As regular readers know, the primary “transmission mechanism” between economic data like the (NFP) report and market movements is through central bank policy. In other words, the monthly jobs report should always be interpreted through its impact on the Fed policy.

Against that backdrop, this month’s NFP report comes out at a bit of an awkward time; after all, the FOMC just announced its plans to taper asset purchases earlier this week, and it looks like the path for monetary policy is relatively set for the next eight months as the Fed gradually slows down its stimulus.

Put simply: The next several jobs reports are unlikely to influence monetary policy meaningfully unless they’re dramatically better or worse than expected for a sustained period. That said, there may still be implications for fiscal policy as a major stimulus program winds its way through Congress as fears of inflation rise for the first time in decades. In any event, traders and economists expecting 455K net new jobs in this month’s NFP report, with the average hourly earnings figure expected to rise 0.4% m/m: 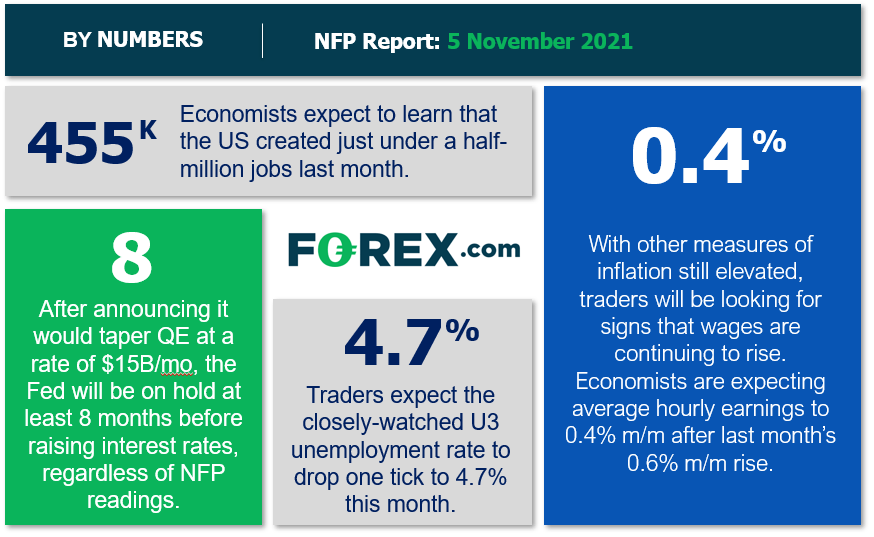 Are these expectations justified? We dive into the key leading indicators for Friday’s critical jobs report below!

As a reminder, the state of the US labor market remains more uncertain and volatile than usual as it emerges from the unprecedented disruption of the COVID pandemic. That said, weighing the data and our internal models, the leading indicators point to a slightly below-expectation reading in this month’s NFP report, with headline job growth potentially coming in somewhere in the 250-450k range, albeit with a bigger band of uncertainty than ever given the current global backdrop.

Regardless, the month-to-month fluctuations in this report are notoriously difficult to predict, so we wouldn’t put too much stock into any forecasts (including ours). As always, the other aspects of the release, prominently including the closely-watched average hourly earnings figure which rose 0.6% m/m in September, will likely be just as important as the headline figure itself.

The index has traded roughly flat over the past month, consolidating between resistance in the mid-94.00s and support near the previous highs in the mid-93.00s. That said, the medium-term trend for the world’s reserve currency has been bullish since bottoming below 90.00 nearly six months ago, so traders may be inclined to buy dips or breakouts in the greenback.

In terms of potential trade setups, readers may want to consider sell opportunities if the pair manages to break below previous support at 1.1525 on a strong US jobs report. After consolidating at 1-year+ lows for the past month, the world’s most widely traded currency pair is vulnerable to a continuation lower if the monetary policy divergence between the US and Europe looks poised to widen further.

Meanwhile, a weak jobs report could present a sell opportunity in . The pair spent the first half of October trending lower before forming a potential bearish flag pattern over the last two weeks. A breakdown from this pattern would re-confirm the bearish momentum and open the door for a continuation toward 1.2100 in time.