In the current market almost everything for the Canadian dollar starts and stops with the price of oil. West Texas Intermediate (WTI) finished at $52.14 on January 29. The next session, February 1, the USD/CAD closed at 1.2861, the highest it had been and the lowest for the loonie, since December 22. 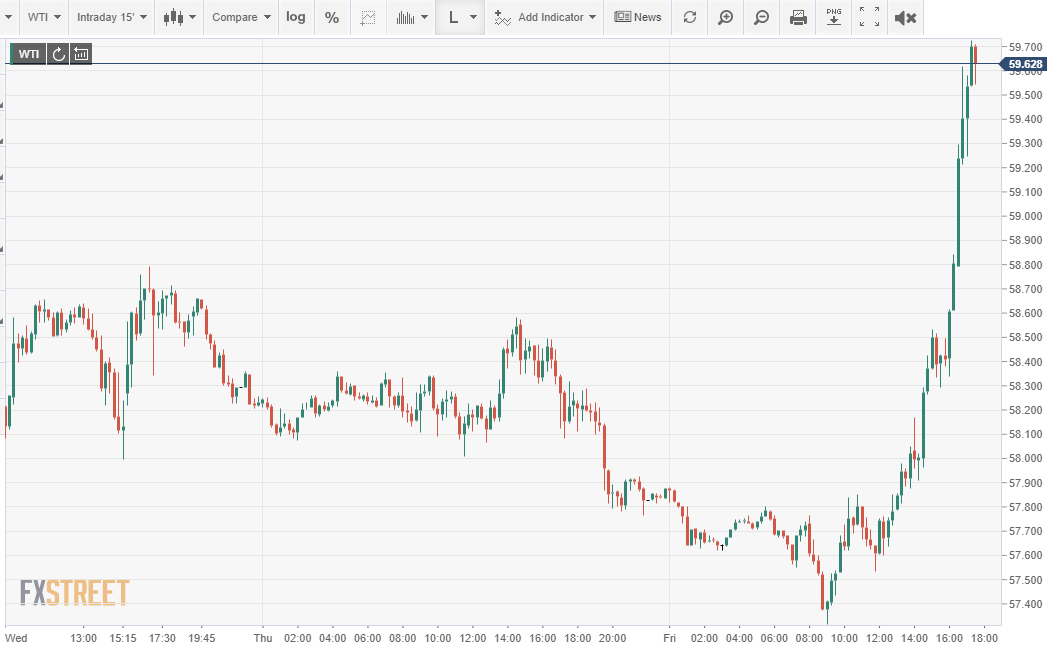 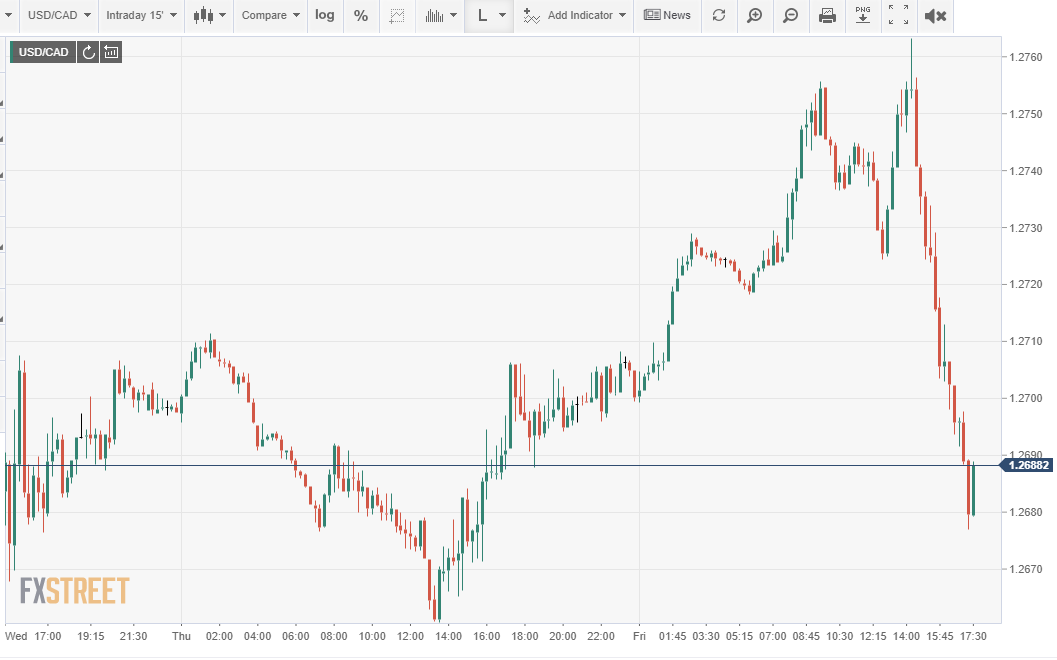 This week’s strength in the loonie dollar came despite a terrible Net Change in Employment report for January last Friday. The Canadian economy shed 212,800 jobs more than four times the -47,500 forecast and the second loss in a row.

In the US payrolls rose 49,000 in January. The Canadian unemployment rate climbed to 9.4% in January from 8.9%, in the US it fell to 6.3% from 6.7% and yet the US dollar fell and the Canadian rose. For the loonie, the price of oil and the prospects for the energy market are the strongest components.

The break of the minor descending channel on January 27 has lost its significance as the USD/CAD faltered at 1.2900. The failure on February 1 at 1.2863 to breach the January high of 1.2881 has proven to the deciding point.

American data did not suggest a strengthening recovery with weak consumer prices in January, over 800,000 unemployment claims for the last two weeks and a drop in Consumer Sentiment.

A drop in US Treasury rates mid-week may have help to undermine the USD/CAD. After last Friday’s close in the 10-year bond at 1.1700, the highest finish since March 18, yields dipped to 1.157 on Tuesday and 1.1330 on Wednesday. The yield recovered on Friday to 1.195% but could not contest the impact of WTI on the USD/CAD. 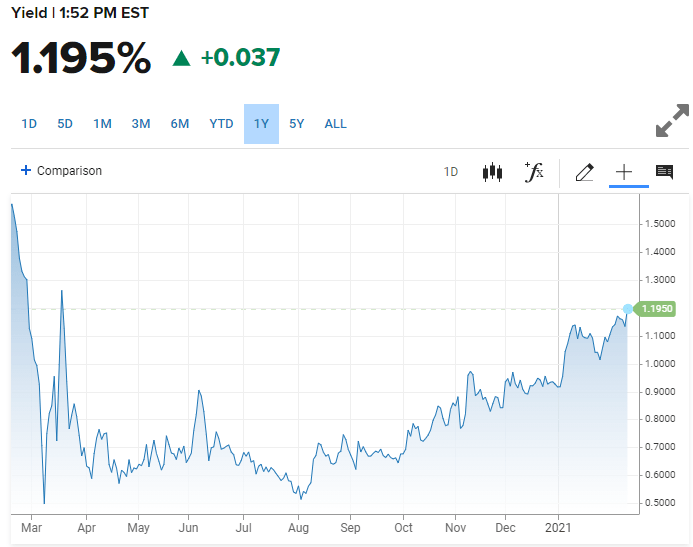 The US stimulus package wending its way through Congress had been one source of recent dollar strength with the logic that whatever its final composition and amount it will boost consumer spending which was dismal in the fourth quarter. Its delay may have added to the USD/CAD decline. Even though January Nonfarm Payrolls were on target at 49,000, the much stronger ADP report and the continuing strength of the Purchasing Managers’ Indexes had given a lift to late expectations, and the status quo report in that light was a disappointment.

There has also been a minor revival of inflation concerns even though there is no evidence of such and Federal Reserve Chairman Powell has discounted it. The size of the US budget deficits over the past five years and the continual money creation by the government is a classic prelude to inflation. 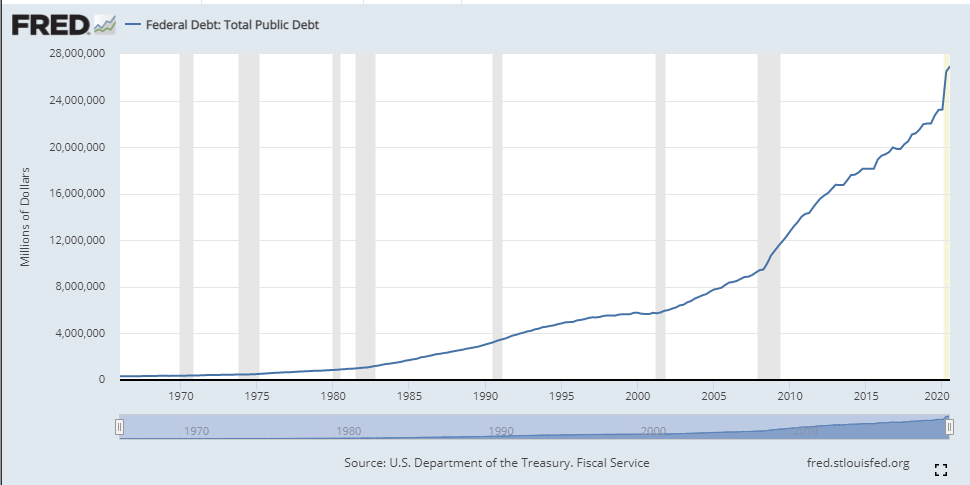 Finally Chairman Powell’s dovish comments in a speech to the Economic Club of New York on Wednesday that the labor market remains weak and the bank is not considering a rate increase or a reduction in the bond purchase program may have detracted from a rising dollar based on higher Treasury rates.

The competition for supremacy between the Canadian and US dollars is a contest tilting the American economy against the price of oil.

This week oil won with WTI rising, poor US data and a less than optimistic Fed.

Looking ahead to Wednesday January’s US Retail Sales will set the stage for first quarter consumption. After three negative months in a row, the forecast modest rise is essential for greenback improvement.

Without better US statistics and a completed stimulus package it will be difficult for the USD/CAD to gain ground against an energized oil market. Even rising US Treasury rates, the 10-year closed at 1.195%, did not deter the oil-fueled gains of the loonie. The dominance of oil pricing on the USD/CAD over the direct evidence of a contracting Canadian labor market in Janaury is not illogical.  Nothing can create jobs in Canada as effectively or quickly as the energy sector.

Technically, the eight-month descending channel maintains its grip exhibiting a succession of lower tops with each recovery, even though the five-figure wide channel has ample room for consolidation. Support at 1.2700, the close on Tuesday, Wednesday and Thursday did not hold on Friday in the face of a relentlessly bid WTI. 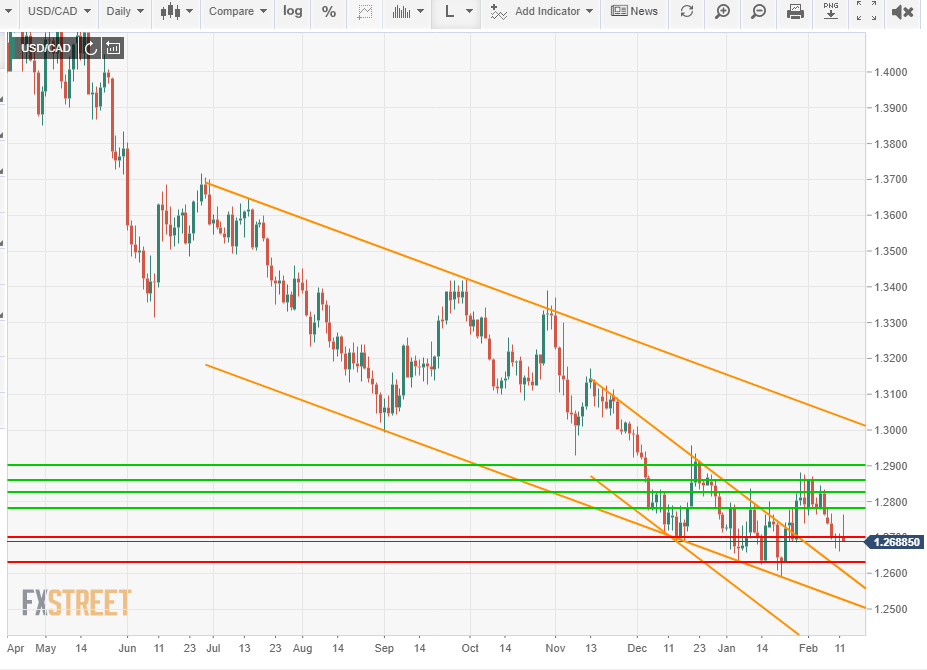 In a speech to the Economic Club of New York on Wednesday, Federal Reserve Chairman Jerome Powell was neutral on the state of the US economy and stresssed the need for continuing monetary policy and fiscal support. He said that the job market remained weak though improved from the worst of the recession. He indicated that the central bank isn’t considering an increase in the fed funds rate or a reduction in the $120 billion of monthly credit purchases designed to keep interest rates low.

Consistent with the Fed’s focus on employment, Mr Powell observed that four million jobless workers have dropped out of the labor force and are not counted in the standard (U-3) unemployment rate at 6.3%. Were these workers included the rate would be close to 10%. He noted that among the highest-earning quarter of the population job loses have been 4%, while layoffs among the bottom quarter were 17%.

The Consumer Price Index in January rose 0.3% as expected, down from 0.4% in December. Annual CPI climbed 1.4% as in December on a 1.5% estimate for January.

Core CPI was flat in January missing the 0.2% prediction, after a 0.1% gain in December. The annual rate was 1.4%, under the 1.5% prediction and December’s 1.6% rate. Wholesale Inventories rose 0.3% in December more than the 0.1% estimate and November rate.

The Michigan Consumer Sentient Index slipped to 76.2 in February from 79 in January. A reading of 80.8 had been forecast. 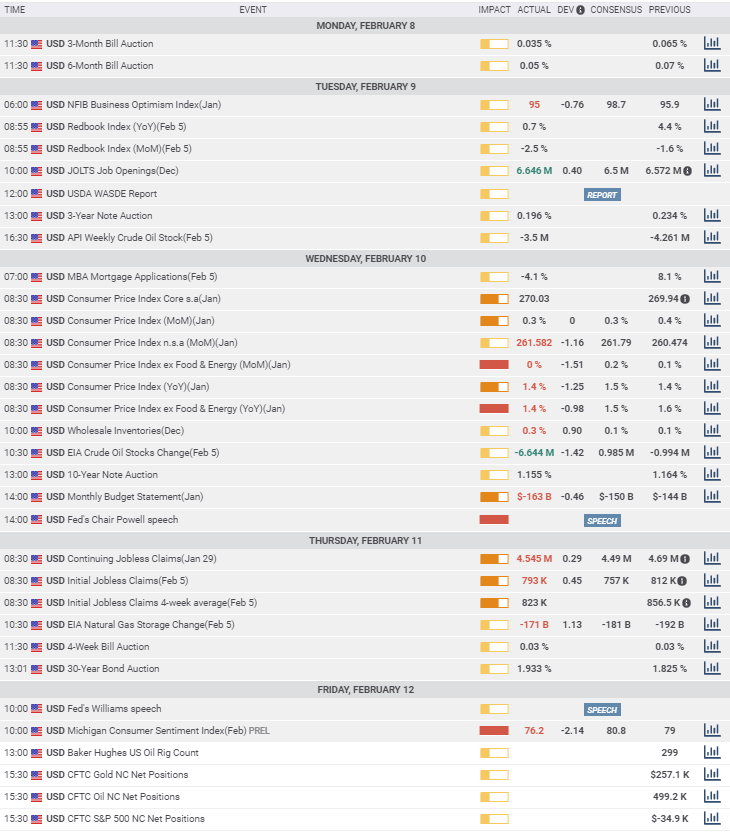 Retail Sales for December and Housing Starts for January have the most potential for impact.

Manufacturing Sales for December are due. They fell 0.6% in November.

Housing Starts (YoY) in January are scheduled, they were 228,300 in December.

ADP Employment Change for January is out. December shed 28,800 positions.

Retail Sales in December are expected to rise 0.1% after gaining 1.3% in November. Sales ex autos are forecast to add 0.3% following a 2.1% increase in December. 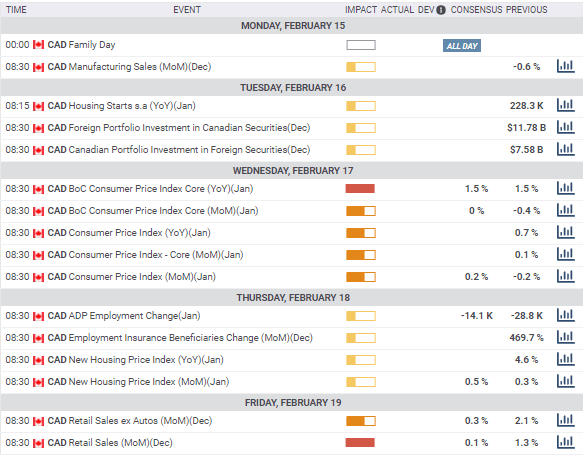 Retail Sales for January predominate. After three unusual negative months markets want to know if the fourth quarter decline in sales has ended now that the California lockdown is over. Variation will translate to the dollar.

The Philadelphia Fed Manufacturing Survey is expected to drop to 20 in February from 26.5 in January. Initial Jobless Claims are forecast to be 775,000 in the February 12 week. Continuing claims are projected to rise to 4.575 million. Housing Starts are expected to rise 0.6% in January to 1.654 million following 5.8% and 1.669 million previous. Building Permits are estimated to drop to 1.654 million after 1.704 million in December.

Existing Home Sales are forecast to drop 2.7% in January to 6.56 million annualized after 0.7% and 6.76 million in December. Markit Services PMI for February is projected to drop to 57.5 from 58.3 in January. Markit Manufacturing PMI is expected to fall to 58.5 in February from 59.2 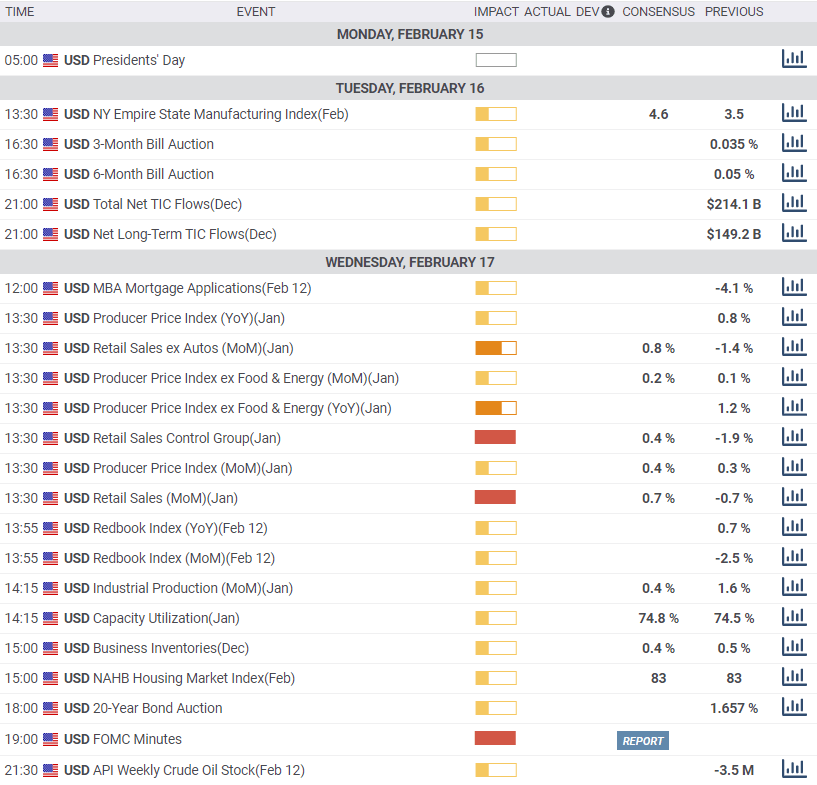 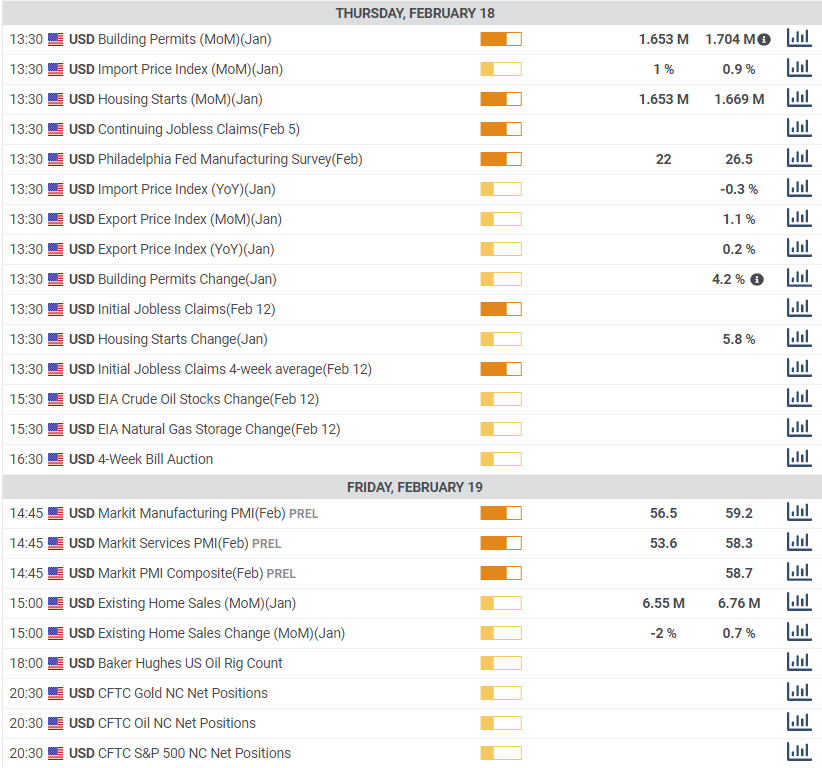 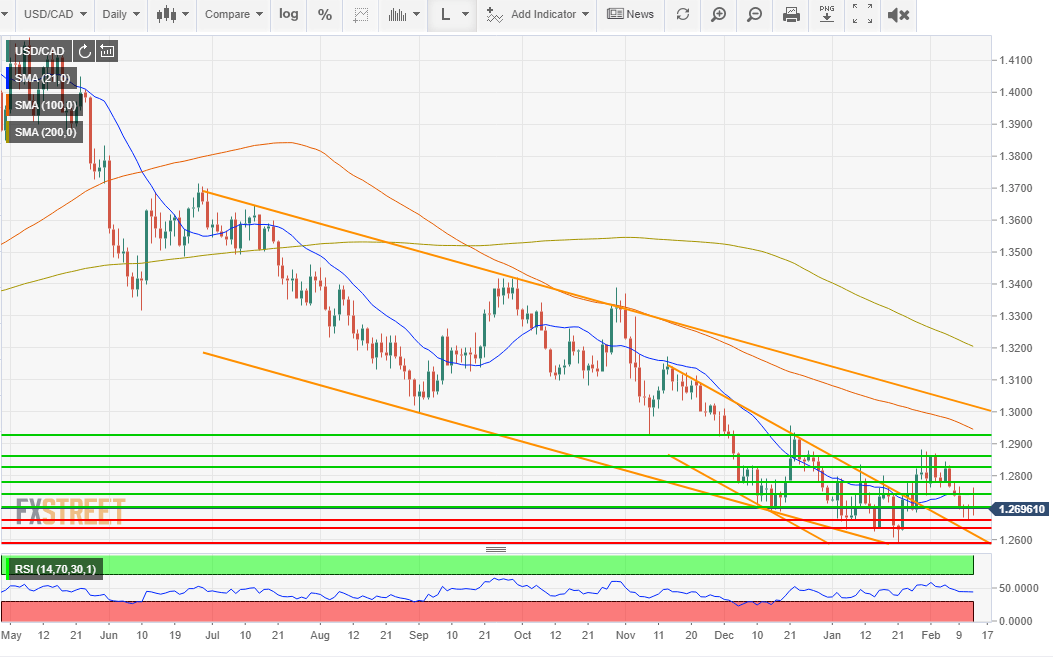 The reactive collapse in USD/CAD on Friday as WTI raced to a new 13-month high into the London close took no notice of the formerly steady support at 1.2700 and the close below leaves a heavy flavor on the pair to start the new week.

With its run to nearly $60 on Friday WTI is about at the half-way point of its range from January 2019 to the start of the pandemic in the US in March 2020. If, as expected, the US and global economies begin to show signs of revival, WTI should trade higher, especially as the range for 2018 was above $65 for most of the year and reached $76.80. Given WTI’s demonstrated link to the Canadian dollar the bias for the USD/CAD is lower. 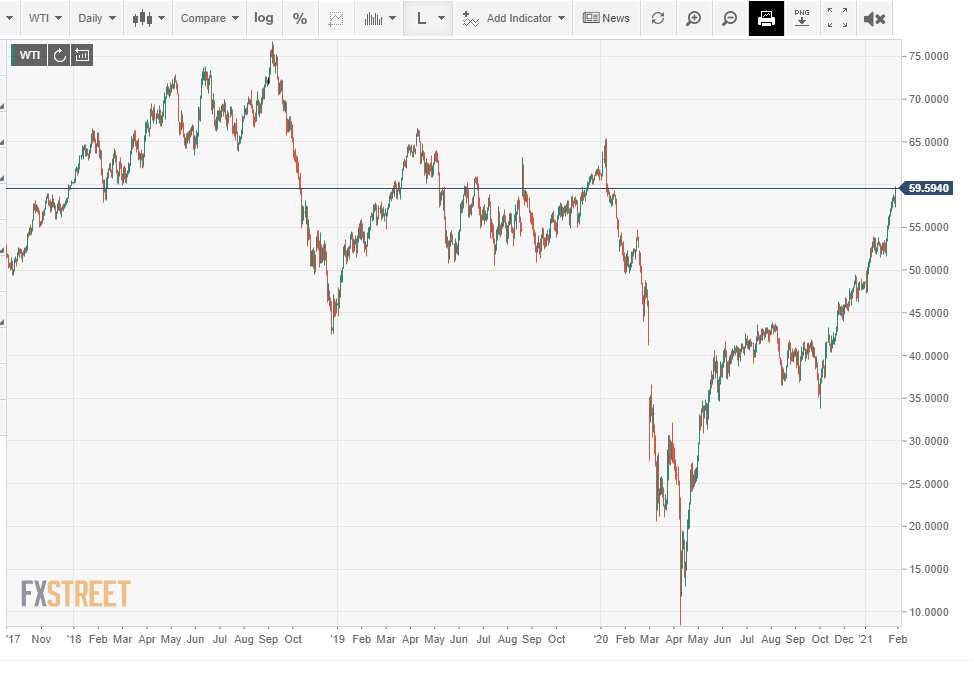 The FXStreet Forecast Poll  is mildly bullish out to one quarter. It is not a rising trend but a consolidation near the middle of the descending channel. The reaction of the USD/CAD to rising crude oil prices makes further losses a distinct posibility.