The USD/NOK has resumed its bearish momentum in early trading this morning, and is now challenging crucial technical support last tested in late June.

Technical traders will need to pull out 6-month charts to try and gain a perspective on the bearish momentum the USD/NOK has demonstrated. Vital lows not seen since the 25th of June are now being challenged, and if these support structures prove vulnerable, bearish speculators may begin to contemplate additional legs downward which could test May to mid-June prices.

As of this writing, the USD/NOK is near the 8.43000 ratio and if the pair proves the 8.40000 mark can be penetrated this could ignite additional bearish momentum. However, the current price vicinity of the USD/NOK is actually crucial quite now, if the 8.43000 value is not able to be sustained the 8.40000 level could be viewed as a potential speculative location to try and look for short-term reversals higher by traders who think the downside action has been too strong.

Some speculators may be tempted to stand in front of the selling momentum which has clearly been demonstrated by the USD/NOK the past couple of weeks, but they should use stop loss orders to protect them if the pair continues to move lower. Conservative traders who want to pursue the current trend cannot be faulted. Waiting for slight moves higher, and looking to take advantage of a natural cycle which then begins to test support levels below is a solid decision. In order to do this, entry levels must be selected carefully and take profit orders need to be implemented effectively.

If USD/NOK continues to trend lower in the near term, the 8.40000 mark may prove to be a huge signal. If the 8.39000 to 8.36000 ratios begin to be tested it may indicate an additional stronger leg downwards could develop. 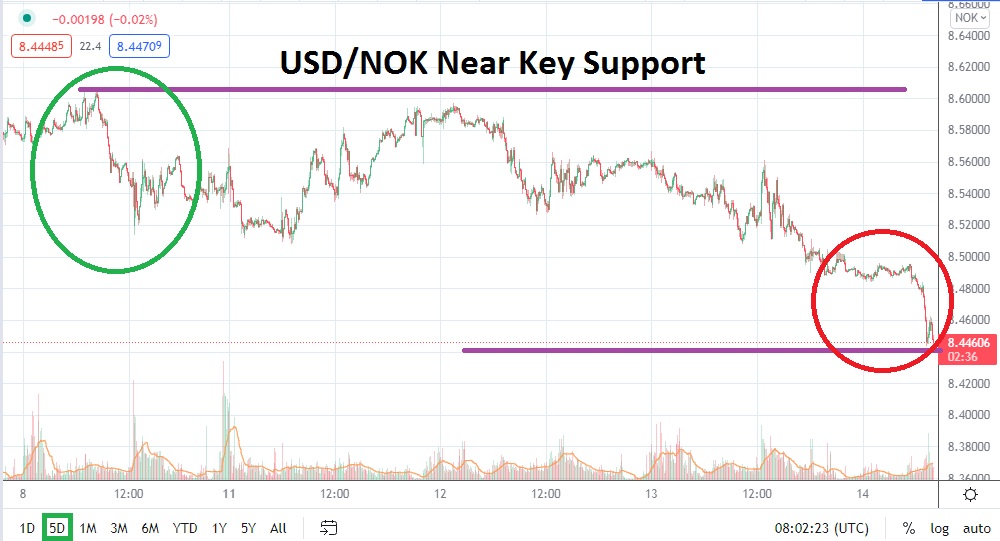