The Turkish Lira weakened dramatically on Tuesday as Prime Minister Recep Erdogan called for lower interest rates in Turkey. Immediately following the comments, USD/TRY soared to 8.805, reflecting a reaction to Erdogan’s remarks but also broad USD strength that grew throughout the trading day.

Erdogan’s comments will have central bank hawks on the edge of their seats, given his willingness to make changes in the bank’s leadership. Recent history suggests that failure to “toe the line” and listen to Erdogan’s demands may result in more upheaval at Turkey’s central bank. The uncertainty surrounding leadership may only continue to add to the volatility and lack of clarity surrounding USD/TRY. Additional replacements, or a rate cut, may potentially be the catalyst required to take USD/TRY above its yearly high at 8.779. 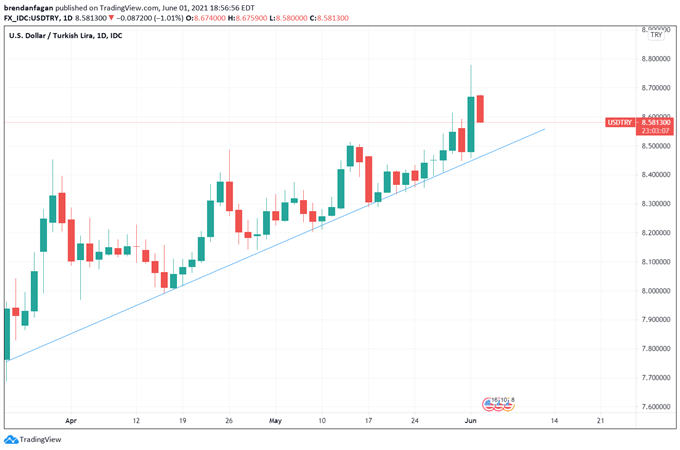 A consolidation of the recent move upwards may see USD/TRY retest its ascending trendline from April, which can be found below around 8.470. Additional weakness in the Greenback may also help the Turkish Lira recover some strength following Erdogan’s explosive comments. However, any rate cut or change in leadership at Turkey’s central bank may be enough to negate any efforts to strengthen the Lira. One of the two scenarios, or a combination of the two, may see USD/TRY continue to make new yearly highs above 8.80.