Undoubtedly, expectations of raising US interest rates helped US dollar pairs achieve strong and sharp gains. The USD/JPY in particular launched towards the 115.52 resistance level, its highest in six years, before settling around the 115.32 level as of this writing. The Thanksgiving American holiday will affect the liquidity in the markets. The announcement of stronger growth in the gross domestic product of the United States and the decline of weekly jobless claims to the lowest in fifty years contributed to the strong stability of the US dollar against the rest of the other major currencies.

Just days before the November 10 data release, the US Federal Reserve laid out its plan to begin ending the bank’s bond-buying stimulus program by reducing purchases of government bonds and mortgage bonds in increments of $15 billion per month from about $120 billion a month in November. The process would have seen the Fed end its purchases around the middle of next year although even before Wednesday three members of the Fed’s Board of Governors had suggested they might soon be willing to scale back QE at a faster pace.

Commenting on this, Richard Vranulovic, FX analyst at Westpac says, “We can certainly see a less favorable US dollar story forming sometime in the first half of 2022; The labor supply will almost certainly respond when excess savings are stripped away, global supply bottlenecks begin to subside (charging rates are now down and used car prices are at their peak) and the underlying effects shift, bringing annual inflation rates down considerably. But the markets won’t have any of that now.”

The trend in US inflation and the likelihood of a reaction from the Fed gave a five-month rally to the US dollar, and Federal Reserve Chairman Jerome Powell suggested at his monetary policy press conference in November that FOMC members felt they could have to wait until the second and third quarter of 2022 before even considering raising US interest rates.

But he and other policymakers have previously said they had expected the upward trend in inflation to moderate and changes in price growth to begin to subside next year, and with data raising questions about whether that will happen, financial markets have moved into pricing in a hike in US interest rates. It is coming sooner than many had previously expected in what has been a boon for the US dollar.

Yesterday, US New Home Sales increased by 0.4% last month, missing expectations as house prices continued to rise. The Commerce Department reported that sales of new single-family homes rose to a seasonally adjusted annual rate of 745,000 last month from 742,000 in September. Economists had expected October new home sales to come in at a rate of 795,000 annually. September sales rate was revised sharply down from 800,000 in the original trade report.

The US housing market has been hot, thanks to low mortgage rates and pent-up demand from consumers locked in last year by the pandemic. Earlier this week, the National Association of Realtors reported that US previously occupied home sales rose 0.8% last month to a seasonally adjusted annual rate of 6.3 million, the strongest annual rate since January.

We noted that a break through the 114.00 psychological resistance will open for moves to stronger higher levels which will push the technical indicators towards strong overbought levels. Profit-taking will occur if the dollar’s momentum stops due to expectations of raising interest rates. On the downside, there will be breakouts of the current trend if the pair moves towards the support levels 114.60 and 113.50. The currency pair is not awaiting any important and influential US economic data today, in light of the American holiday that affects the liquidity of the markets. 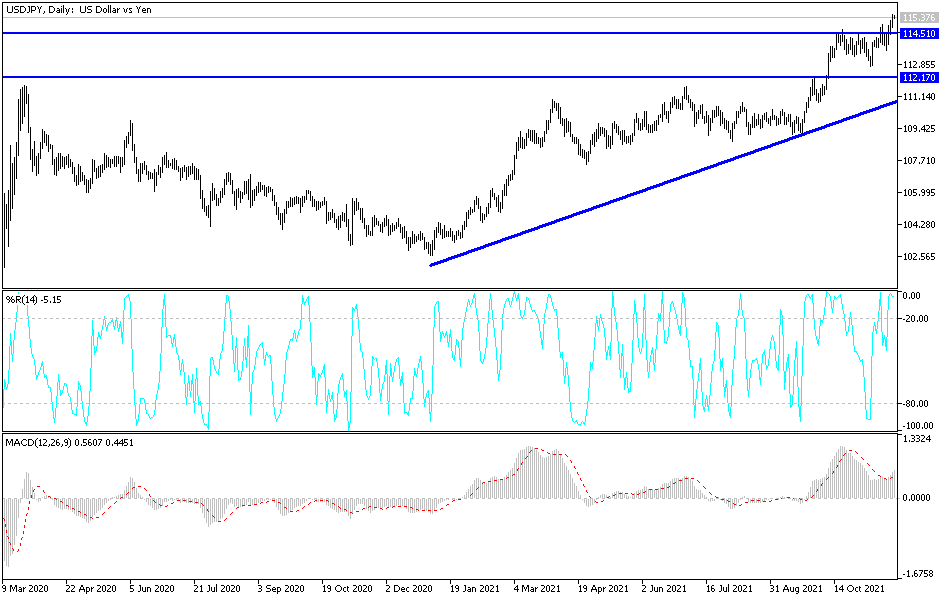