The US dollar rose strongly in the Forex market after Joe Biden nominated Federal Reserve Chairman Jerome Powell for a second term. The White House also revealed that Biden had nominated current Federal Reserve Governor Lyle Brainard for the position of Vice President of the Federal Reserve System. Accordingly, the bulls in the USD/JPY currency pair moved towards the 115.23 resistance level in early trading today, its highest in six years, before settling around the 114.92 level as of this writing and prior to the most important trading sessions for this week.

The White House said that the economic recovery “is a testimony to the success of the president’s economic agenda, and is evidence of the decisive measures taken by Jerome Powell and the Federal Reserve to mitigate the impact of the epidemic and return the American economy to the right track.”

On the economic side, according to a report from the National Association of Realtors, existing homes in the United States unexpectedly increased 0.8% to an annual rate of 6.34 million in October after rising 0.7% to an average of 6.29 million in September.

A weak yen enables exporters to earn more if they return profits abroad and helps sharpen the competitiveness of Japanese-made products abroad, but this is likely to drive up energy and food prices in the country, putting pressure on households. If private consumption, which accounts for more than half of Japan’s GDP, weakens, the pace of economic recovery from the COVID-19 pandemic will almost certainly slow.

“The US may print its monetary policy earlier than expected, and the dollar is likely to remain in the 115 yen range until early next year,” said Ryota Abe, an economist at Sumitomo Mitsui Banking Corp in Singapore.

Crude oil prices have also risen due to an increase in energy demand combined with a recovery in industrial activity, which has prompted Japan and the United States, among other countries, to consider freeing oil from their reserves. Accordingly, Masahiro Ichikawa, chief market strategist at Sumitomo Mitsui DS Asset Management, said that “although the weak yen raises import costs for companies, the negative impact on the Japanese economy will be limited at the current level.”

“The quick buying of the dollar is likely to be temporary and the yen is not expected to weaken further,” he added.

The general trend of the USD/JPY is still bullish, and a break through the resistance at 115.20 will strengthen it, and push the technical indicators towards strong overbought levels. On the downside, there will be no breakout of the trend without moving towards the support levels 113.90 and 112.00, otherwise the general trend for the USD/JPY will remain bullish.

The currency pair will be affected today by risk appetite, as well as the a slew of important economic releases ahead of the long US Thanksgiving holiday, which may affect liquidity in the markets.

The releases will include the GDP growth rate, durable goods orders, the number of weekly jobless claims, the personal consumption expenditures price index, the Fed’s preferred measure for measuring US inflation, and then the content of the minutes of the last meeting of the US Federal Reserve. 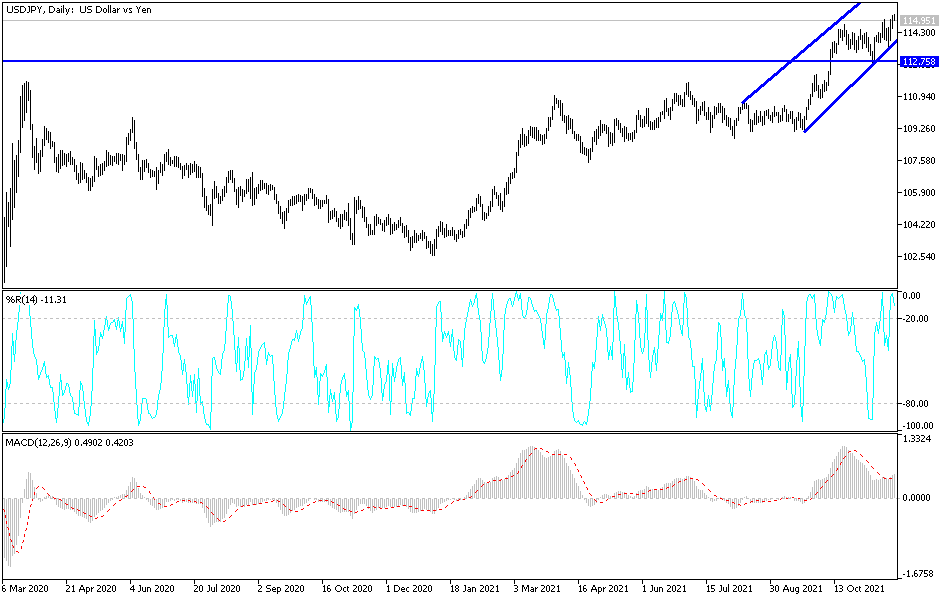