For three trading sessions in a row, the USD/JPY currency pair is trying to correct higher ahead of the release of US inflation figures.

The rebound gains for the pair did not exceed the resistance 109.65, which is stable around time of writing. Financial markets and investors are looking forward to today’s US inflation data, in search of clues about a curtailment of the asset purchase program by the Federal Reserve. There is a widespread feeling that any significant rise in US consumer price inflation could prompt the Fed to consider discussions about scaling back its bond-buying program.

According to economists, consumer price inflation is likely to rise to 0.4% month over month in May, to an annual rate of 4.7%. Core CPI is expected to come in at 0.4% MoM and 3.4% YoY. Data from the Commerce Department showed that wholesale inventories in the United States rose 0.8% from the previous month to $698.0 billion in April, after seeing a 1.2% increase in the previous month.

China posted a smaller than expected rise in consumer prices last month but a bigger rise in producer prices. Lower food prices helped cool consumer price hikes to 1.3% instead of the 1.6% average Bloomberg survey had expected. Lower pork prices helped keep food prices in check, while non-food prices rose 0.9%. Producer price inflation accelerated to 9.0% from 6.8%. The median forecast was 8.5%. Oil, minerals and chemicals were the driving factors. Beijing is trying to mitigate lower producer prices by cracking down on unauthorized activities, but that doesn’t seem enough. The US central bank still believes that the strong rise in inflation levels is due to temporary factors and that it will not change its policy except in permanent cases of strong inflation. On the coronavirus front and global vaccination efforts, the United States will purchase an additional 500 million doses of Pfizer’s COVID-19 vaccine to be shared through the COVAX Alliance to donate to 92 low-income countries and the African Union over the next year. US President Joe Biden is expected to announce Thursday in a speech before the start of the G7 summit. 200 million doses – enough to fully protect 100 million people – will be shared this year, with the rest to be donated in the first half of 2022. This announcement comes days after the White House revealed its plans to start sharing the current US vaccine surplus with the world. In contrast. Japanese Prime Minister Yoshihide Suga has said he aims to vaccinate everyone in the country by November, a goal he has set through general elections due later this year. Suga called vaccines a “trump card” for anti-virus measures and stated, “I want the vaccines to be given by October-November to all people who want to be vaccinated.” The prime minister is pushing hard to speed up Japan’s COVID-19 vaccine program ahead of the Summer Olympics, which are scheduled to be held in Tokyo from July 23 to August 8. Japan’s government is aiming for 1 million injections a day until all of the country’s 36 million adults are fully vaccinated by the end of July. He also urged major companies to prepare to start vaccinating their employees later this month to speed up the process ahead of the Olympics.

Less than 4% of Japan’s population had been fully vaccinated as of Tuesday, according to government figures.

According to the technical analysis of the pair: the current attempts to correct upwards for the USD/JPY currency pair will not succeed without breaching the 110.00 psychological resistance level, which technically increases the currency pair’s purchases, and thus moving towards stronger ascending levels that end on downside fears, which are still valid, especially if it returns The currency pair to move below the support level 108.80. The currency pair will be strongly affected today with the release of the US Consumer Price Index and the number of weekly jobless claims. 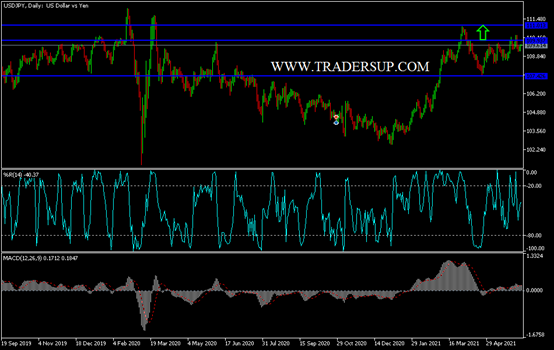