Sentiment and activity in the US manufacturing sector improved more than forecast in July with the forward looking new orders index at its highest level in two years, though the employment gauge trailed the general optimism.

The purchasing managers index (PMI) from the Institute for Supply Management (ISM) climbed to 54.2 last month from 52.6 in June. It was better  than the 53.6 estimate despite the conviction among some analysts that the summer surge in Covid cases would derail the recovery in a factory sector hard-hit by the pandemic closures and the trade war with China.

Employment edged higher to 44.3 from 42.1 in June missing the 48.1 prediction by a wide margin.  The new orders index reached 61.5 in July its highest reading in 22 months. It has more than doubled in three months from its April shutdown low of 27.5. Prices improved to 53.2 from 51.3 in June. “Sentiment was generally optimistic” among manufacturers according to the ISM survey. 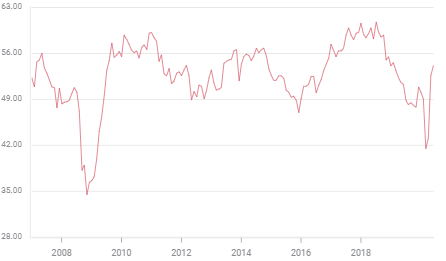 The nearly complete shutdown of the US economy in March and April plunged economic activity and especially the manufacturing industry to a nadir not touched since the financial crisis of a decade ago.

Recovery began with the partial reopening of some states in late April and has continued despite the large increase in positive Covid tests in several of the largest and most economically important US states like Texas, Florida and California.

Though hospitalizations and fatalities in the affected states have trailed the spring outbreak by wide margins and have not come close to overwhelming the public health systems the impact on consumer traffic and business failures seems to have driven initial unemployment claims higher in the last two weeks.

Manufacturing is about 15% of US GDP but it is considered a leading indicator for the overall economy because of the longer lead time for production and the higher skill levels of its employees.

Employment is a trailing indicator. Companies normally wait until they are sure a new employee is justified before hiring and incurring the additional  payroll costs.

The limited improvement of the manufacturing employment index in July could be the inherent delay in personnel decisions or it might be evidence that higher Covid cases are exacting extra caution from businesses. 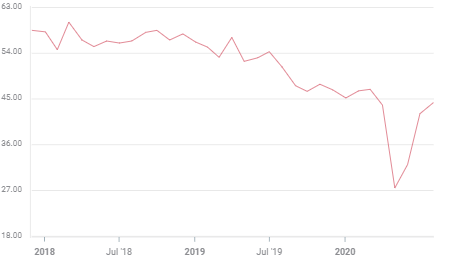 Economists have taken the second view and the consensus forecast for July’s non-farm payrolls is just 1.65 million, barely one-third of June’s record 4.8 million hires.  With 22.16 million lost jobs in March and April and only 7.499 recalled in the following two months, the July estimate would be a sharp deceleration in the pace of recovery.

Producers of transportation equipment, machinery and metal fabrication reported contraction.  In the ISM indexes readings above 50 denote expansion and scores below, contraction

While the overall tone of the report was positive the employment index showed reluctance to hire.

It may be that manufacturing industries are, for logical reasons, more cautious about hiring than the far larger service sector.  Friday’s payrolls will tell us if the survey accurately represents factory employment decisions and if that caution carries over to service industries.