Today’s focus will be largely placed on the upcoming FOMC meeting. Although, with no updates to economic projections (due in June), expectations are for the Fed to maintain its accommodative stance, while also remaining modestly optimistic over the economic outlook. With that in mind, any changes in the policy statement will be carefully watched (although not expected), so to will Chair Powell’s press conference for any hints on signalling a possible timeline to taper asset purchases. That being said, my view is that it would be too early for the Fed to begin hinting at tapering asset purchases, particularly after last month’s credibility test and thus the Fed will likely opt to reiterate its current stance. To add to this, USD vols suggest no fireworks are expected at today’s meeting.

US data has gone from strength to strength in recent months with the trend expected to continue in Q2. As such, if the Fed were to slightly alter their language it would likely lean on the hawkish side. However, with that in mind, it does appear the market has been slightly adjusting for a possible hawkish outcome amid the move higher in US yields over the past two sessions, which in turn has underpinned the greenback (most evident against JPY). A factor that I mentioned could come into play yesterday.

That said, as I mentioned above, my view is that the Fed sticks to the current script, which could see the pre-FOMC adjustment being unwound on a completely unchanged outcome, meaning yields softer and USD weaker. The chart below shows last month’s FOMC reaction, where markets had been modestly pricing in a chance that the Fed could shift its dot plot to signal a 2023 hike. However, the Fed defended its AIT policy meaning that the dot plot was left unchanged, resulting in USD selling and yields lower. 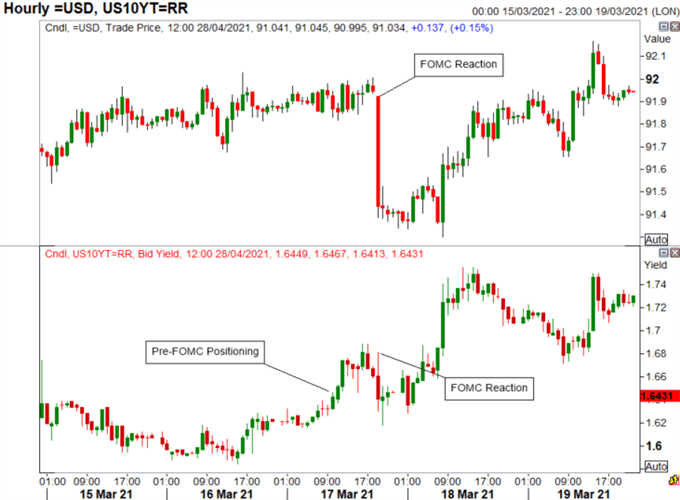 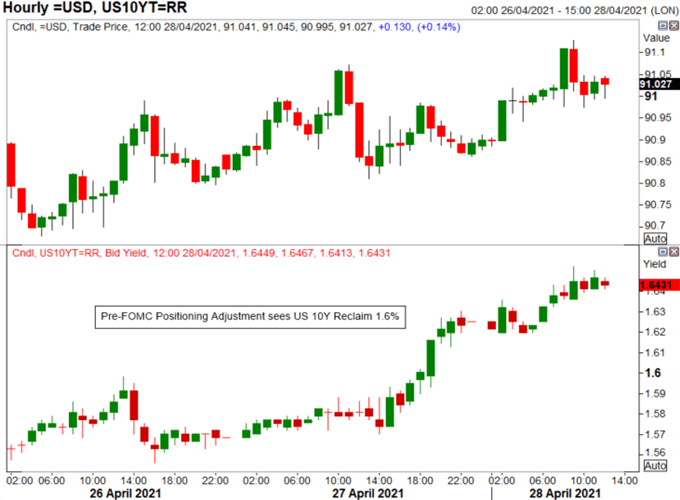 EUR/USD: Resistance at 1.21 has proved to be a tough level to crack on its first attempt. The move higher in US yields has also not helped matters for the Euro, resulting in a consolidation of the currency’s recent recovery. Good support resides at 1.2024 (50% fib), while further support lies at 1.1990. For now, the outlook remains constructive for the pair as the EU plays catch up with inoculation rates rising, although, upside is likely to be negated should the pair close below the 200DMA (1.1937). That said, yesterday I noted that with month-end rebalancing soon upon us, flows are expected to be negative for the USD, given a stellar month for US equities. (full report) 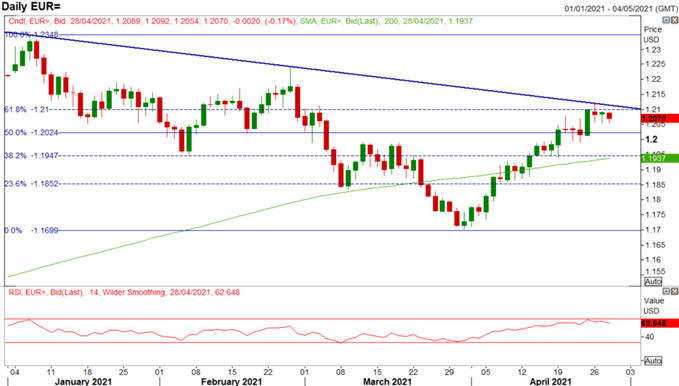 AUD/USD: Soft CPI overnight sees AUD/USD once again spend little time above 0.78, which will embolden the RBA’s dovish stance. Downside curbed by the 50DMA however, while key support resides at 0.7690-0.7700. For now, the pair remains rangebound and thus will take its cue from risk sentiment with domestic data now out of the way. A topside breach above 0.7820 opens the door towards 0.80, while close below 0.7690 leaves the pair vulnerable to a move towards the 0.76 handle. 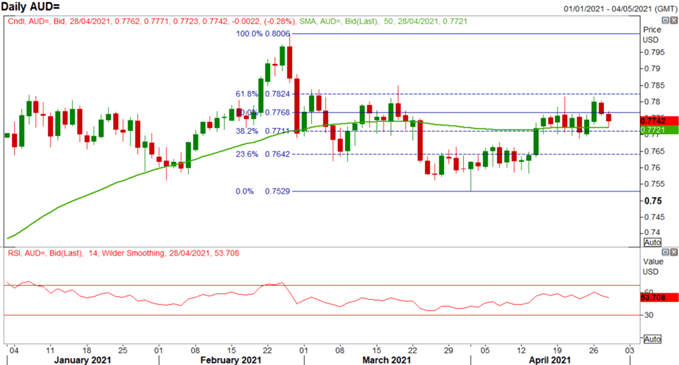