The market’s initial reaction to the Federal Reserve and the was that it was dovish: the yield slipped, and was sold to new lows.

In fact, the two countries that appear to be ahead of the curve among high-income countries, Canada and Norway, saw their currencies rally to new three-year highs. However, Asia and Europe have seen it the other way. 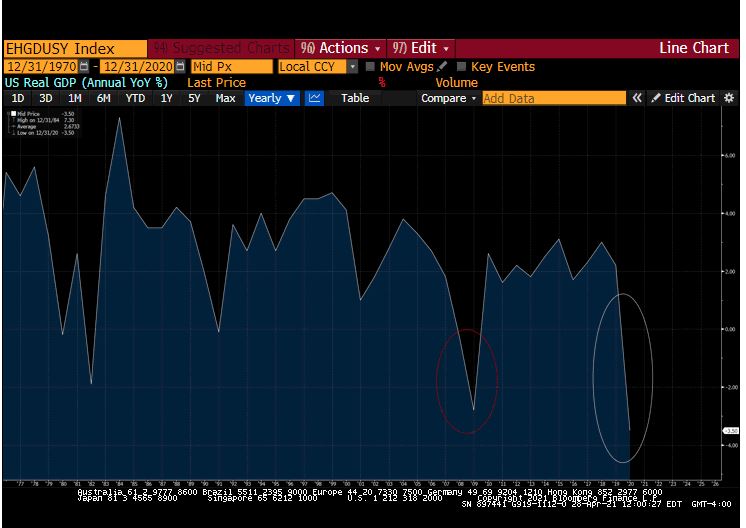 US yields have recovered and helped the dollar. Asia and European equities have shrugged off the nonplussed US response. Besides Japan, where the markets were closed for a local holiday, Asia Pacific equities advanced. South Korea’s was a notable exception.

In Europe, the Dow Jones was approaching last week’s high record high. US futures were also pointing to a strong opening, helped by a series of strong earnings from tech giants.

The US 10-year yield is near 1.66%. Recall that the yield peaked in late March near 1.77% before falling to around 1.52% this month. The yield has risen about 10 basis points this week. European yields are also firm, and , , , and benchmark yields were recording new three-month highs today.

The greenback was broadly firmer, but only after yesterday’s losses were extended in early Asia. The initially rose to $1.2150, and the dollar fell to about JPY108.45. On the other hand, emerging market currencies were trading better, led by the Indian , which was rising for a fourth consecutive session amid talk of strong foreign demand for local shares, and the Chinese rose to almost two-month highs. The JP Morgan Emerging Market Currency Index is up a little more than 1% this week.

initially extended its gains but faltered near $1790 as US yields and dollar found traction. was firm, and the June WTI contract was trading near yesterday’s high, near $64.40. Recall that last week, and at the start of this week, it found support near $60.60.

Japan’s markets were closed to celebrate Showa Day (Emperor). Tomorrow it reports (expected flat at 2.9%) and no change in the (1.09), Tokyo CPI unchanged at -0.2% and rate may be flat from -0.1%), and March which is expected to have slumped by 2% (after a 1.3% decline in February). The Ministry of Finance also reports the weekly portfolio flows and note Japanese investors have stepped up their foreign bond-buying in recent weeks.

Australia confirmed that it is experiencing a positive terms-of-trade shock. Its is rising much faster than its and more so than the market expected. In Q1, export prices jumped 11.2% (Bloomberg median forecast was for 9.0%) after a 5.5% gain in Q4 20. Import prices were also stronger than expected, rising by a marginal 0.2% (Bloomberg median forecast was for a decline of 1.6%) after a 1.0% decline in Q4 20.

Separately, Australia also reported that Chinese tariffs on its wine have a powerful impact. Australian exports of wine to China fell from A$325 mln in Q1 20 to A$12 mln in Q1 21. Lastly, comments by Australia’s Treasurer, Josh Frydenberg, suggested an alignment with the central bank on wanting to drive the rate lower, which implies additional fiscal support in the May 11 budget.

The dollar has nearly recouped its losses against the in full as it probed the JPY109 area in the European morning. There is an option struck there for $1.3 bln that expires today. The JPY109.20 area is the (50%) retracement level of this month’s decline. The key driver continues to appear to be US yields.

The Australian dollar made a marginal new high for the month, just shy of $0.7820, but again was rebuffed and was trading below $0.7780 in the European morning. Note that it was alternating between gains and losses since Apr. 15, but is extending its gains for the fourth consecutive week.

The Chinese yuan was trading higher today for its fourth consecutive advance. In fact, the yuan has fallen in only one session in the past three weeks. The greenback’s low today around CNY6.4660 has not been seen since early March. The PBOC’s dollar fixing continues to be in line with expectations. The offshore yuan () was trading a little firmer than the onshore yuan (CNY). Note that tomorrow, China reports its April PMI, which is expected to be a touch softer than March, and the PMI, where a small uptick is anticipated.

Ahead of tomorrow’s preliminary estimate of EMU’s April , and figures were available today. In Spain, upward pressure on prices is still evident. The jumped 1.1% on the month following March’s 1.9% gain. This lifted the pace to 1.9% from 1.2%.

Both readings were 0.2 percentage points above expectations. Most of the rise seemed to come from higher energy prices, while food prices looked softer. Core CPI (excluding energy and fresh food prices) rose 0.4%, and the increase was steady at 0.3%.

German states have reported their April CPI figures, and the report is due today. The rate was still rising, helped by the return of the VAT and higher energy prices. The EU harmonized measure may edge higher from the 2.0% year-over-year pace reported in March.

Separately, German employment data was a bit softer than expected. Although the rate was steady at 6.0% in April, the number increased by 9k, disappointing market forecasts for a 10k decline.

With new border checks between Northern Ireland and the rest of Britain and civil unrest by loyalists, it should not be surprising that the head of the Democratic Unionist Party in Northern Ireland, Arlene Foster, will step down. There has been talk about this for some time.

Foster was on the wrong side of some social issues compared to many in her party, which may help account for the timing of yesterday’s announcement. The UK holds local elections next week, and while Scotland and Wales local parliament is included, the Northern Irish local government election is not until May 2022.

Stronger business confidence in the euro area failed to do much for the euro. It had extended its recovery off the Mar. 31 low near $1.17 to reach its best level since Feb. 26 today ($1.2150) before sellers re-emerged.

Sterling poked briefly above $1.3975 for the first time in seven sessions, but it too has consolidated in the European morning. Last week’s high was just shy of $1.4010,  but sterling has not closed above $1.40 since late February. The market does not appear to have given up and may have another go at it today.

Literally and figuratively, there was little new from the Federal Reserve. Except for a handful of sentences, the statement was identical with the March statement, which itself was mostly a duplicate of the January statement. Fed Chair Jerome Powell’s press conference did not cover new ground or reveal new insight into the central banks’ reaction function.

The part of the statement that did change was the review of economic developments. The Fed did marginally upgrade its assessment. The sectors hardest hit by the public health crisis remain weak “but have shown improvement.”  Also, in January and March, the Fed warned of “considerable risks.”  Now it says, “risks remain.”

Assuming the economy performs as expected, a further upgrade is likely at the next meeting in June, which also sees updated forecasts. Powell recognized that with the vaccine success, the economy can return to normal later this year. The combination of the easy monetary and fiscal policy, the wealth effect from rising house and equity prices (and assets more generally), and pent-up demand (think services as well as goods), coupled with the vaccine rollout, is fueling a growth spurt.

Still, Powell again repeated the Fed’s assessment that it will still take “some time” to meet the threshold of “substantial further progress. While the growth surge will not last more than a few quarters, many expect that the threshold will be met, allowing the Fed to taper before year-end.

The chart at the top of the page is the year-over-year US . With today’s report, we should see the “V” shape emerge and continue to be drawn out of the next few quarters. This does not negate the “K-recovery,” which is about the distributive gains rather the aggregate gains.

Most important data, besides the volatile , were above the median Bloomberg forecast. That means that economists (or their models) do not appreciate the strength of the economy. It might translate into today’s report, where the median forecast has drifted lower in recent days to 6.6%.

The US also reports weekly claims, which are expected to have fallen for the third consecutive week. At the end of next week, the monthly employment report is due, and the early call is for around another 900k increase in .

Canada and Mexico’s economic calendars are light today. Tomorrow Canada reports February and Mexico reports Q1 . The extended yesterday’s drop and fell a little below CAD1.2290 but spent the European morning straddling CAD1.2300. The 2018 low was set near CAD1.2250, and that may be the next technical target. The 2017 low closer to CAD1.2060.

The dollar had moved above its 20-day moving average (~MXN20.05) against the Mexican yesterday for the first time since late March, but the dovish Fed saw the greenback tumble to around MXN19.86. It was consolidating today in the lower part of yesterday’s range. Here too, the direction of US rates seems key.