GameStop (GME) is the leader of the pack of meme stocks, propelling WallStreetBets to fame during the coordinated short squeeze in January. The rally in GameStop and the disruptions it caused among brokerage platforms and the overall market was even a focus of congressional testimonies. While the beltway scrutiny may have faded — for now — the stock continues to trade above $150 per share as of late April, compared to $20 per share at the start of the year. The share price has continued to see high levels of volatility. 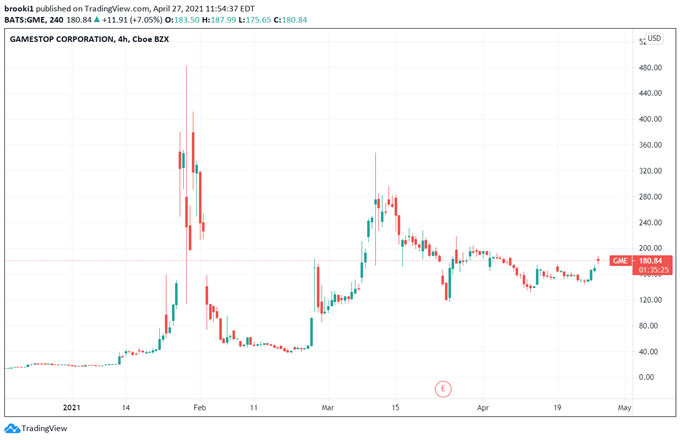 Meanwhile, the attention around GME helped spur a management shakeup management. CEO George Sherman is stepping down this summer and GameStop’s board is seeking a replacement, according to an April company statement. E-Commerce guru Ryan Cohen became an activist shareholder in late 2020. Now on the board, he appears to be fast-tracking his way to chairman and to a digital transformation of the company, likely borrowing lessons from Chewy, the pet food company he cofounded. GameStop’s earnings quarter concludes at the end of April, its Q1 earnings are expected in early June.

Redditor Keith Gill, a CFA that led the charge on the GME short squeeze, continues the quest to realize the value behind GameStop, and with Cohen at the helm it seems that there’s some legitimate excitement for what may be in store for the company’s future. What started as a ‘Blockbuster 2.0’ story that hedge funds were picking off has now turned into a possible turn-around led by a successful executive with a history of success.

While many dismissed the initial run in the stock to a short squeeze scenario, GME has actually held up fairly well after the fireworks. The stock hasn’t traded below $100 since early-March and, at this point, there’s actually a case to be made for higher-low support over the past couple of months.