The USD/BRL continues to trade in an oddly correlated trend compared to other major Forex pairs with a seemingly delayed reaction.

The USD/BRL will open trading today near the 5.2500 ratio, if there is no major gap produced when trading begins. Having achieved a high of nearly 5.4800 on the 20th of August, the USD/BRL then produced a rather worthwhile bearish reversal which saw a low of nearly 5.1100 on the 31st of August. Early September trading saw the Forex pair traverse a relatively calm consolidated range between 5.1200 and 5.2000.

However, on the 8th of September, a bullish spike saw a high of about 5.3300 achieved quickly. Since the 9th of September, some selling has taken place which took the USD/BRL back into its early September range, but at the end of last week a move higher was achieved again. While technical trading is certainly a focus and support and resistance levels have proven rather durable, the USD/BRL is likely also being affected by some nervousness in global markets and political unease in Brazil. Yet resistance above 5.3000 looks rather strong momentarily.

The USD/BRL remains rather stable, yes there is the occasional burst of volatility that all forex pairs endure, but the Brazilian real has produced a rather steady range and remains an opportunity for speculators enticed by its ability to test support and resistance marks consistently. Traders of the USD/BRL are encouraged not to be impatient and if they can withstand overnight carrying charges which their brokers might charge, the capability of wagering on the pair remains attractive for speculators who can keep their positions open.

The recent ability to create some bearish momentum after producing a high on the 20th of August is intriguing. On the 24th of June the USD/BRL was trading near the 4.9000 ratio, before reaching its apex of 5.4800 near the end of the third week in August. The trend in the USD/BRL doesn’t always correlate with the global Forex market, but it frequently shows an ability to technically correct and prove that it has a compatible relationship for patient traders.

See also  Another Move Upward and Test of Critical Resistance

If current resistance levels near the 5.27000 to 5.3000 prove durable short term, speculators may want to wager on selling positions within the USD/BRL. Traders can use relatively tight stop losses while looking for downside momentum, but they should also make sure they keep their take profit targets realistic and do not become overly ambitious. 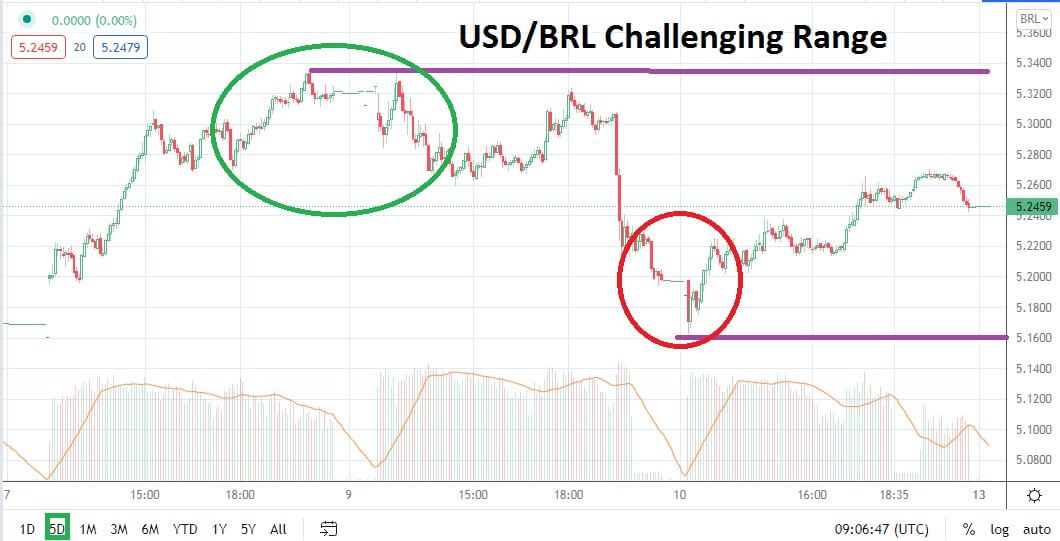