Cardano has faced strong headwinds the past handful of days as ADA/USD is hovering near important mid-term support ratios.

The nervous broad cryptocurrency market has begun to produce evidence within ADA/USD that speculators may be cashing out some of their profitable positions, which have been attained since late July. Having hit an apex of nearly 3.100000 on the 2nd of September and outperforming its major counterparts, ADA/USD has begun to experience headwinds and seen an erosion of value. As of this writing, Cardano is near 2.380000.

The current price of ADA/USD is intriguing because it is approaching a price band which doesn’t have a lot of bona fide action below since the middle of August. If the 2.300000 to 2.200000 support levels begin to have a sustained test of these values, the next price band which is below and saw plenty of trading from the 11th until the 20th of August are values ranging from 1.650000 to 2.250000. Traders should look at those numbers and understand the percentage of change in prices which ADA/USD can produce in quick strikes.

Cardano remains one of the most volatile cryptocurrencies and its ability to produce all-time highs almost ten days ago remains tantalizing. However, while outperforming nearly all of its major counterparts, ADA/USD has now begun to see its value decline and correlate with the broad cryptocurrency market which has not only consolidated, but experienced an incremental decrease in values technically in a consistent manner.

If current support levels falter, ADA/USD may produce additional fast results. A change in value of nearly 30% over the duration of one week of trading may be attractive for speculators, but it should also serve as a large warning sign that this asset needs to be treated with caution. While support levels do look vulnerable as nervous market sentiment seemingly percolates, resistance levels above could attract traders who remain optimistic and believe a reversal higher is overdue.

If the 2.44000 to 2.500000 levels above begin to be tested and broken higher, ADA/USD could produce a sudden run towards the 2.600000 mark in the blink of an eye. Technically, ADA/USD is traversing near important support levels, however, and if these junctures continue to be pressed upon speculators may want to wager on selling positions on slight reversals higher. If ADA/USD doesn’t produce a run upwards and break through current short-term resistance levels near the 2.410000 ratio, traders cannot be faulted for thinking more downside action will be produced near term.

See also  Bitcoin falls to the lows of the day 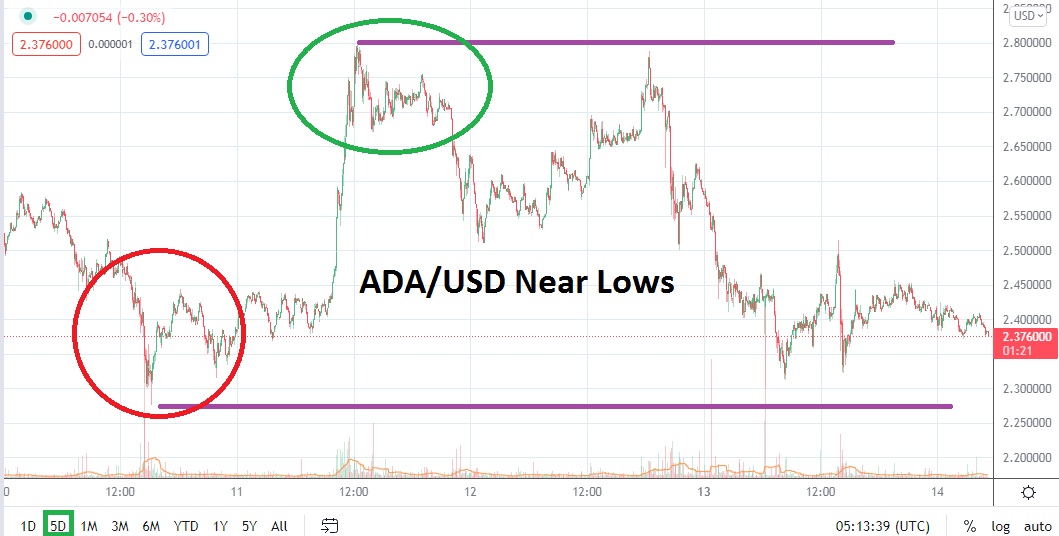