The trading day is coming to an end with stocks moving sharply higher. That dynamic has the flow of funds into the “risk on” currencies including the NZD, CAD and AUD. Those three currencies are the strongest of the majors.

The biggest loser is the JPY followed by the USD as traders exit those currencies (they tend to lose the relative safety bid).  US yields are also lower on the day leading to the US dollars decline. 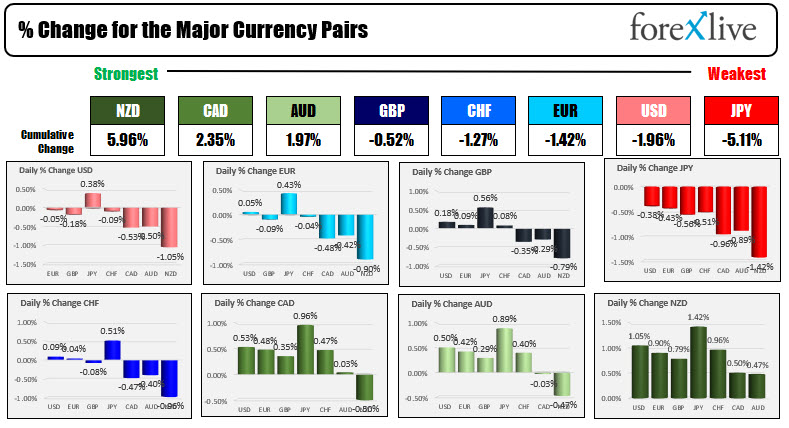 So how has the moves changed, or reinforced, the technical picture for some of the major currency pairs.

The EURUSD is trading near unchanged  on the day going into the close after a run higher in the European session, gave way to more selling in the US session.  Nevertheless, the move to the downside did hold support near recent swing highs from last Friday, and Monday between 1.1583 and 1.1586. Recall that yesterday the price moved above that ceiling. In the Asian session today, the area was tested and the price moved higher. The 2nd test (after the run higher) in the US session helps to increase the levels importance going into the new trading day.
See also  Bank NIFTY ASTRO TECHNICAL ANALYSIS

The USDJPY held support against a trendline on the hourly chart and the rising 100 hour MA (at 113.29 and 113.253 respectively).   That keeps the buyers more in control.

Having said that the high today stalled ahead of the double top from Tuesday and Wednesday at 113.798 .  In the new day if the buyers are to keep the momentum going in the upward direction, getting and staying above 113.798 is the first step.

The GBPUSD moved higher in the European session and in the process moved up to test an old floor going back to August and September.  That floor became a ceiling from September and that ceiling was retested today and held in the 1.3725 to 1.3733 area. The subsequent move back to the downside in the US session saw the price hold support against the Monday swing high at 1.36738.

Going into the new day, the support at 1.36738 and the resistance at 1.3733 remain the levels of importance. Move below the support increases the bearish bias. Stay above and the buyers remain in play. Move above the high extreme and the buyers add to their bullish bias.

The current price is trading near the lower level at 1.3684.

The AUDUSD moved higher today, and in the process has moved above its 100 day moving average at 0.74133. The current price is trading at 0.74164 just above that level after trading above and below it during the US trading session.

The moving average level will be the barometer for the bias in the new trading day.  Should the price start to see more momentum buying with a move above the high reached on Thursday at 0.74259, look for additional upside momentum with 0.74676 (the September 7 high) and 0.7477 (the September 3 high) as the next upside targets.

Move below the MA, and a rotation back toward the Wednesday high price at 0.7384 would be a downside target.