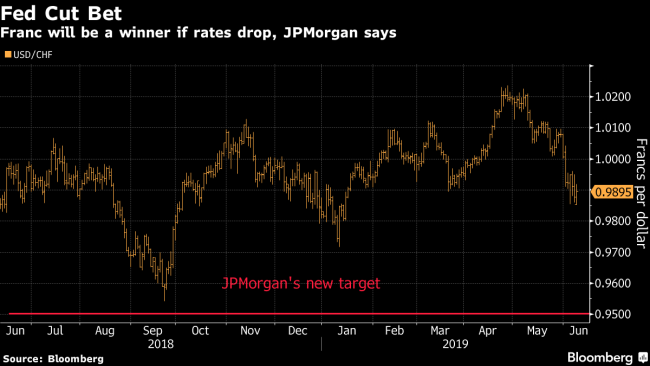 (Bloomberg) — Swiss franc bulls have history on their side as speculation grows that the Federal Reserve is about to cut rates.

The franc was the best-performing currency during the past four rate-cutting cycles, according to JPMorgan Chase & Co (NYSE:). It’s already rallying as Treasury yields plummet, evidence the pattern might repeat. JPMorgan believes it will, leading the bank to upgrade its franc forecast on Monday.

“A downturn in the global economy and risk markets would have the potential to drive sharp and accelerated gains in CHF,” Paul Meggyesi, currency strategist at JPMorgan, said in a report.

He now sees the strengthening to 0.95 against the dollar, the strongest since March of last year, versus the previous target of 0.98, reflecting the likelihood of Fed easing. The rates market is pricing in about 78 basis points of cuts over the next 12 months, according to forward contracts.

With recession risks rising amid trade tensions between the U.S., China and other global partners, investors have rushed to haven currencies. In the past month, the franc has advanced more than 2% versus the greenback, topping all other peers in the Group-of-10. The Swiss currency was little changed at 0.9900 per dollar as of 8:06 a.m. London time Tuesday.

Switzerland’s current account surplus, which amounts to 10% of gross domestic product, or three times as much as Japan, makes the franc a stronger refuge, JPMorgan said. The yen is the franc’s preeminent rival for safe-haven status among currencies, according to the report.

The yen is also expected to lure buyers seeking safety from trade wars. But it’s been topped by the franc’s average performance in the 12 months following the first cut in major Fed easing cycles of 1981, 1989, 2001 and 2007, according to JPMorgan. The franc is also one of the top three performers around the last five U.S. recessions, the bank said.

To be sure, the Swiss National Bank could consider slowing the franc’s appreciation. But JPMorgan points out that the SNB did not intervene in any material size during the Italian crisis last year.

“The currency is rather less constrained by the SNB than it has been for much of the past decade,” Meggyesi wrote. “Entering the next recession with reserves at 120% likely means that the SNB will need to be more accepting of fundamental pressure for CHF appreciation than it was entering the financial crash when FX reserves were less than 15% of GDP.”

He added: “The SNB’s magazine may not be entirely empty, but it has far fewer bullets than it once did.”