Dogecoin has skidded towards important mid-term support and traders will need to decide upon their short term perspectives.

DOGE/USD slid towards important mid-term support yesterday with a quick dose of downward momentum. After essentially breaking the 30 cents barrier lower yesterday, DOGE/USD rather quickly saw the 26 cents juncture come into play. As of this writing Dogecoin is around 25 and half cents and fast market conditions remain, which means speculators should be ready for additional volatility today. The heightened velocity within DOGE/USD should serve as a warning sign for traders, and risk taking tactics need to be used.

The 25 cents ratio may prove to be rather important if it is challenged short term. DOGE/USD is currently next to support levels last seen on the 12th of August, and further erosion towards a ‘pure’ 25 cents mark could indicate the 24 cents level and perhaps lower could come into view rather abruptly. On the 9th of August DOGE/USD was traversing the 23 to 26 cents ratios. It should be noted as late as the 5th of August; DOGE/USD was trading slightly below 20 cents.

As DOGE/USD tests one month lows, some speculators may believe the cryptocurrency has been oversold as a reaction to nervousness displayed within the broad digital marketplace. However, it should be noted the spike downwards in Dogecoin actually started slightly before its major counterparts were hit hard. While the five day chart shows a dramatic gap in the market, selling between 30 and 26 cents yesterday was evident early yesterday.

Trading volumes were relatively high as DOGE/USD moved lower yesterday. What should make speculative bulls hesitate before jumping in with buying positions is that a reversal higher has not occurred in any dramatic way, and there is the fact that Dogecoin didn’t ever challenge its exuberant highs seen only a handful of months ago, this as other major cryptocurrencies have come within shouting distance of those highs the past couple of weeks on occasion.

As always DOGE/USD remains extremely speculative. This headwind that emerged yesterday cannot be shrugged off easily, and more selling pressure could be demonstrated within the cryptocurrency. Speculators who are tempted to sell DOGE/USD should use appropriate stop losses to protect against sudden reversals higher. However, shorting DOGE/USD appears to be a logical speculative position near term for traders who have the emotional strength to wager on more downward price action. 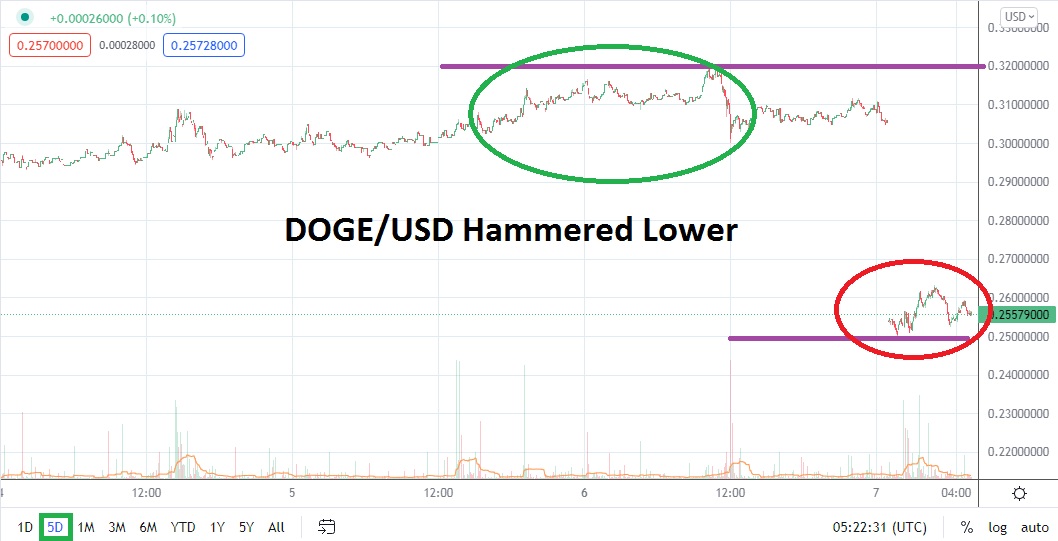