USD/CAD continues to show weakness within an intermediate-term channel structure below long-term support, which suggests that lower levels lie ahead. For some background, the pair broke below the 2009 high, which became influential at times over the past few years.

The last hold of the 13000-line was back in September, where a rally only resulted in a corrective bounce within the downtrend off the March spike-high. The minor test in November lasted only briefly before USD/CAD finally lost the long-term threshold last month. It was briefly tested just prior to Christmas, but confirmed as a former level of support now turned resistance.

This kept the channel structure since early November developing as well. With the channel in play and the absence of any strong buying efforts, the bias at this time is towards seeing lower levels. The bottom of the channel could offer minor support in the mid-12400s, but isn’t viewed as meaningful given the overall trend.

To negate this bearish outlook, some work is needed. First, the intermediate-term channel will need to be snapped by price crossing above the upper parallel, but then that will ultimately need to be followed by a firm recapturing of the 13000-line.

Check out the Q1 USD Forecast 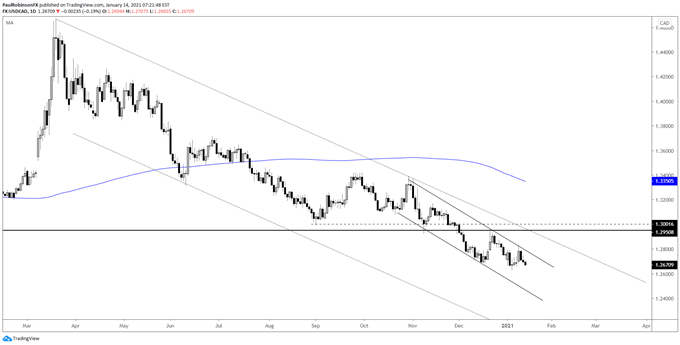