The growth vs value trade continues to be a major theme in stocks, with the latter currently leading the way. The Nasdaq 100 is way out in front heading for new record highs seemingly every day while the Dow looks sluggish.

As tech stocks keep powering along at some point a rotation may sneak up on the market, where the NDX starts to sag and the value filled Dow pushes ahead. First, looking at the technical picture for the Nasdaq 100 high prices might be the only thing that ends up stopping it from reaching higher prices. The market will simply run out of gas.

Fighting it from the short side doesn’t look like a good proposition as the rally can continue unabated for longer than you can stay with your position. The warning of a potential pullback is more for longs interested in holding onto the majority of gains from positions established at lower levels. Implanting a trailing stop strategy at this juncture may be a prudent move. 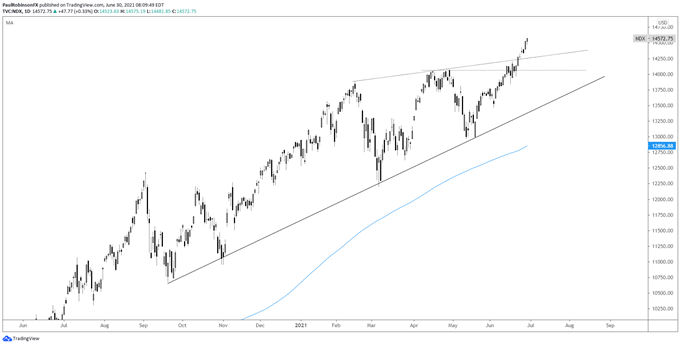 As for the Dow, while it is lagging behind and even carving out a small series of lower lows and lower highs, it doesn’t appear overly bearish. To the contrary, the sequence could be construed as a loose bull-flag. If price can rise above the trend-line declining of the high, then we may see the beginning of a rotation into old-school names and a rally to new highs in the Dow. This could lead to flat to down period of trading for the NDX. 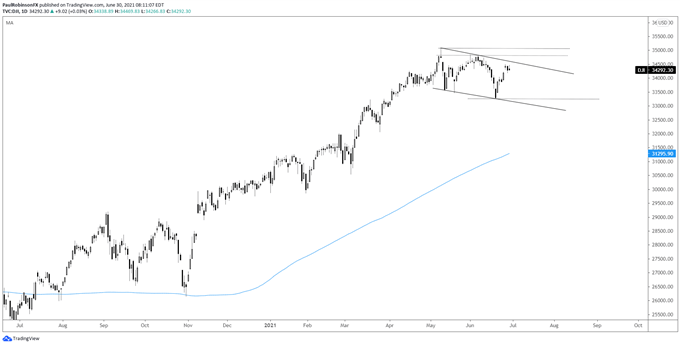 The S&P 500 is caught somewhere in the middle, but leaning more towards the way of the Nasdaq 100. It has climbed into record territory again, but momentum isn’t particularly strong. However, slow grinds higher are a fairly common occurrence in record territory and can go on for some time. Even as such, risk is becoming skewed towards a pullback. The November trend-line could be a line of support to watch. 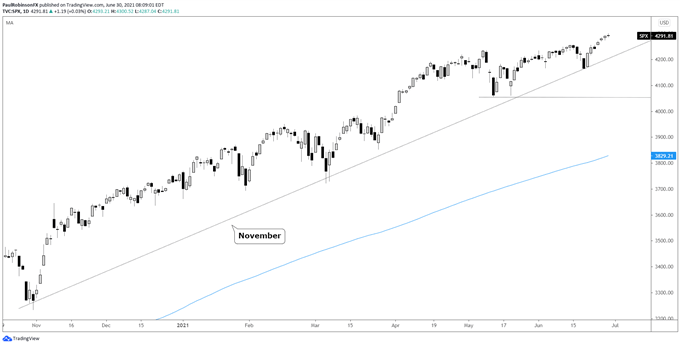