ADA/USD was able to reach a solid, short-term high on the 3rd of June, but has incrementally decreased in value since then and is approaching key support.

ADA/USD continues to deliver rather worthwhile trading ranges for speculators who like its volatility and have the emotional fortitude to wager. After reaching a high of nearly 1.890000 on the 3rd of June, ADA/USD has stumbled. As of this writing, ADA/USD is traversing the 1.700000 mark. Just two days ago, Cardano was trading only slightly above the 1.600000 mark, and then climbed to a high of nearly 1.750000 late last night before selling developed again.

Part of ADA/USD’s allure is that it creates rather tactical-looking technical trends. However, as ADA/USD trades near its current values, traders may be perplexed about choosing a direction. Short-term resistance near the 1.749000 could prove to be an important indicator; if this value is penetrated higher, ADA/USD could quickly try to test the 1.780000 to 1.800000 junctures.

The broad cryptocurrency market remains rather skittish and trading results from the past month have left many traders bruised. Speculators may be wise to allow momentum to build within the digital currency marketplace and then try to take advantage of trends. However, if a trader wants to dip their toes into the waters now, they should watch the current price ratio of ADA/USD and see if the 1.700000 mark can be sustained.

There is reason to suspect that if ADA/USD cannot maintain its price above the 1.700000 level today, this could be a bearish signal and lower support ratios will be tested. If the 1.680000 mark fails to hold ground, a test of the 1.640000 area could quickly be demonstrated. The 1.600000 juncture has proven to be rather solid support since the 1st of June. If this value were to be penetrated lower, it would certainly signal additional nervousness has grown.

ADA/USD is perched on a very speculative value as it idles near 1.700000. Traders who still believe that bullish behavior will erupt and a move higher will be exhibited can be buyers of ADA/USD and use nearby support as stop-loss orders rather effectively. Traders who believe the downside will raise its head again soon may want to wait for a slight move higher and sell ADA/USD with limit orders near the 1.710000 to 1.720000 junctures. 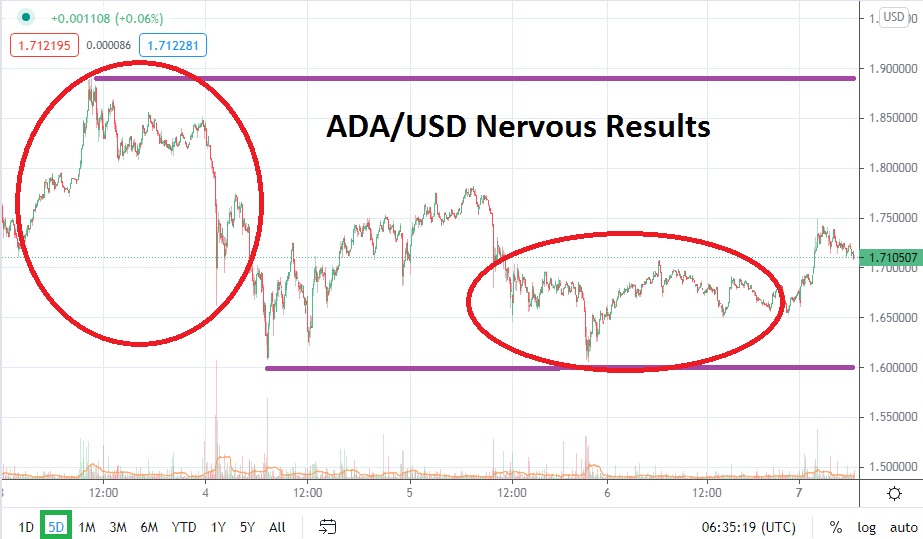