The USD/INR is below the 75.0000 level in early trading today, after not being able to sustain its higher price range yesterday and seeing some selling develop.

The rupee has been extremely popular lately – don’t miss these interesting opportunities!

While the USD/INR remains within the upper range of its value, the past handful of hours has seen the Forex pair develop selling. In perhaps an important move, the USD/INR has fallen through 75.0000 and this level is now acting as short-term resistance. If the USD/INR can sustain its value below the juncture it could indicate that additional short-term selling could gain momentum.

A high of nearly 75.4100 was attained early yesterday, but the value was not able to surpass this level which challenged a high from the 14th of October. Intriguingly, after starting yesterday’s trading slightly above the 75.0000 mark after going into the weekend with a selloff, the reaction in the USD/INR was a rebound higher which created Monday’s high. However, the pair soon began to run out of power and began to incrementally selloff.

The USD/INR has been within the thrall of a strong bullish trend since the end of August. Highs made on the 12th of October challenged marks seen in April, but interestingly the USD/INR has begun to stumble slightly lower since climbing to these values of nearly 75.6800. Incrementally the USD/INR is moving downwards and it may be repeating the same type of movement that occurred in April after the highs were made too.

At the end of May of this year, the USD/INR was trading near 72.3800. This is not to say the pair is about to stumble to these lows, but is illustrates the variance in price potential. Current support for the USD/INR appears to be the 74.9000 ratio, and if this is broken lower some traders may begin to aim for 74.8600 and marks lower. The USD/INR is capable of producing fast movement, but speculators need to understand the Forex pair also remains near important highs.

If current support levels hold and the USD/INR challenges the 75.0000 level short term, then traders need to pay careful attention. The 75.0000 mark appears to be important psychological territory and will be a good indication regarding behavioral sentiment for technical traders. A move above this level could indicate additional movement upwards can develop and the 75.0800 mark can be targeted. A move below the 74.9000 level could produce targeted short-term speculative selling for the 74.8600 ratio. 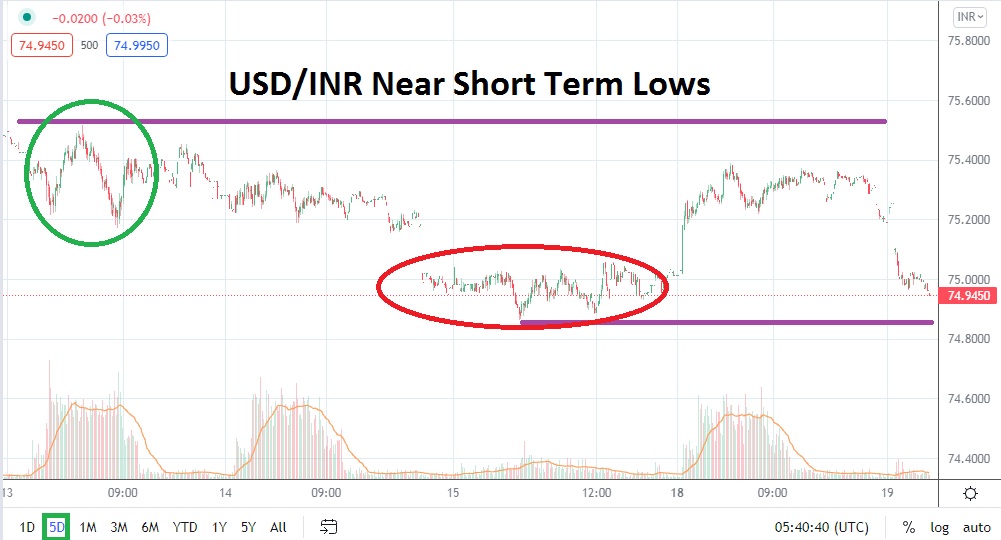