The USD/MXN is traversing within a fairly consolidated range early today; this has taken place after the Forex pair re-confirmed its bearish momentum late last week.

The USD/MXN is again within its lower value depths as it tests waters which have periodically been traversed the past seven months. The 19.80000 juncture continues to act as a key inflection zone for the USD/MXN. Since late November of 2020, this juncture has proven to be a magnet for bearish activity, but it has also produced definite reversals higher.

As of this writing, the USD/MXN is trading near the 19.84000 level. The Forex pair began trading yesterday near the 19.96000 juncture and proved capable of staying below the important psychological level of 20.00000.

The ability to sustain its price below the 20.00000 juncture and incrementally move lower yesterday should be viewed carefully by technical traders. A low of around 19.74000 was touched on Monday before the USD/MXN then moved slightly higher. This reversal higher upon touching the 19.74000 support juncture is something that has happened on a steady basis when the value has been challenged.

Traders may be becoming skeptical regarding the ability of the USD/MXN to penetrate and effectively sustain values below the 19.80000 juncture. Until the Forex pair is able to prove that this support level is vulnerable and see the USD/MXN trade below this mark for a substantial duration, traders should not aim for targets which are too far below. Traders may believe the USD/MXN bearish trend remains intact, but the price action since the middle of April has consistently produced a range between the 19.80000 to 20.21000 ratios with the occasional outlier being seen.

Speculators cannot be blamed for thinking that if and when the 19.75000 to 19.70000 junctures are punctured lower, a sea of volatility could ensue. Because of this notion, traders should be vigilant regarding their use of stop-loss and take-profit tactics and try not to be too greedy because of the tendency for reversals to occur.

Conservative traders who continue to be attracted to the bearish momentum within the USD/MXN should be patient and wait for slight reversals higher and then activate their selling positions with limit orders. If the USD/MXN continues to display ability to sustain its current price action below the 19.86000 to 19.88000 resistance levels, this could be an indicator that further bearish momentum may be displayed in the short term. Traders of the USD/MXN should look for quick-hitting trades from the Forex pair. 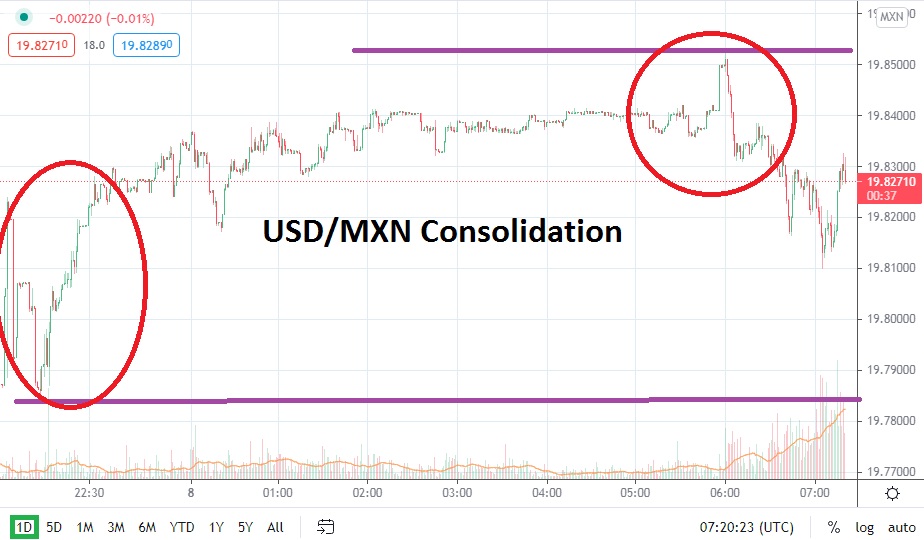