The USD/INR has reversed higher, and yesterday’s move upwards may signal additional momentum may be contemplated by short term traders.

The rupee has been extremely popular lately – don’t miss these interesting opportunities!

After trading near a low of 73.0000 as the week began, the USD/INR has produced solid bullish price action as it has brushed aside short term resistance levels. The ability of the USD/INR to move higher upon the return to action by U.S based financial institutions may indicate the sudden gyrations upward are not a momentary dash in the sun. The USD/INR has certainly produced a volatile price range the past month of trading, but the forex pair remains within the lower realms of its one month chart. However, the price action the past two days should serve as a healthy reminder to traders that risk management is always needed.

The current price of the USD/INR is hovering near the 73.5600 mark and this is a hair below important resistance demonstrated in late August. If the USD/INR can maintain its current resistance levels near the 73.6600 to 73.7000 junctures this might prove to be a sign that the short term bullish trend may be about to run out of power. However, if the 73.7000 mark is penetrated higher and prices sustain above this level a test of 73.8000 is entirely possible.

Important support for the USD/INR is near the 73.4800 level and if this begins to be challenged this would indicate the forex pair may be able to actually produce a solid mover lower. The USD/INR can be fast and produce price action which tests the emotions of all speculators. The price velocity within the forex pair was fast yesterday and traders will likely be hoping for slightly calmer waters.

Yesterday’s trading can be viewed as a reaction to increased volumes. Perhaps after Tuesday’s trading upon the return of American financial institutions, near term trading may stabilize and the USD/INR will be able to find equilibrium. Traders’ who have been pursuing downside price action and have been hurt the past couple of days, may look at the USD/INR and believe it is overbought.

Conservative traders should monitor current resistance levels. If the 73.6000 juncture proves to be strong and trading isn’t demonstrated above this mark for a sustained amount of time, speculators who have been pursuing bearish momentum may feel that now is the time to wager again on downside price action. Traders are urged to use stop losses and not become overly ambitious in the short term.

See also  The USD is looking strong and force the pair above 1.2600 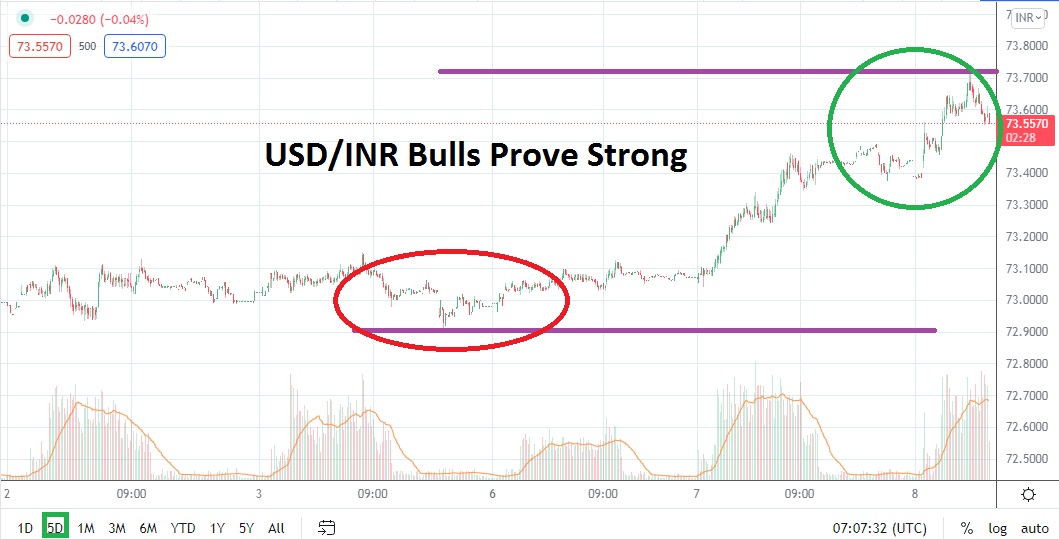