The Asia-Pacific session is off to a cautious start on Friday after Wall Street saw broad losses across its major equity indexes. The risk-sensitive Australian Dollar fell near a full percentage point against the safe-haven US Dollar. Still, the broad-based US Dollar DXY index moved lower, driven by some strength in the Euro.

The Treasury curve steepened as short-term maturity yields outpaced the fall against longer-term yields. The 5-year and 30-year yields dropped 4.50% and 0.24% at the New York closing bell, respectively. Bond traders are soaking up government debt as perceived headwinds mount for continued economic growth. The quickly spreading Delta Covid variant is a prime concern for government policy makers at the moment.

While the Delta variant has spread rapidly in recent weeks – becoming the dominant US strain earlier this week, according to the Centers for Disease Control (C.D.C)— world leaders haven’t enacted sweeping lockdowns like those seen in 2020. Nonetheless, the growing threat is fogging the outlook on the economic recovery, which has translated to some easing in hawkish bets for major central banks.

In fact, the Reserve Bank of Australia’s Governor, Philip Lowe, in a speech Thursday reiterated the view from the latest monetary policy statement. That is, the RBA does not see rates rising until 2024. Inflation rising to the target range of 2 to 3% is also unlikely in the same period. The RBA Chief also noted that offshore hiring has harmed wage gains.

Friday’s session will see China report inflation figures for June. According to the DailyFX Economic Calendar, the year-over-year number is expected to cross the wires at 1.3%, matching the prior month’s gain. The economic powerhouse will also report producer prices, with analysts forecasting an 8.8% increase for June, down slightly from 9% in May.

The sharp rise in commodity prices has helped fuel higher costs that companies pay to produce goods, although most of those have not been passed down to consumers just yet. The Yuan has weakened against the Greenback in recent months, following the currency pair hitting a multi-year low in May. Today’s inflation and PPI figures will likely help shed light on the PBOC’s outlook regarding monetary policy.

The Australian Dollar dropped 0.74% against the US Dollar overnight, extending AUD/USD’s losing streak into its fourth consecutive session. The September swing high appears to underpin an intraday move lower, although price will soon test that level again if weakness continues. The MACD oscillator remains pointed lower, indicating a bearish bias. 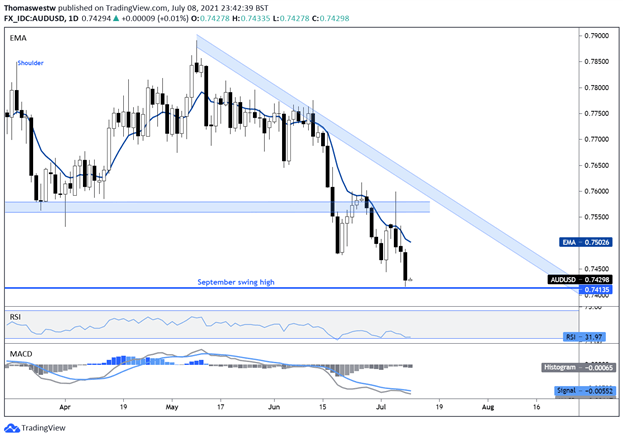