The USD/TRY remains a battle of wills and a game of “who do you trust?” via speculative endeavors as a short-term trend higher has emerged.

The USD/TRY is testing short-term resistance as its price this morning is near the 8.44000 mark. A low of nearly 8.25000 was attained in early September, which tested support levels not traded sincerely since the second week of May. A slight reversal higher has ensued since the early September lows and speculators may be growing agitated as they wonder where the next round of strong direction will take hold.

While the USD/TRY does correlate to the global Forex market on occasion, it also has a definite mind of its own due to the rather adventure-laden shadows which hover over its trading landscape due to the rather turbulent banking sector in Turkey. Economically, Turkey remains an important nation and its industry base is strong, but due to a central bank which cannot be described as independent, the Turkish lira has a rather fragile sentiment always surrounding it and this causes gyrations for the USD/TRY.

Current support levels near the 8.40000 juncture should be watched carefully. If this price level remains adequate in the short term it could spur on additional speculative buying which may look at resistance marks near the 8.45000 to 8.48000 as alluring. The USD/TRY can turn volatile quickly and traders always need to make sure they have stop loss and take profit positions working to protect their trading accounts.

A high of nearly 8.52000 was seen late last week, but this may have been produced due to the rather nervous sentiment lingering on global equity indices. If market conditions stabilize this may cause speculative bears to believe there is enough reason to pursue technical support levels which were seen a short time ago. If the 8.40000 can be penetrated lower, sellers may target the 8.38000 to 8.36000 ratios.

The USD/TRY is volatile and its ability to sudden develop a mind of its own must be taken into consideration. However, short-term traders who are looking for quick-hitting trades taking advantage of reversals have plenty of reasons to love the opportunity the Turkish lira provides. Speculators should not become overly greedy with the USD/TRY and keep their targets realistic as they pursue their chosen direction. 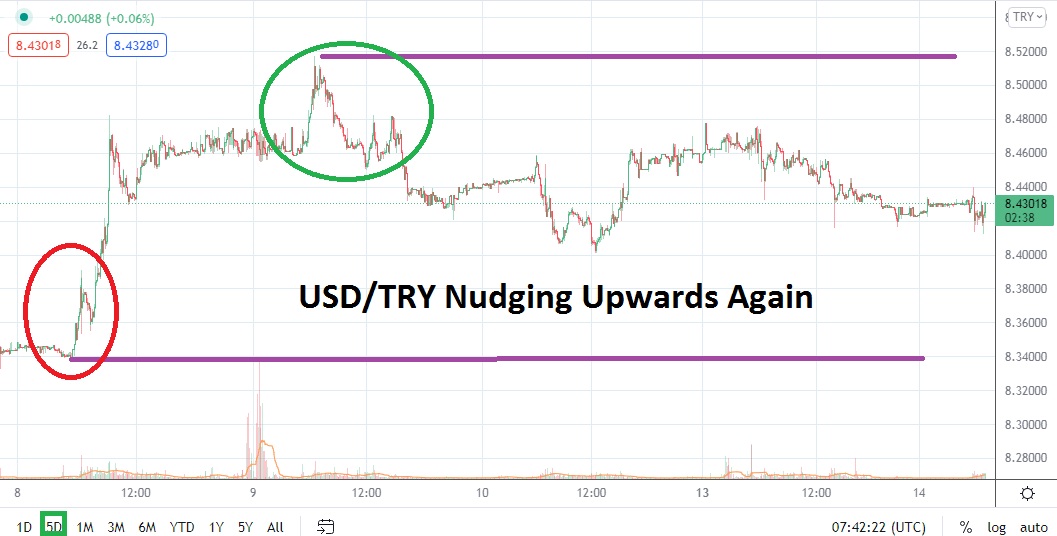