BTC/USD has managed to create a powerful upwards climb that is brushing aside resistance levels with bold upward strokes in value.

BTC/USD is trading near the 54800.00 mark as of this writing. Bitcoin is not only moving fast, but it is taking no prisoners, particularly if traders have been trying to bet against the upwards momentum of BTC/USD. On the 29th of September, Bitcoin was trading near the 40800.00 level as it put in a solemn test of early August values briefly. What has ensued since testing these lows has been an astonishing bullish movement. In the past week of trading, BTC/USD has gained nearly 15000.00 USD per coin.

It goes without saying that BTC/USD is volatile and traders looking to take advantage of the rapid movement within the cryptocurrency need to practice a substantial amount of risk management. Technically, the current levels being traded are traversing values last seen in the second week of May. A high of nearly 64850.00 was attained on the 14th of April. While it felt like it would have been outright ‘lunatic talk’ to predict record highs would be attained in October while BTC/USD was testing September lows, the conversation has suddenly taken on a serious tone.

The trend has been bullish and exceptionally strong the past week. Trying to step in front of the upwards trajectory could prove to be costly and fatal for trading accounts if proper risk-taking tactics are not used wisely. Stop loss requirements and conservative amounts of leverage are urged. Current resistance for BTC/USD may be the 55000.00 level. Traders who want to sell BTC/USD and look for downwards movement need to be very careful.

Yes, the stated juncture of 55000.00 is a distance away from the actual price for the moment, but the speed of BTC/USD needs to be taken into consideration. Traders looking to buy BTC/USD for quick hitting endeavors need to use defined take profit ratios. If they do not feel like waiting for ‘further’ resistance levels to be targeted this is quite logical, but traders need to make sure they get ‘filled’ properly within Bitcoin in order to pursue their goals in an astute manner.

If the 55000.00 mark crumbles short term and prices are sustained above, next targets could be the 55600.00 values which were tested yesterday. Speculators need to take into consideration the speed in which BTC/USD is moving. Reversals can be violent within Bitcoin and trading the cryptocurrency should not be done by traders with weak stomachs. Short-term indicators are bullish and speculators may want to wager on the movement within Bitcoin if they can manage the risks properly. 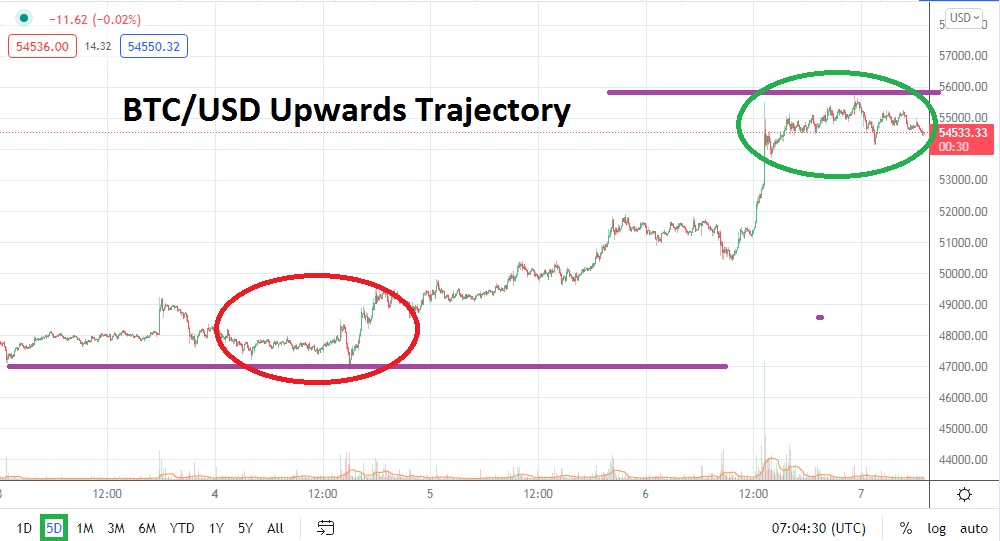