DOT/USD continues to be a speculative magnet in the cryptocurrency world and in very early trading yesterday an all-time high of nearly 38.0000 was achieved.

While many of its major counterparts are experiencing nervous trading conditions, DOT/USD has continued to mount an impressive bullish trend. In early trading yesterday, Polkadot reached an apex of nearly 38.0000, which was an all-time high. Headwinds have created rather consolidated results and even declines among many of the major digital assets the past two weeks, but DOT/USD has not correlated to price action and remains within eyesight of its record values.

As of this morning, DOT/USD is trading near the 36.2000 level and traders who decide to participate with Polkadot must be prepared for swift conditions. After touching all-time highs, DOT/USD did produce selling action and late yesterday a low water mark of nearly 31.6500 was seen. However, since touching this juncture which touched prices last seen on the 12th of September, DOT/USD has moved higher again with fast trading dominating action.

Intriguingly, as DOT/USD has displayed ability to climb since the 8th of September when the cryptocurrency was trading near the 25.2000 ratio briefly, other cryptocurrencies have largely been pushed backwards. On the 20th of July, while the 10.0000 value was being tested as support, few traders would have likely predicted a tripling of value. The bullish trend which Polkadot has enjoyed was certainly demonstrated in the broad market for an enjoyable stretch of time, but its ability to maintain the upwards trajectory when its counterparts have begun to struggle is noteworthy.

If current support levels near the 35.7500 to 35.5000 marks are able to be sustained, speculators may believe another leg upwards within DOT/USD has potential. Speculators may find it difficult to believe DOT/USD will continue to outperform the majority of the cryptocurrency market, but wagering against the trend may prove to be equally hard.

See also  Another Move Upward and Test of Critical Resistance

Support levels which were seen yesterday below near the 32.0000 to 31.5000 marks should be kept an eye on. If for some reason swift selling were to suddenly test these levels again this would be an indicator bearish sentiment has not only become strong, but could challenge the 30.0000 which was seen as late as the 11th of September.

Volatility in DOT/USD remains extreme, and traders are urged to use stop loss, take profit and entry orders to open positions. Polkadot has gained many speculators in the past couple of weeks because of its price action and if volumes remain high, further volatility will certainly be displayed. While the broad cryptocurrency market displays nervous sentiment, technically DOT/USD has been the outlier providing a steady climb. Wagering on additional upside action if support levels prove durable is tempting, but speculators need to practice their risk-taking tactics wisely. 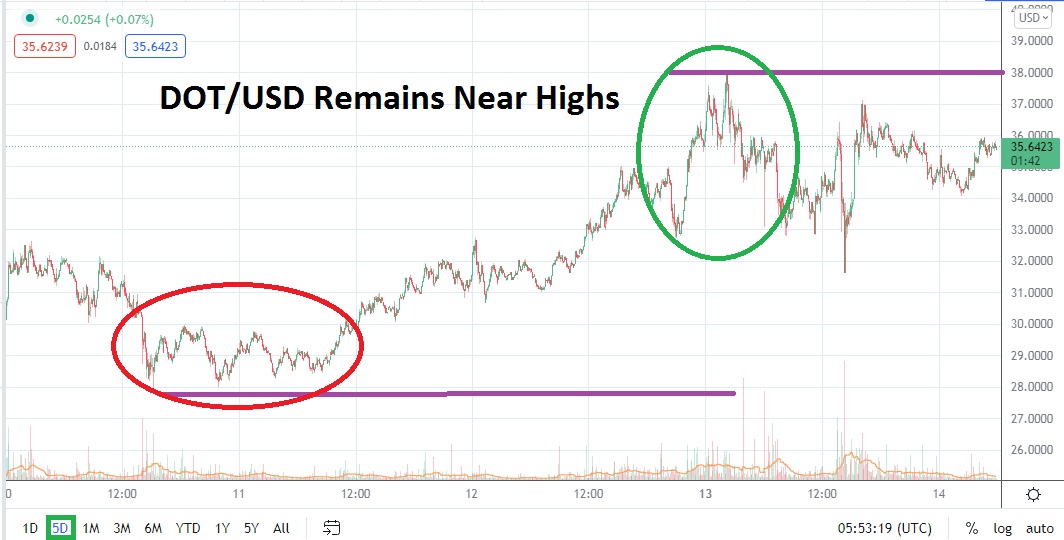