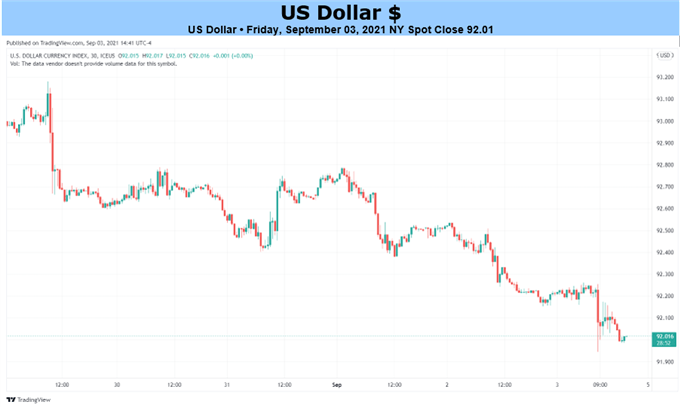 The US Dollar weakened after Friday’s non-farm payrolls report largely missed expectations. This sent my majors-based USD index to its lowest since July levels on the chart below, leaving behind 2 weeks of disappointing price action. The nation added just 235k jobs versus 733k anticipated as the unemployment rate declined to 5.2% from 5.4% – as anticipated. Average hourly earnings did surprise higher though at 4.3% y/y.

With that in mind, this report likely cooled expectations that the Fed could begin tapering monetary policy this month. This follows dovish commentary from Chair Jerome Powell on the labor market. Moreover, further soft employment readings could delay eventual rate hikes in the long run. This is perhaps why the longer-term 10-year Treasury yield gained in the aftermath of the jobs report.

With non-farm payrolls data now behind us, the focus for the Greenback arguably turns to external economic event risk. That is because the domestic calendar is fairly light and quiet. Dallas Fed President Robert Kaplan will be speaking later this week. Traders will likely be tuning in to see what he has to say about the labor market and what that could mean for policy going forward.

In the coming week, the Reserve Bank of Australia (RBA), European Central Bank (ECB) and Bank of Canada (BoC) will be releasing their latest monetary policy announcements. Recent economic developments out of Australia, the Euro-area and Canada may increasingly set divergent paths for how their central banks could take the post-Covid QE unwinding approach.

Starting in Australia, expectations are rising that the nation will see GDP contract in Q3 after strict lockdowns across the country. That has brought forward bets that the RBA may reverse its decision to taper weekly asset purchases later this year. Having said that, the central bank surprised some investors last month when it still stuck to its original plan. The situation remains fluid and ripe for AUD/USD volatility.

In Canada, an unexpected GDP contraction in the second quarter cooled sooner-than-anticipated policy tapering bets. The central bank has already partially reduced asset purchases. A relatively dovish approach could weaken the Canadian Dollar to the benefit of the US Dollar. With that in mind, the Greenback will likely focus more on external knock-on impact risks, creating an uncertain outlook for the week ahead.