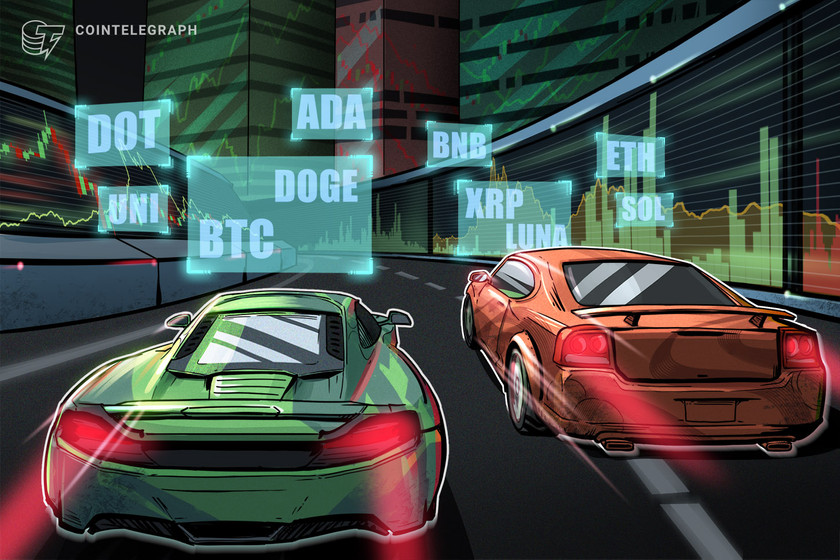 Altcoins are still flashing bullish signals but Bitcoin’s steady slide toward its swing low could put a damper on the market’s positive sentiment.

Bitcoin’s recent plunge does not seem to have shaken the investors and data shows that exchange reserves were down to 2.399 million Bitcoin (BTC), which is close to the May all-time low at 2.390 million Bitcoin. Ki Young Ju, CEO of on-chain analytics platform CryptoQuant, said this could result in a “sell-side liquidity crisis on Bitcoin.”

Although Bitcoin has outperformed gold by a huge margin in 2021, Omega Advisors chairman and CEO Lee Cooperman remains averse to investing in it because he said that he does not understand Bitcoin. The billionaire investor still considers gold to be a better store of value.

A new poll from research and data analytics firm YouGov showed that 43% of baby boomers strongly oppose the idea of Bitcoin being used as legal tender in the United States. However, 44% of respondents in the 25–34 years age group were supportive of Bitcoin as legal tender.

Could Bitcoin’s failure to stage a strong recovery attract further selling and will this drag altcoin prices lower? Let’s study the charts of the top 10 cryptocurrencies to find out.

Bitcoin has been trading between the moving averages for the past two days. This suggests that bulls are buying on dips near the 50-day simple moving average (SMA) ($44,934) but bears are not willing to give up and are selling near the 20-day exponential moving average (EMA) ($47,774).

This tight-range trading is unlikely to continue for long. The 20-day EMA has started to turn down and the relative strength index (RSI) has dipped into the negative zone, indicating that bears have the upper hand.

If bears sink the price below the 50-day SMA, the BTC/USDT pair could drop to the strong support at $42,451.67. This is an important level for the bulls to defend because a break below it will signal a possible change in trend.

Alternatively, if bulls drive the price above the 20-day EMA, the pair could retest the overhead zone of $50,500 to $52,920. A breakout and close above this zone will signal the resumption of the uptrend.

Although the bulls defended the $3,377.89 level for the past three days on a closing basis, they could not sustain Ether (ETH) above the 20-day EMA ($3,464). This suggests selling by bears at higher levels.

The sellers have pulled the price below $3,377.89 on Sept. 10, increasing the possibility of a drop to the critical support at $3,000. The 20-day EMA has started to turn down and the RSI has dipped below 48, indicating a slight advantage to bears.

If the ETH/USDT pair rebounds off $3,000, it will suggest accumulation at lower levels. The pair may then remain range-bound for a few days. The bulls will have to propel the price above $3,567.06 to start the journey to $4,000.

The long tail on Cardano’s (ADA) Sept. 8 candlestick suggests aggressive buying at lower levels. The bulls successfully defended the $2.47 support for the past two days but could not push the price above the 20-day EMA ($2.59).

This attracted strong selling today, pulling the price below $2.47. The ADA/USDT pair could now drift down toward the 50-day SMA ($2.08). The downsloping 20-day EMA and the RSI below 46 suggest that bears have a slight edge.

This negative view will invalidate if the price rebounds off the current level and rises above the 20-day EMA. Such a move will suggest that the correction may be over. The pair may then gradually move toward the overhead resistance zone at $2.97 to $3.10.

Binance Coin (BNB) turned down from the overhead resistance at $433 on Sept. 9–10, which suggests that bears are selling on relief rallies.

The bears are currently attempting to pull and sustain the price below the 50-day SMA ($405). If they manage to do that, the BNB/USDT pair could drop to the next major support at $340. The downsloping 20-day EMA ($450) and the RSI in the negative zone suggest advantage to bears.

Contrary to this assumption, if the price rebounds off the 50-day SMA, the bulls will make one more attempt to push the pair above the 20-day EMA. If they succeed, the positive momentum could pick up and the pair may rally to $518.90.

The bulls pushed Ripple (XRP) above the 20-day EMA ($1.16) today but the long wick on the day’s candlestick shows aggressive selling at higher levels.

The bears will now try to sink the price below the 50-day SMA ($1). The 20-day EMA has turned down and the RSI has slipped into the negative territory, indicating the path of least resistance is to the downside.

Solana (SOL) remains in a strong uptrend. The bulls pushed the price above the psychological resistance at $200 on Sept. 9 but the long wick on the day’s candlestick suggests profit-booking at higher levels.

The first support on the downside is at the trendline, which is near the 38.2% Fibonacci retracement level at $158.78. A strong rebound off this support will suggest that traders are buying on every minor dip.

They will then try to resume the uptrend by pushing the price above $216. The rising moving averages and the RSI in the overbought zone suggest that bulls are in control.

Contrary to this assumption, if bears pull the price below the trendline, the SOL/USDT pair could drop to the 20-day EMA ($131).

The bulls have not been able to push and sustain Dogecoin (DOGE) above the 50-day SMA ($0.26) in the past two days, indicating a lack of demand at higher levels.

The bears will now try to pull the price to the critical support at $0.21. Repeated retests of a support level within short intervals tend to weaken it. The downsloping 20-day EMA ($0.27) and the RSI below 39 suggest advantage to bears.

If the $0.21 support cracks, the DOGE/USDT pair could extend its decline to the next support at $0.15. Conversely, if the price turns up from the current level or rebounds off $0.21 and breaks above the moving averages, the pair may start its journey to $0.35.

The bulls will now try to resume the uptrend by pushing the price above the overhead resistance at $35.68 but the long wick on today’s candlestick suggests the climb may not be easy. The bears are likely to defend the zone between $32.50 and $35.68 aggressively.

Terra protocol’s LUNA token bounced off from $22.95 on Sept. 7. This suggests that bulls flipped the previous resistance into support, which is a positive sign. The price rose above the 20-day EMA ($30.63) on Sept. 9, indicating strong buying on dips.

Aggressive buying today pushed the price above the previous all-time high at $36.89. This suggests strong demand at higher levels. The 20-day EMA has turned up and the RSI has risen above 68, indicating that bulls have made a strong comeback.

If buyers sustain the price above $36.80, the LUNA/USDT pair could resume its uptrend. The next target on the upside is $50. Conversely, if bears pull the price back below $36.89, the pair could drop to the 20-day EMA.

The bears flipped the $25 level into resistance and did not allow the price to rise above it on Sept. 8–9. Today, the sellers are attempting to sink Uniswap (UNI) below the Sept. 7 intraday low at $21.

The moving averages are on the verge of a bearish crossover and the RSI has dipped below 36, indicating that bears have the upper hand. If the $21 level cracks, the UNI/USDT pair could slide to $18.69 where buyers may attempt to stall the decline.

The views and opinions expressed here are solely those of the author and do not necessarily reflect the views of Cointelegraph. Every investment and trading move involves risk. You should conduct your own research when making a decision.