After touching important support late last week, the USD/ZAR has produced a slight reversal higher which may intrigue speculators.

As of this writing, the USD/ZAR is near the 14.16000 vicinity, which keeps the Forex pair within the lower realms of its mid-term price range. On Friday of last week, the USD/ZAR did hit the 14.06000 ratio, which sparked a slight move higher and followed by subsequent small reversals higher and lower. A price range of 14.12000 to 14.23000 has largely been produced since the lows produced late last week.

Yesterday’s price action proved to be rather cautious, which may have been expected taking into consideration the rather steady bearish trend the USD/ZAR has exhibited since the 20th of August. Traders must expect consolidation via their speculative positions on occasion. It is a healthy sign the USD/ZAR was able to produce a rather tranquil day of price action as the week began. The question now for speculators is if consolidation will build or pressures will mount.

Having attained a steady bearish trend the USD/ZAR may have additional room to traverse lower, but it will certainly have to prove support levels which were tested late last week can be made vulnerable. The speed of the decline in the USD/ZAR has displayed considerable velocity the past three-and-a-half weeks, which suggests the USD/ZAR had been overbought before as a safe haven response to social unrest in South Africa. Traders technically need to decide if the current price ratio of the USD/ZAR represents a clear equilibrium which will see a steady test of reversals higher and lower, or if one direction will dominate near term.

If global risk appetite continues to be displayed within the equity indices, there is reason to believe the USD/ZAR could produce additional bearish price action. However, the 14.05000 to 13.95000 junctures may prove quite durable. Traders who continue to foster selling sentiment should use these lower support ratios as optimistic take profit targets, and actually they may prove to be overly ambitious in the short term.

Quick-hitting trades using specific take profit and stop loss precautions is suggested while pursuing the USD/ZAR in the near term. If current resistance near the 14.20000 is not challenged strongly and prices are sustained below, speculators may believe additional downside should be wagered on and sought. The USD/ZAR continues to look like an opportunistic chance to seek slight bearish sentiment. 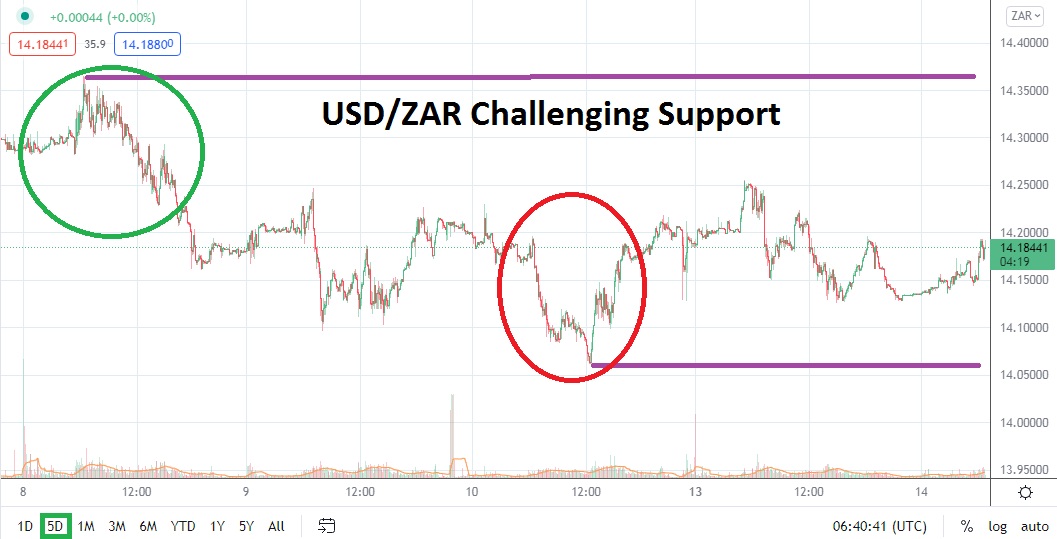