DOT/USD fell in a dramatic fashion yesterday as it was hit by a wave of nervous sentiment being expressed in the broad cryptocurrency market.

DOT/USD fell from a high which was within sight of the 36.0000 mark yesterday, to a sudden lightning quick low of nearly 22.0000. As of this morning Polkadot is trading near the 26.0000 ratio as it hovers near important support levels developed the end of August. Yesterday’s high of nearly 35.7000 touched marks not seen since the 19th of May, but unfortunately the mid-term apex didn’t last long. A sudden and brutal selling wave hit the broad cryptocurrency market and DOGE/USD suffered along with many of its major counterparts.

While many analysts are blaming what is being perceived as a complicated ‘rollout’ of Bitcoin in the nation of El Salvador yesterday as reason for the spikes lower within the digital asset world, the real reasons are not as simple as this mere statement. DOT/USD and a host of other important cryptocurrencies have been testing mid-term highs, and yesterday’s fierce selling action may have been a case of cashing in profits before they evaporate into thin air. Certainly nervous sentiment played a role in the sudden downturn, but when selling increased it happened with a ferocious and swift movement.

While DOT/USD was able to reverse off of yesterday’s low, the cryptocurrency remains within a critical juncture which will test the perceptions of speculators. If the 26.0000 level begins to be challenged lower this could indicate that late August’s value range is going to see a legitimate test. Between the 16th and 31st of August, DOT/USD demonstrated a price band between 22.7500 and 29.3000.

It should be remembered on the 20th of July DOT/USD was trading near the 10.0000 mark. Yesterday’s high is a significant achievement, and shows that plenty of optimism and speculative interest remains in Polkadot. The sudden downturn wasn’t a selloff caused by a change of heart regarding DOT/USD, it was a reaction to the broad market and Polkadot simply correlated to the move.

The bullish trend of DOT/USD actually continues to look rather tempting. However traders who are cautious may want to see stability increase within the market before attempting buying positions which try to take advantage of potentially oversold conditions in DOT/USD. Support levels need to be monitored. If the 26.0000 to 25.5000 junctures prove durable in the short term, this could set the table for a bullish reaction higher. 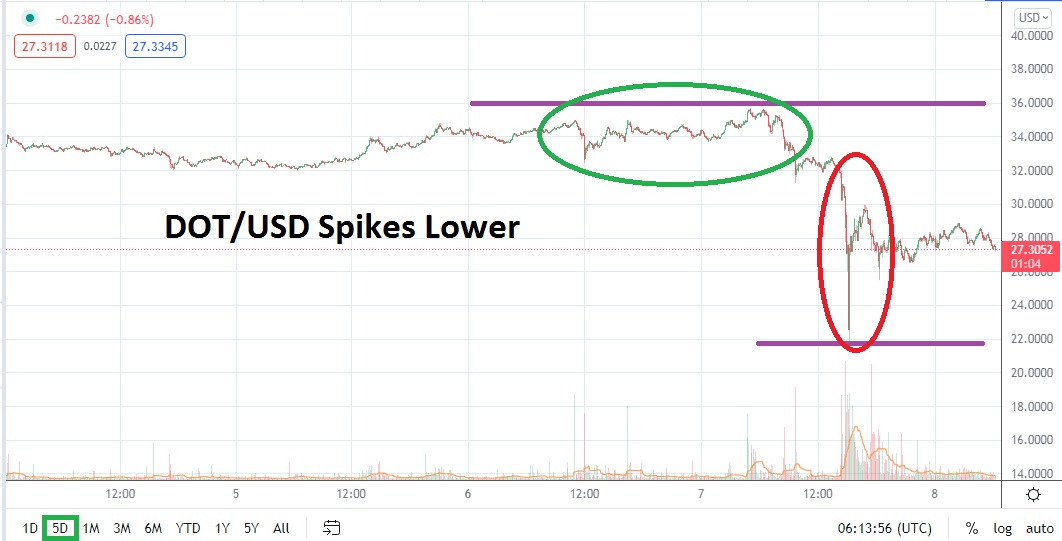