It was quite the volatile start that might be expected of a typical New Year, let alone one proceeding the year 2020.

On Friday, Wall Street scaled new highs on the hopes of more stimulus from Washington were shaken a bit by a senator’s comments.

However, US President-elect JoeBiden said his economic package will be in the trillions of dollars and the senator’s comments were disputed.

The latest rally in the S&P 500 overcame labour market data early in the day that showed the US economy shed jobs for the first time in eight months in December.

Payrolls were -140k, weaker than the +50k consensus. Unemployment held at 6.7%, although it continues to be understated by a net decline in the participation rate and lingering classification issues. Hourly earnings rose 0.8%, with strength due to composition effects.

A weaker jobs print reinforces the need and expectation for additional fiscal support and the theme of such will continue this week ahead.

The market will continue to watch the events on Capitol Hill next week — not just for a potential impeachment vote against President Trump but for signs that Democrats may be working on additional fiscal stimulus.

Georgia Democrats Jon Ossoff and Raphael Warnock shifted control of the Senate to Democrats last week and investors are now betting that the new Democratic majority in Congress will move quickly and consider a package of $1 trillion or more. Biden said Friday the total will be in “the trillions of dollars.”

Meanwhile, politics and politicians are likely to continue dominating the headlines, as Democrats seek President Donald Trump’s removal after a mob of his followers took over the Capitol Building on Wednesday.

However, while disturbing, the temporary assault did not ruffle markets, and the removal of Trump is not expected to receive enough Republican support to succeed with just days remaining in his term  — Biden is scheduled to be sworn in on Jan. 20.

Before that, fourth-quarter earnings season begins with the rollout of big banks’ reports Friday, when JPMorgan, Citigroup and Wells Fargo on tap.

There will also be a long list of Fed speakers including Chairman Jerome Powell, who is scheduled for a webcast from Princeton University Thursday.

On the data front, the Consumer Price Index inflation data is released Wednesday and December’s Retail Sales are reported Friday.

Retail sales are expected to fall for a third straight month due to COVID restrictions.

With respect to CPI, the Fed is seemingly not looking to backstop rates and the data is already baked into the market and the data is expected to reflect COVID as disinflationary.

Markets have begun to price in rising expectations in the bond market as seen through the 10-year breakeven. Last week, it went as high as 2.1% where the average level of inflation is expected over the next 10 years as markets weigh the impact of the virus.

The US has reported more than 4,000 deaths from Covid in one day for the first time as investors worry vaccines are being too slowly deployed.

Earnings season could be the catalyst for the push to the line considering how the certainty that comes with earnings should be good for stocks against a backdrop of heavy uncertainty.

From a 4-hour perspective, the price is meeting a key level of support: 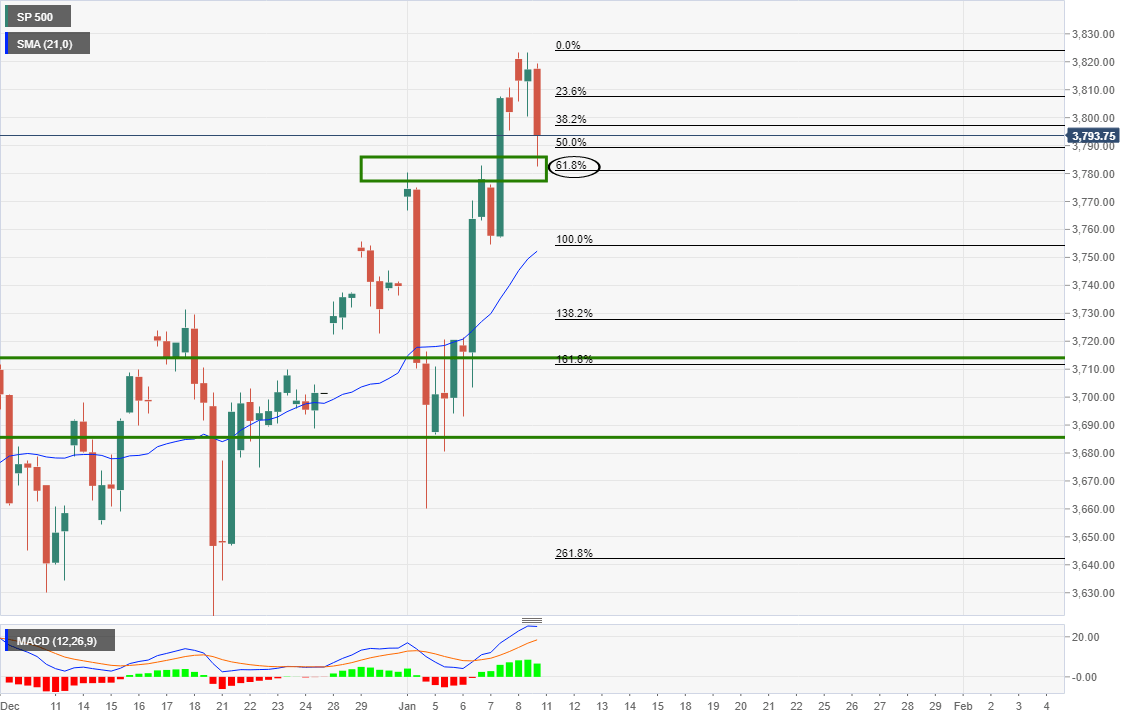 A break below the support opens risk to the downside for the medium term. 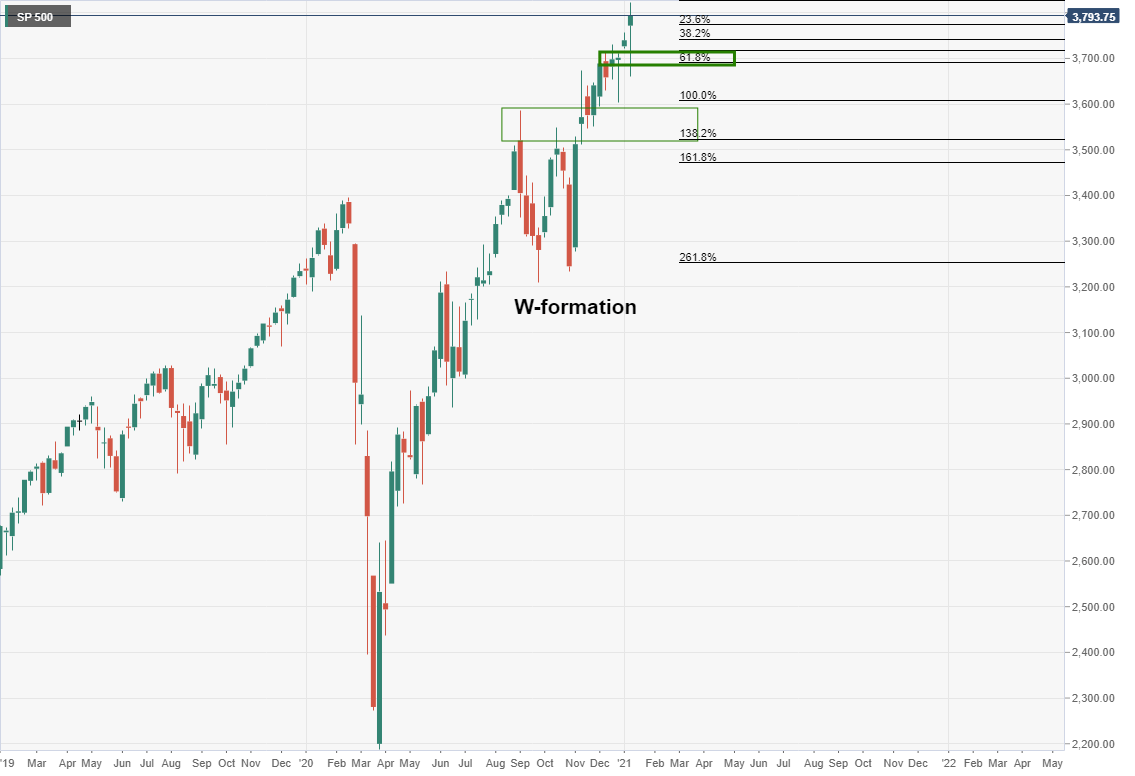 The longer-term picture shows a W-formation for which would be expected to draw in the price back to test at least a 38.2% Fibonacci retracement. However, a deeper correction to the 61.8% aligns with structure. 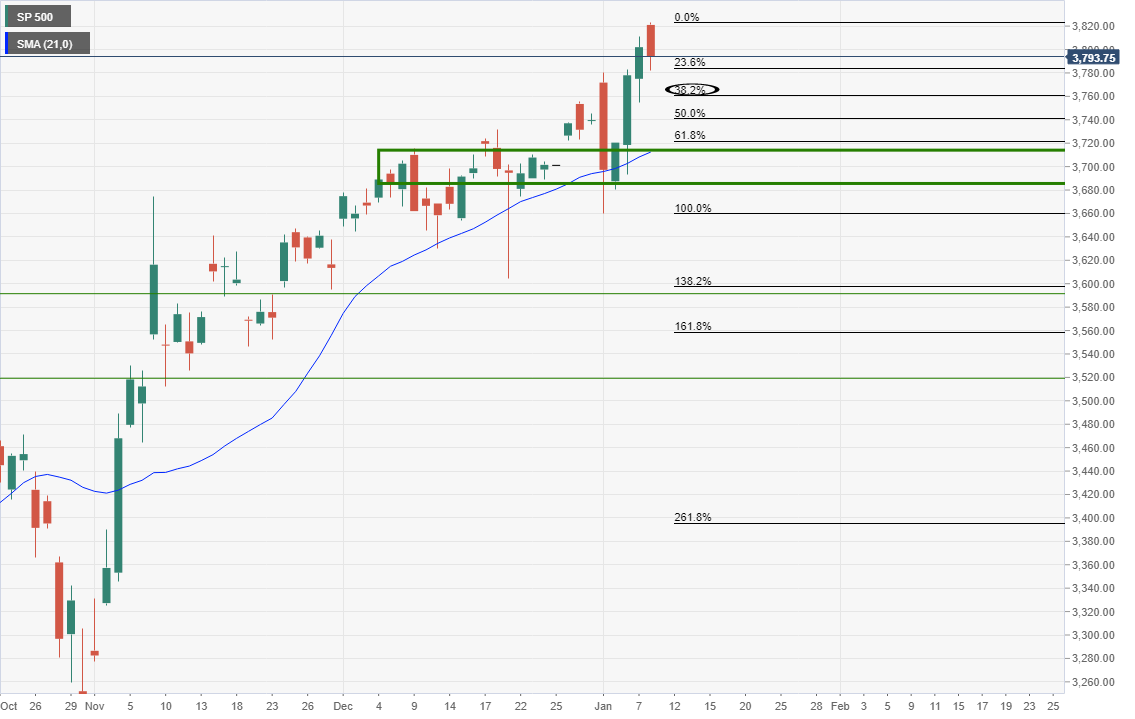