Markets look like a sea of green this morning with sentiment seemingly improving from the influx of risk aversion last week. Major stock indices like the Nasdaq, Dow, S&P 500, and Russell 2000 are extending higher alongside crude oil prices early Monday. The Nasdaq is up 0.75% intraday, for example, and trades just a stone’s throw away from all-time highs. Perhaps news this morning that the FDA has officially granted full approval to Pfizer’s covid vaccine is helping spur appetite for risk.

The latest flash US PMI report from IHS Markit just crossed the wires as well, which disappointed relative to market forecast and highlighted how economic activity is slowing. As detailed on the DailyFX Economic Calendar, the composite PMI index dropped to 55.4 in August from 59.9 in July as both manufacturing and services sector subcomponents turned lower. This could be viewed as ‘bad news is good news’ for equity investors because deteriorating economic outlook and downside risks posed by the delta variant of covid has potential to see Federal Reserve officials delay their taper timeline. 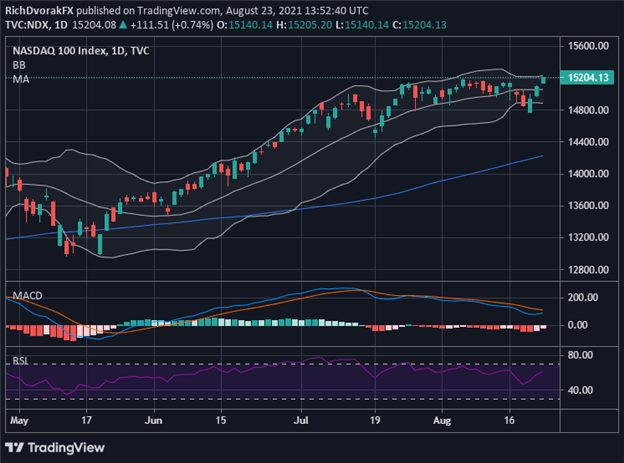 That said, the uninspiring US PMI report stands out as a precursor to this week’s annual Federal Reserve Symposium at Jackson Hole. The previously scheduled in-person event was just moved to a virtual venue “due to the recently elevated COVID-19 health risk level.” Not to mention, Dallas Fed President and known hawk Robert Kaplan stated last Friday how he may need to adjust his view for tapering asset purchases sooner rather than later if the delta variant wave persists.

This similarly increases the likelihood for traders expecting a Jackson Hole taper announcement to be disappointed. Nevertheless, it may be a choppy ride for markets until clarity is provided by Fed Chair Powell who is slated to step into the limelight with his Jackson Hole speech on economic outlook due Friday, 27 August at 14:00 GMT.

Connect with @RichDvorakFX on Twitter for real-time market insight