In the wake of one of the more tumultuous and depressing years (culminating in one of the most embarrassing days) in recent US history, Americans could desperately use a dose of good news. Unfortunately the highly-anticipated report is unlikely to show much improvement to the US labor market. Economists are expecting todya’s jobs data to show that the US economy created just 68K net new jobs and that the unemployment rate ticked up 0.1% to 6.8%.

While the US government was able to reach an agreement to distribute $600 in additional stimulus checks ahead of the new year, those checks are just now hitting citizens’ bank accounts, so they won’t bolster the December jobs report. Meanwhile, the winter resurgence of COVID-19 shuttered countless businesses and took a big bite out of household incomes across the country. Once again, support from the (slow) rollout of the vaccine is unlikely to have any impact on the December jobs release.

Speaking both figuratively and literally, December marked dark days for the United States, though hopefully the old adage that “the night is darkest just before the dawn” will bear true as we move forward. 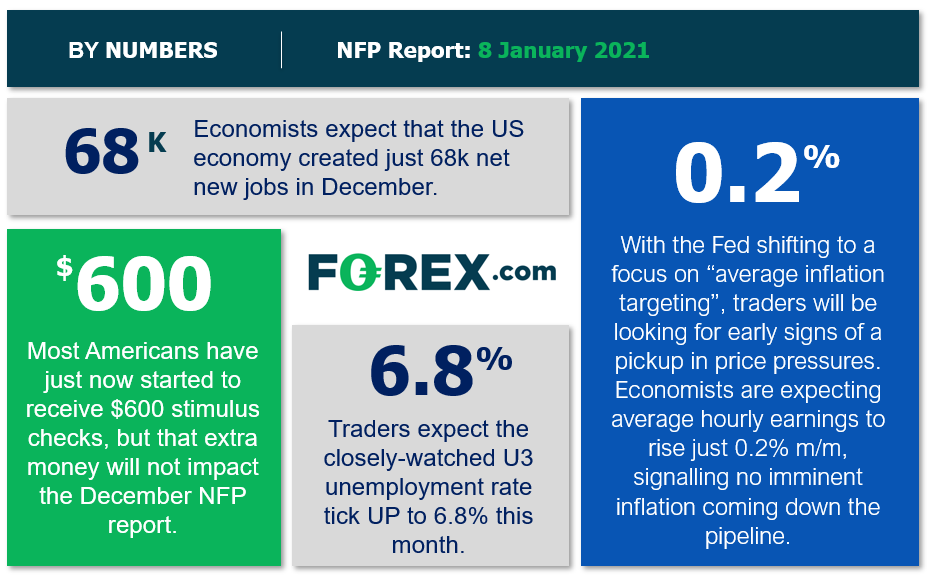 As regular readers know, there are four historically reliable leading indicators that we watch to help handicap each month’s NFP report:

As we’ve noted repeatedly over the last few months, traders should take any forward-looking economic estimates with a massive grain of salt given the truly unparalleled global economic disruption as a result of COVID-19’s spread. That said, weighing the data and our internal models, the leading indicators point to a potentially worse-than-expected reading from the December NFP report, with headline job growth potentially seeing an outright decline of -25k to -125k jobs, albeit with a bigger band of uncertainty than ever given the current state of affairs.

Regardless, the month-to-month fluctuations in this report are notoriously difficult to predict, so we wouldn’t put too much stock into any forecasts (including ours). As always, the other aspects of the release, prominently including the closely-watched average hourly earnings figure, will likely be just as important as the headline figure itself.

While its trading up today, the has been absolutely decimated over the last nine months, with the widely-followed US dollar index now approaching its lowest level in over six years. The news that Democrats have secured control of the US Senate by the thinnest of margins suggests we could see additional fiscal stimulus and deficit spending over the next two years. More immediately, a better than expected NFP report could prompt a quick relief rally in the greenback, though any counter-trend move may be short-lived.

If we see a stronger-than-expected report, or are clearly stretched to the topside and therefore candidates to see a pullback into next week. On the other hand, a weaker-than-anticipated reading could prompt the US dollar to resume its downtrend against the Japanese yen in particular, which remains far from oversold territory following today’s rally.