This week’s US (NFP) report will be interesting for many reasons. One of the most intriguing reasons to watch the report is because most major Western markets will be closed for Good Friday. Major US and European stock markets will be closed in observation of the Christian holiday, while the US bond market will see only a half-day of trade; the FX market will, of course, remain open.

Friday marks the first time NFP coincides with Good Friday since 2015 (though we also saw the two overlap in 2012 and 2010 as well), so we have even less of a historical record to draw on than usual. For what it’s worth, the NFP report missed expectations on all three of the most recent Good Friday + NFP days, though the showed no consistent trend across those days.

Looking ahead, we don’t yet have access to the market’s expectations for Friday’s release, but it is noteworthy that last month’s report showed stellar headline jobs growth, with the US economy adding 379K jobs, the highest reading in four months, and wages rising by 0.2% m/m.

As we saw in the March FOMC meeting, the central bank isn’t likely to make any changes to monetary policy any time soon (Fed Chairman Jerome Powell actually scoffed when asked when the central bank would start tapering its asset purchases before quipping “not yet”), so this NFP report is unlikely to have an immediate impact on Fed policy. That said, another strong report, especially if accompanied by an uptick in the average hourly earnings figure, could prompt speculators to start buying US assets in anticipation of the Fed removing some of its stimulus down the line.

While we don’t have the usual “dueling jobs reports” dynamic that we often seen around the US NFP report (Canada doesn’t release its until next Friday, April 9), will still be a key pair to watch around this week’s NFP release. The North American pairing has been trending consistently lower for over a year now, with rates carving out a well-defined bearish channel over the last five months in particular: 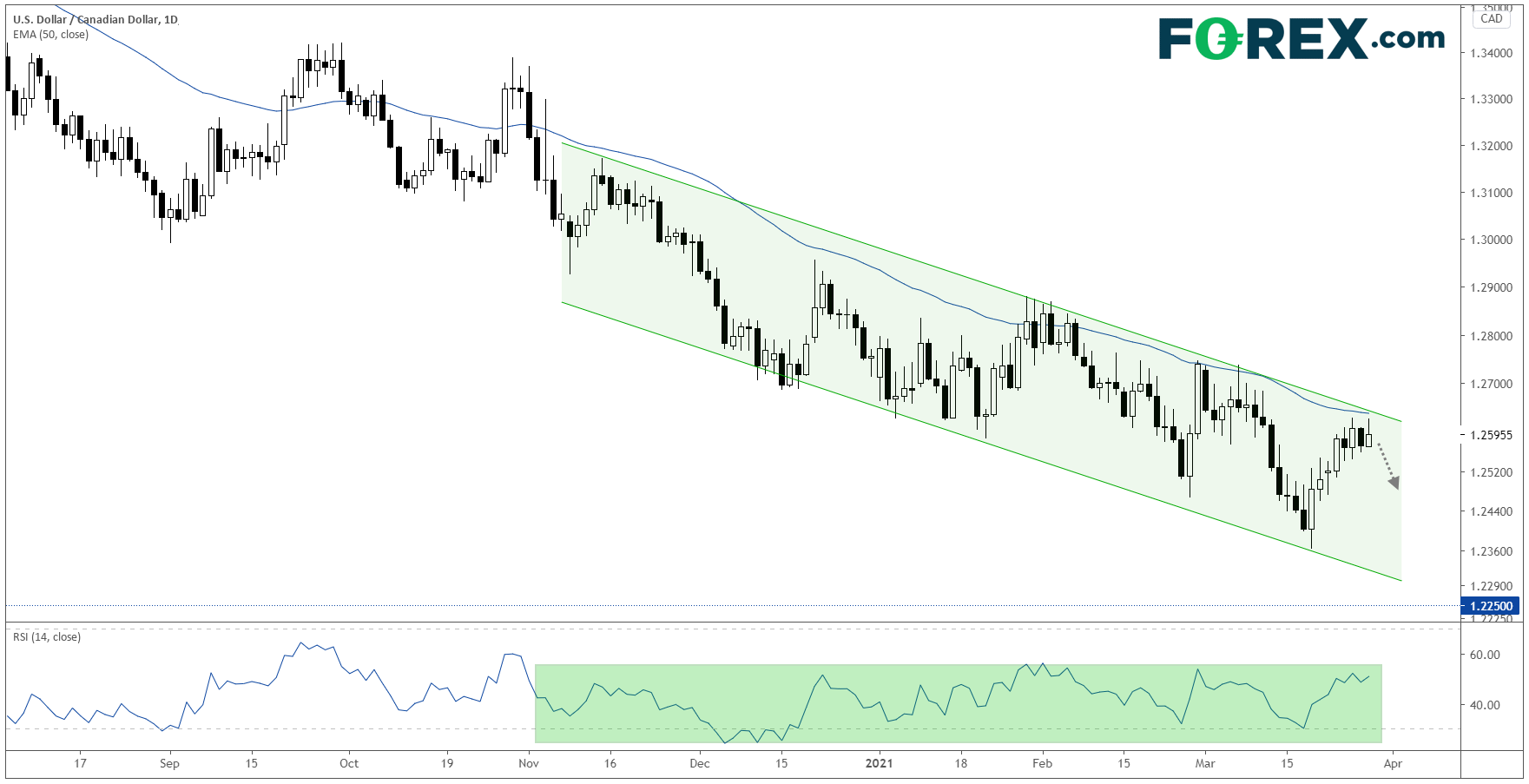 With the pair’s 14-day RSI remaining stubbornly below the 55 level and the 50-day EMA capping USD/CAD rallies, the path of least resistance remains to the downside for now. Especially if we see a weaker-than-anticipated NFP report Friday, the pair could roll over once again and retest its multi-year low back under 1.2400.

On the other hand, a strong NFP report could be just the catalyst to finally break the bearish trend; if the unit is able to close above 1.2650 or so, a rally back to the early February highs above 1.2800 could be in the cards next.