The Nasdaq 100 index entered a brief consolidation period after rallying 11.3% from end-March to mid-April. The index’s rally appears to be taking a pause as profit-taking kicked in, allowing buyers and sellers to change hands. The overall trend remains bullish-biased as suggested by upward-sloped 50- and 100-day SMA lines.

A typical inverse “Head and Shoulders” (“H&S”) pattern was formed during mid-February to early April when the Nasdaq 100 entered a technical correction. This can be a strong bullish trend-reversing indicator and is typically formed when a downtrend is depleted and about to turn around. The benefit of using a H&S setup is that it defines areas to set stop-loss and profit-taking levels.

A general rule of thumb suggests that the low point of the “right shoulder” will specify the stop level whilst the vertical distance between the neckline and the peak of the “head” will approximate the distance to the upside objective – 1,085 points in this case. A completed inverse “Head and Shoulders” may pave the way for the Nasdaq 100 index to challenge 14,386 – a level generated by adding 1,085 points to the neckline. 14,386 is very close to the 161.8% Fibonacci extension level (14,361), where some selling pressure may be found.

The MACD indicator is trending lower after forming a bearish crossover, suggesting that upward momentum might be fading.

On the weekly basis, the Nasdaq 100 index has returned to its primary uptrend after a brief technical pullback. The trend-defining 10-period SMA line has flipped upward, suggesting that near-term path has turned bullish. A Fibonacci extension points to a key resistance level at 14,285 – the 61.8% mark – if price can hold above the 50% extension (13,598). 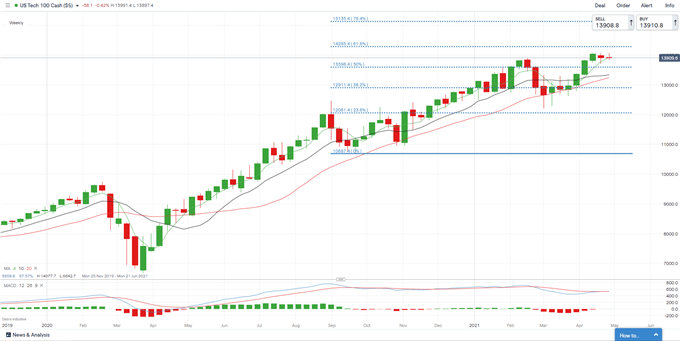