The University of Michigan’s preliminary consumer sentiment index for March printed at 83.0 vs. a forecast of 78.5, handily beating the forecast. This print marks the index’s highest point since last March, before the pandemic and related containment measures took effect. While sentiment remains well below its pre-pandemic levels, the solid print in March demonstrates that the outlook of consumers is improving. 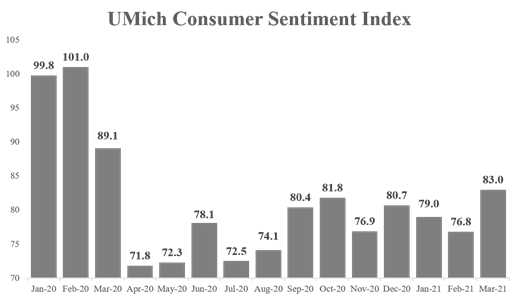 Friday’s prints are further examples of the strengthening outlook for the US economy. A muted February CPI print on Wednesday and a similarly-weak PPI print earlier Friday has helped to put inflation fears on the backburner. President Biden signed his stimulus bill into law on Thursday, which will provide a strong boost to the economic recovery. US vaccination efforts are continuing effectively, with nearly 100 million doses administrated. This combination of stimulus and vaccinations look to put the economy back on track sooner rather than later. Policymakers are expecting a strong H2 2021.

After hitting a nearly three year low in early 2021, the US Dollar resurged as longer-term Treasury yields moved higher. Falling to a nearly two-month low around 89.70 in late February, the DXY rebounded back above the 90.00 level and has remained there since. While 10yr Treasury yields have consolidated between 1.5% and 1.6% since late February’s volatility, the DXY has remained strong above the 91.00 level. 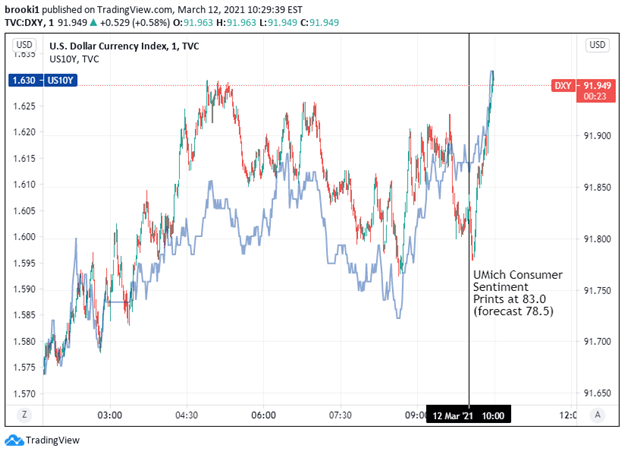 US 10yr Treasury Yields rose to new pandemic highs above the 1.60% level on Friday morning. The DXY whipsawed in reaction to the UMich prints, falling from 91.83 to 91.78 before rebounding higher alongside the upward move in Treasury yields, rising to currently trade around the intraday high of 91.95.

Further price action in the US Dollar and in US Treasury yields may hold off until March’s FOMC meeting, where Fed policy makers will likely discuss the rise in longer-term yields and weigh if a response is necessary. The FOMC will also release an updated version of its dot plot, showing when members expect rate hikes to occur.