Investors will have a chance to assess the health of the equity market and its outlook when earnings season ramps up in earnest this week. The big banks will officially kick off the third quarter reporting period with JP Morgan unveiling results on Wednesday before the opening bell, followed by Bank of America, Citigroup, Wells Fargo and Morgan Stanley on Thursday, and Goldman Sachs on Friday.

The table below summarizes key earnings announcement dates and EPS expectations for some of the largest U.S. banks this week: 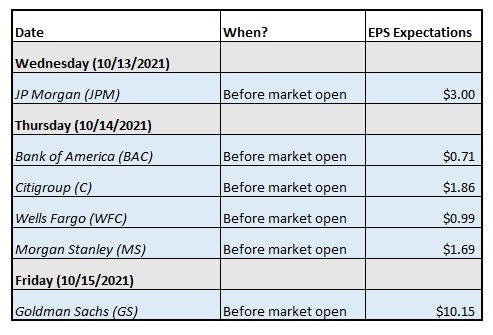 After a spectacular performance in the second quarter, large-cap bank profits are expected to moderate, but should remain healthy and robust by historical standards, up 20% year-over-year, supported by consumer fees, wealth management fees and strong gains in the investment banking divisions on the back of record M&A activity. JPMorgan, Goldman Sachs, and Morgan Stanley, three dominant forces in this arena, are well positioned to benefit from the trend and may see their underwriting and advisory fees rise more than 20% year-over-year, an outcome that can boost their bottom lines, offsetting weakness in fixed income and equity trading volumes.

Focusing on thequarterly report cards, traders should scrutinize how the macroeconomic backdrop has influenced bank fundamentals in recent months and closely follow corporate guidance to estimate future earnings and adjust their expectations accordingly. Although pessimism has percolated through the market on signs of an economic slowdown, banks are likely to remain upbeat about lending activity amid faster loan demand growth and improving margins as bond yields begin to recover and the Treasury curve steepens.

One important thing to watch for should be the outlook for net interest income, which accounts for more than half of the banking industry revenue. If lenders show confidence that this metric will trend higher in coming months on a sustained basis as the Fed begins to tighten monetary policy and the economy transitions towards higher rates, megabank stocks could continue to fare well over the next few months. This would leave the financial XLF ETF in a good place to command strength and hit new record highs heading into the end of the year.

XLF has been trading inside the confines of an ascending channel since April and is now approaching the bullish pattern’s upper boundary near 39.25, a key resistance. If buyers manage to push price above this technical barrier, the ETF would be in uncharted territory, but it could potentially encounter resistance around 41.20, an upside target obtained by projecting half the height of the channel from the breakout point.

On the other hand, if sellers regain control of the market and XLF corrects lower, the first support to consider appears in the 37.50 area. Should price drop below this level, we could see a pullback towards the September low at 36.00