According to IG Client Sentiment (IGCS), retail investors continue increasingly betting that gold and silver prices may rally, building onto positions from last week. IGCS can at times be a contrarian indicator. If this trend in positioning continues, XAU/USD and XAG/USD may be at risk of a reversal. To learn more, check out last week’s recording of my webinar above where I discussed how you can use IGCS in trading markets.

The IGCS gauge implies that about 81% of retail traders are net-long gold. Upside exposure has increased by 2.12% and 15.71% over a daily and weekly basis respectively. The fact that traders are net-long hints that prices may continue falling. This is further underscored by recent shifts in sentiment, offering a stronger bearish contrarian trading bias for gold. 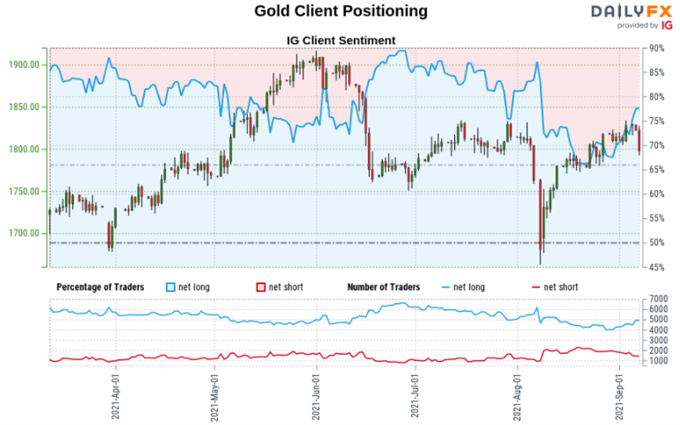 XAU/USD, as confirmed a breakout under a bearish Rising Wedge chart pattern. This has opened the door to resuming the broader downtrend since last year’s top. Furthermore, a bearish crossover between the near-term 20- and 50-period Simple Moving Averages (SMAs) may form on the horizon. That could further underscore the outlook to the downside.

Immediate support seems to be the August 26th low at 1778, followed by the August 16th low at 1769. Clearing these points would bring the August trough at 1680 closer into focus. On the flip side, resuming the near-term uptrend since last month entails taking out the key 1834 – 1825 resistance zone. Above that brings the August 2020 trendline closer in sight.

The IGCS gauge implies that about 93% of retail traders are net-long silver. Downside exposure declined by 9.52% and 26.67% over a daily and weekly basis respectively. Since the majority of traders are net-long, prices may continue falling. This is further underscored by recent changes in positioning, offering a stronger bearish contrarian trading bias. 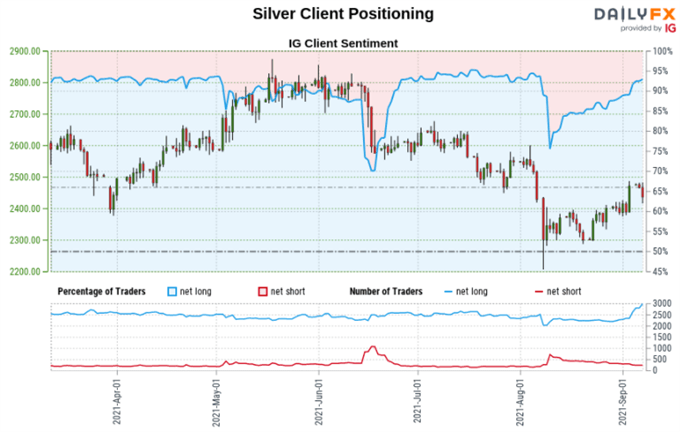 On the 4-hour chart below, silver arguably remains in a near-term uptrend from the August low. Prices recently attempted to push above the 200-period SMA, but follow-through was lacking. XAG/USD came back down to the SMA after leaving behind resistance at 24.868.

Clearing the SMA as well as the 24.212 inflection point may open the door to facing a rising range of support from last month. Otherwise, resuming the near-term uptrend entails taking out 24.868 towards the 78.6% Fibonacci retracement at 25.208 before touching the August peak at 26.002.