Hurricane Nicholas touched down in Texas and Louisiana this morning prompting President Biden to declare a state of emergency for Louisiana, which will supplement local response efforts and rescue teams.

The Gulf region has already experienced a reduction of oil and gas supply of a round 40% (794,000 barrels per day (bpd)) as these operations remain shut in anticipation of Hurricane Nicholas. The storm is expected to be a slow moving storm bringing large rain and windfall with a large likelihood of mass power outages and flooding

The Hurricane Ida period brought about elevated oil prices, largely trading between $70 – $73 a barrel, which occurred near the upper boundary of a rather large descending channel. However, it is only after the subsidence of Hurricane Ida and the anticipation of Hurricane Nicholas that prices have broken above the channel where they remain supported.

A break and hold above the 72.67 (61.8% Fib kevel drawn from the July high to the August low) set the tone for the bullish move as we have yet to witness any sort of retracement. 74.45, the 76.4% Fib and prior high, becomes the nearest level of resistance with the broader resistance zone of 75.50 – 76.35 identified as the next big challenge.

While the fundamental backdrop remains bullish, the possibility of a retracement or reversal should never be discounted. The 72.67 level presents itself as the first level of support with 17.10 as the next. 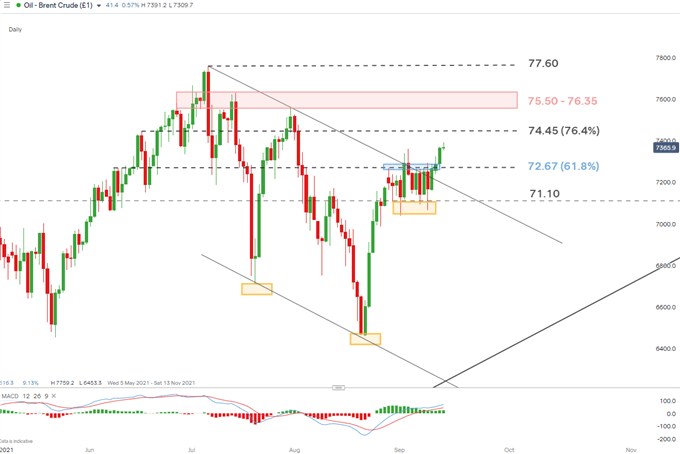 The decision for OPEC to trim its global oil demand forecast for Q4 was covered in the weekly oil forecast and comes as little surprise in the wake of the Delta variant as well as the overly-optimistic initial figure.

The organization cited the Delta variant and went on further to say, “The pace of recovery in oil demand is now assumed to be stronger and mostly taking place in 2022”.

The organization expects oil demand to average around 99.70 million bpd in the final quarter of 2021, down 110,000 bpd from last month’s forecasted figure. OPEC revised their 2022 global oil demand growth forecast to 4.15 million bpd compared to the previous 4.2 million bpd. 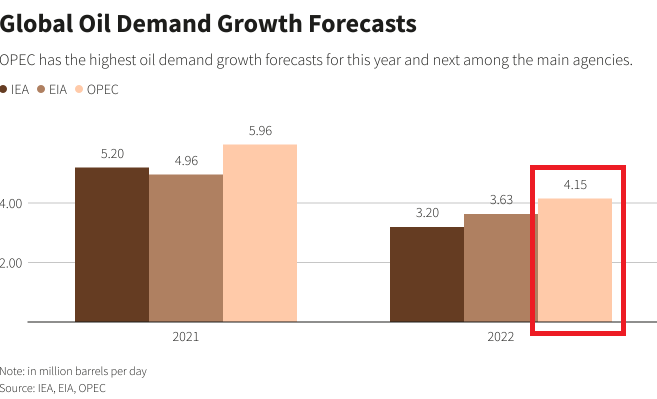