During yesterday’s trading session, gold prices fell sharply in light of the strong interest of investors to buy the US dollar after talks failed to approve more plans to stimulate the US economy.

The demand for the US currency as a safe haven increased after the drop in stock prices amid growing concerns about growth due to the rapid rise in new coronavirus cases around the world. Accordingly, the gold price plummeted to $1870 an ounce and at the beginning of the session was stable around $1911 an ounce, before stabilizing around the $1882 at the time of writing the analysis.

Generally speaking, uncertainty about the upcoming US presidential election, and the stalled stimulus talks, is hurting riskier assets as well as the gold market. Investors were also closing long positions in gold contracts in order to increase profit margins after the sharp decline in the stock markets.

US President Donald Trump admitted that talks about the coronavirus stimulus package had collapsed ahead of Election Day. “After the election, we’re going to have the best stimulus package I’ve ever seen,” Trump told reporters at the White House. Regarding who will win those elections, Joe Biden, the Democratic presidential candidate, still seems to enjoy a comfortable lead in opinion polls across the country, but at the same time, potentials of Trump’s victory cannot be ignored. This makes the risk of the US dollar being highly vulnerable to further buying as a safe haven, especially in the event that the election results are outside the expectations of US opinion polls. Therefore, the appreciation of the US dollar is likely to strongly affect gold prices.

Regarding the outbreak of the Coronavirus, cases have risen rapidly in the United States and Europe, prompting fears of a deepening economic slowdown. The United States has reported a record increase in daily infection rate. Nearly 30 states reported a record number of infections over the past week. For his part, the President of the European Union, Charles Michel, told the Italian newspaper La Stampa in a recent interview that the situation in Europe is “dangerous and alarming” and that the bloc should be more effective with testing policies, contact tracing, vaccinations and quarantine.

According to the technical analysis of gold: On the gold daily chart, and as we expected before, price of gold is on a date with a price explosion in one of the two directions, and this time towards further decline. Stability below the $1900 resistance raises selling operations, and at the same time, pushes the price of gold towards support levels at which gold investors would think of buying back, and the most appropriate for that are currently at 1866, 1852 and 1839, respectively. I still prefer to buy gold from every drop, as the factors that contribute to the return of gains are still present. The price of gold may wait for the results of the US elections next week to set a path over the coming weeks.

And to the upside, stability above the $1900 resistance will remain important for the bulls to return to control performance and contribute to pushing prices to higher levels.

Regarding the economic agenda data: Gold will interact today with the monetary policy announcements of the Central Bank of Japan and the European Central Bank, and Lagarde’s statements. This is in addition to the results of the economic data, on top of which are the US GDP growth rate and the weekly US jobless claims. 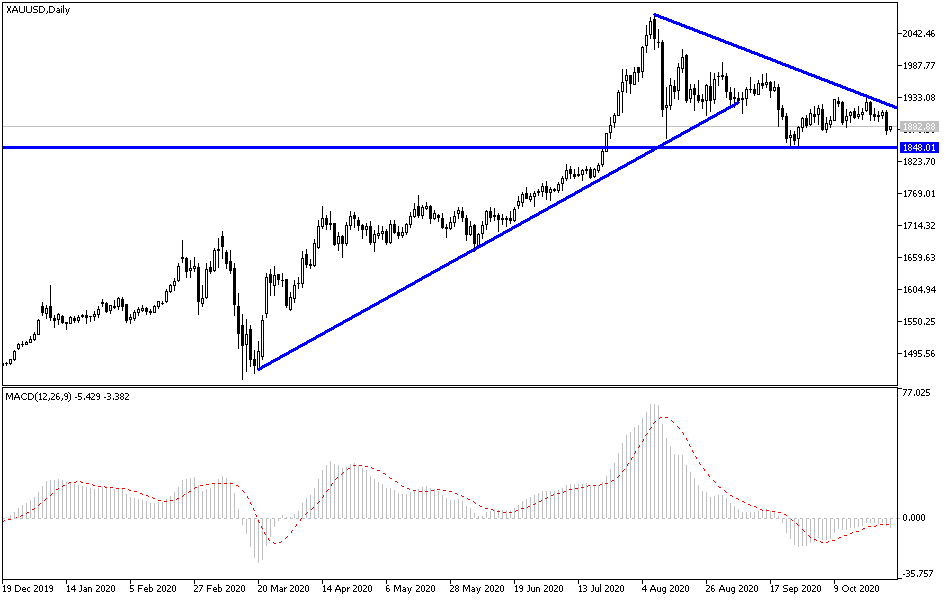