Gold has been subjected to selloffs that pushed it towards the $1783 level, settling around $1790 as of this writing. In the middle of the week’s trading, gold experienced its worst daily performance in months. The gains of the US dollar were the main factor for this decline. But at the same time, global fears of the rapid spread of the Delta variant will remain a contributing factor to the return of gold’s safe haven gains.

The commodities sector rose for a second week, with the Bloomberg Spot Index heading to a new closing high in ten years, according to analysts at Saxo Bank. Accordingly, Ole Hansen, commodity analyst at the company, believes that the renewed strength of the index has been led by growth and demand-dependent sectors in energy and industrial metals. He said in a note: “The push for a green shift, as one of the main reasons for our bullish outlook for the sector, is just beginning.

“After a few challenging months in terms of weather developments around the world, it appears that the push for governments to decarbonize their economies will accelerate. and “a development likely to create tighter markets across many “green” metals from copper and aluminum to zinc and nickel, not to mention many rare earth elements and even platinum and silver.” Hansen warned that the possibility of a winter gas crisis remains a real threat, thanks to low levels of gas stocks in both Europe and Russia. “Some companies may have to cut production in order to curb demand,” Hansen said.

Copper prices, often used as a gauge of global economic health, were almost flat on the London Stock Exchange, as investors exercised caution ahead of the European Central Bank meeting which could provide more clues to its gradual decision.

After the recent selloffs, the bullish outlook for the price of gold suffered a setback, and bulls need to get above the psychological resistance of $1800 again to regain confidence. Moving above that level will open the door for a move towards the resistance levels of $1819, $1827 and $1845. The technical indicators still have the opportunity to decline further before reaching oversold levels, which may happen if the gold price moves to the support levels at $1782, $1770 and $1755. The second and third levels are prime for buying gold again. 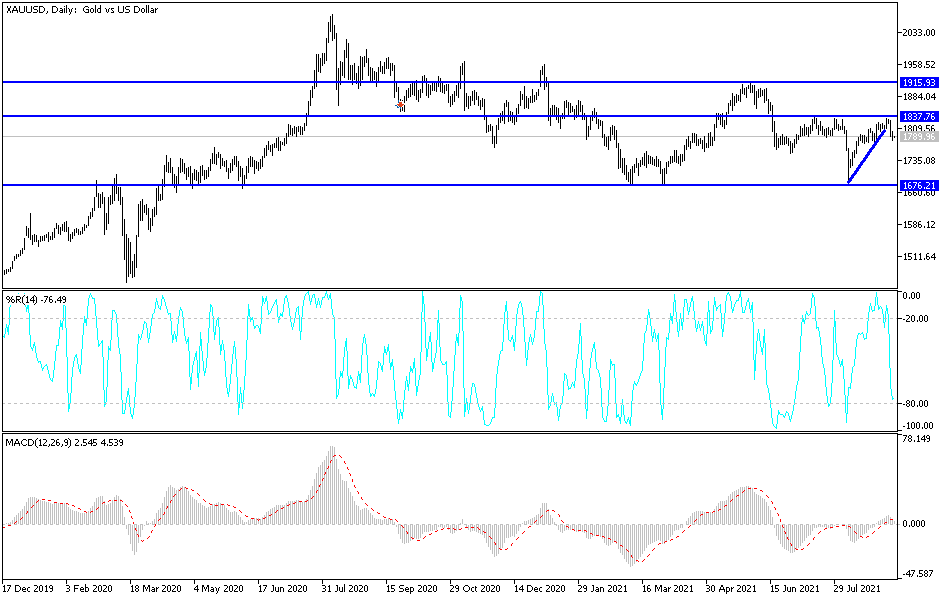