The price of gold has been trying to recover to stabilize above the psychological resistance of $1800, which may give the yellow metal the impetus to move higher to avoid selloffs. Gold futures pared their gains as the dollar stabilized against other major currencies.

Gold prices attempted to rally as investors opted for the safe haven commodity amid concerns about growth after the discovery of a new type of coronavirus and tighter restrictions on movement. New cases of the variant were found in the Netherlands, Denmark and Australia. Several countries, including the United States and Japan, have imposed travel restrictions. While the World Health Organization said it could take weeks to understand the severity of the variant, a South African doctor who treated the cases said symptoms so far appeared to be mild.

The World Health Organization has said the global risk from the omicron variant of the coronavirus is “extremely high” based on early evidence, warning of the potential for sudden spikes in the future with “serious consequences”. The United Nations health agency, in a technical briefing for member states that it highlighted to reporters on Monday, said that “high doubts” remain about the new alternative first discovered in South Africa, but it cautioned that the potential for more spread around the world is high.

Based on the possibility that mutations in omicrons could escape the immune response and enhance its ability to transmit between people, the WHO said, “the potential for more omicrons to spread globally is high.” She added: “Depending on these characteristics, there may be future increases for COVID-19, which could have severe consequences, depending on a number of factors including where increases may occur.” The new volatility is omicron as very high.

As I mentioned before, the psychological resistance will remain $1800 dollars, which is vital for the bulls to make further progress, because it may open for moves higher to the nearest resistance levels, which are $1819, $1828 and $1845. These levels can return gold to a bullish trend strongly again. On the downside, the important $1775 support must be broken through for the bears to gain more control. At the same time, the price of gold may move towards buying levels, the closest of which are: $1763, $1752 and $1740. Increasing global anxiety and the return of the epidemic restrictions may eventually stimulate the appetite for buying gold.

See also  Pound Sterling Can Be Stronger Than U.S. Dollar And Japanese Yen

The price of gold will be affected today by the level of the US dollar,  the testimony of Federal Reserve Chairman Jerome Powell and the announcement of the US consumer confidence reading. This is in addition to the extent of risk appetite. 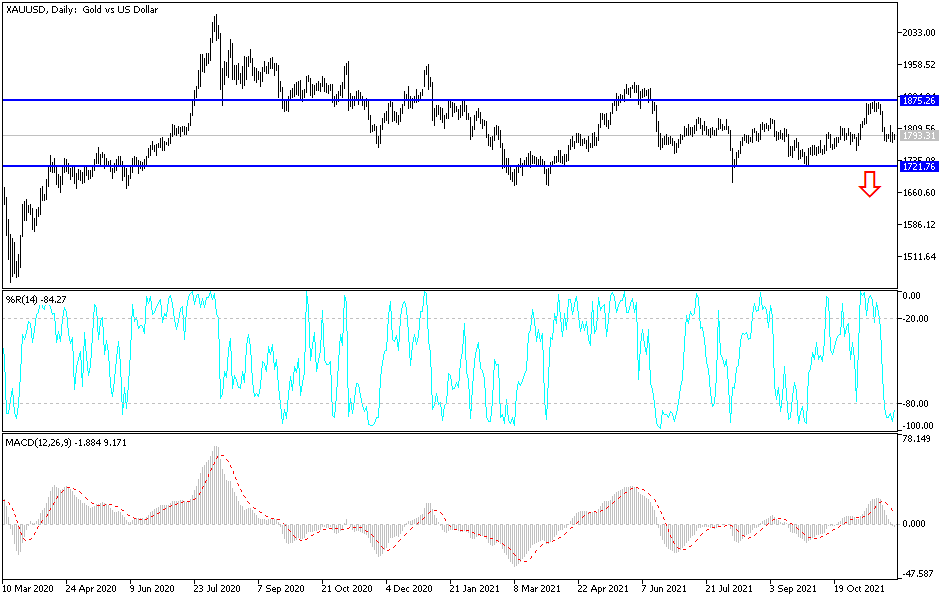