The British pound has often shown resilience in the face of a strong US dollar, now with momentum from expectations of imminent tightening of the US Federal Reserve’s policy. This explains the stability of the GBP/USD in recent trading sessions in a range between the 1.3545 support level and the 1.3673 resistance level. It is stable around the 1.3600 level as of this writing. The pound is also still supported by the prospect of the Bank of England tightening its monetary policy quickly as the energy crisis in the country will accelerate the pace of inflation stronger and faster than other global economies.

Expectations for a UK rate hike in late 2021/early 2022 were boosted on October 12 after the release of UK labor market data that painted a picture of an economy that continues to create jobs and sees an increase in wages. Record-high vacancies indicate that there is unlikely to be an increase in unemployment following the end of the government’s holiday plan in September, indicating an economy increasingly suffering from a shortage of spare capacity.

In short, the Bank of England will feel emboldened to raise interest rates soon, thus boosting UK bond yields and providing support for the British pound. Recently, Bank of England Governor Andrew Bailey showed his “concern” about above-target inflation and that the Bank “had to prevent this thing from becoming a permanent part”. As such, financial markets are now pricing in a 10bps rate hike in the UK in November. Commenting on this, Paul Robson, FX Analyst at NatWest Markets says: “The interest rate markets were pricing in an early rate hike from the BoE, and the central bank (yet) has not gone back on that expectation.”

However, NatWest Markets is of the opinion that the Bank of England’s rate hike in November is too early and that reducing expectations could eventually affect the British pound. However, UK monetary policy is “prepared for an early and perhaps steeper course than the European Central Bank, the Federal Reserve, and most major central banks.” This would ensure that five-year interest rates, which are positively correlated with the currency, remain supportive of the pound.”

The neutral state of the performance of the GBP/USD, evident on the daily chart, needs a catalyst to get out of this range, which may happen if the expectations are in favor of the dollar or the pound with respect to which will raise interest rates sooner. The bulls’ control over the performance will be strengthened if they move to 1.3762 and 1.3850, and then the psychological resistance 1.4000. On the downside, stability below the 1.3500 support will increase the bears’ control over the trend, and at the same time, the technical indicators will move towards strong oversold levels.

The British pound will be affected today by the announcement of the growth rate of Britain’s gross domestic product and the rate of industrial and manufacturing production in the country. From the United States, the Consumer Price Index and the minutes of the last meeting of the US Federal Reserve will be announced. 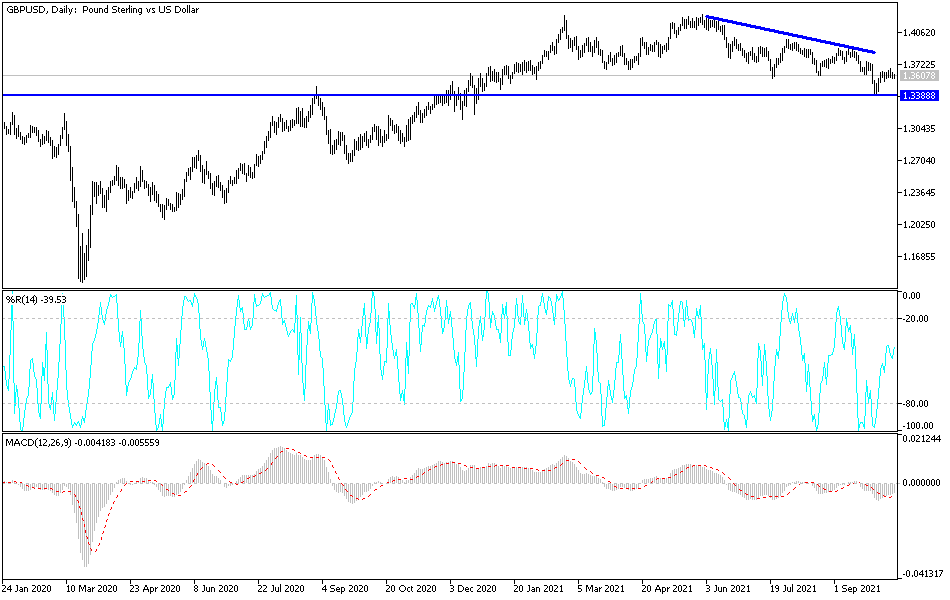