New indications from the Bank of England about raising interest rates contributed to the recovery of the pound against the other major currencies. The GBP/USD shot to the 1.3496 resistance level, recovering from the recent collapse towards the 1.3352 support levels. As I mentioned before, the monetary policy tightening race of the central banks will remain a decisive factor for the currency pair’s trends in the coming days.

Inflation in Britain accelerated more than expected to its highest level in a decade in October, increasing pressure on the British central bank to act on a rate hike as early as December. Data from the Office for National Statistics revealed that British consumer price inflation rose to 4.2 percent from 3.1 percent in September. This was the highest rate since November 2011. The rate was above economists’ expectations of 3.9 per cent and more than double the Bank of England’s 2 percent target.

The British central bank has expected inflation to peak at around 5 percent in April 2022, but it will decline materially from the second half of 2022. Commenting on the figures, Paul Dills, an economist at Capital Economics, said that when combined with the decent issuance of this labor market, a larger-than-expected jump in CPI inflation in October makes a December rate hike more likely.

The economist added that markets have gone too far by pricing rate hikes to 1.00-1.25% by the end of next year. The upward pressure of consumer price inflation came mainly from housing, household services, transportation, restaurants and hotels. On a monthly basis, consumer prices rose 1.1 percent, compared to 0.3 percent in September and economists’ expectations of 0.8 percent. Core inflation, which does not include energy, food, alcoholic beverages and tobacco, rose to 3.4 percent in October from 2.9 percent in September. This was also well above expectations of 3.1 percent.

Another report from the Office for National Statistics showed that producer price inflation reached its highest level in more than a decade in October, driven by the prices of petroleum products. Output price inflation rose to 8 percent from 7 percent in September and remained higher than the 7.3 percent economists had expected. The 8 percent inflation rate was the largest since September 2011.

Similarly, input prices rose at a pace of 13.0 percent annually, after the 11.9 percent increase a month earlier. Input price inflation was the strongest since September 2008. On a monthly basis, output prices rose 1.1 percent, the fastest since February 2013, compared to a 0.7 percent rise in September. Economists expected prices to rise moderately by 0.8 percent.

Similarly, input prices rose 1.4 percent on a monthly basis after rising 0.8 percent in the previous month. The expected rate was 1.1 percent. In September, average home prices grew 11.8 percent from a year ago, up from 10.2 percent in August, the Office for National Statistics said in a separate statement. The median home price in Britain was at a record high of £270,000 in September, £28,000 higher than this time last year.

I expect a state of volatility and instability for the GBP/USD currency pair in the coming days, as investors will continue to balance between the date of raising interest rates by the Bank of England and the US Federal Reserve and measuring the results of economic releases based on those expectations. The general trend on the daily chart is still bearish. The closest support levels for the bears are currently 1.3410, 1.3330 and 1.3240, respectively. On the other hand, in order for the GBP/USD pair to return to the bullish track, the bulls need to breach the 1.3700 resistance again.

Today’s economic calendar is devoid of important British economic releases, and from the United States, the weekly jobless claims and the Philadelphia Industrial Index will be announced. This is in addition to a new round of statements by US monetary policy officials. 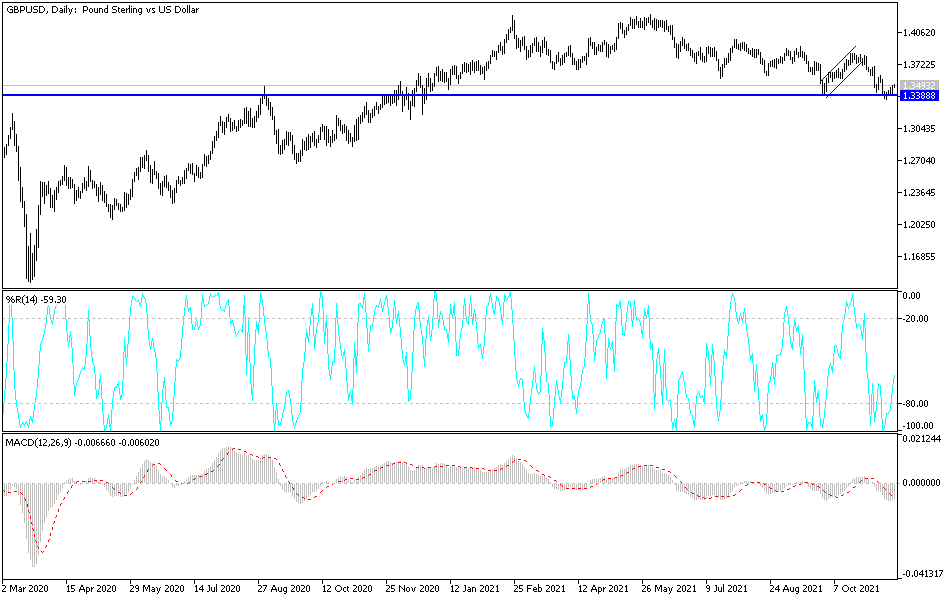