The British pound is entering the new week with supportive momentum after it gained distinction among the top performing major currencies last week. The retracement gains of the GBP/USD currency pair last week reached the 1.3514 resistance level, before correcting down on Friday to the 1.3407 support area before closing trading stable around the 1.3445 level. The performance came despite the market’s apparent “risk off” reaction to news of COVID restrictions being imposed across several Eurozone countries, a backdrop that usually tends to hamper any correction higher in the Forex market.

News that Austria will enter a nationwide lockdown from Monday, along with signs that were looking to tighten regulations, sent the dollar, the yen and the franc higher in a classic “risk off” move. As such, the pound lost ground against these currencies but held ground against the EUR, which is understandable given the focus on the deterioration in the Eurozone. As for the GBP/EUR exchange rate, the closing above the 1.19 level is another bullish development and imposes the possibility of achieving more gains in the coming days and weeks. Commenting on this, “Evidence that the COVID-19 pandemic is spreading again, primarily across the Eurozone, may not help the euro,” says Roberto Mialic, Forex strategist at UniCredit in Milan. “Any pullback attempts still risk turning into a new selling opportunity to the upside.”

Austria became the first country in Western Europe to re-impose a full Covid-19 lockdown, it was announced on Friday. In the same context, neighboring Germany warned that it may follow suit, and the path in cases over the coming days will be decisive in determining the final decision. In fact, we expect financial markets to pay close attention to the case charts for France, Spain and Italy this week as these countries also see an uptick in cases.

The rise in cases may prompt markets to drive expectations of an interest rate hike by the European Central Bank, a market movement that the currency will feel. The market was presenting expectations of future interest rate hikes after noting the sharp rise in inflation rates in the euro area, as money markets showed that the central bank’s move in 2022 was on the table.

Currently, Covid cases in Britain are maintaining a broadly neutral path and there are signs that the country will not follow Europe. Given the positive Covid situation in the UK relative to the EU, combined with the influx of strong economic data last week, the odds of a December rate hike in the Bank of England exceed 50%. Meanwhile, the odds of a move in February are set above 100%.

Expectations of a rate hike from the BoE are proving to be supportive of the GBP and this may provide some support to the bulls at the mid-December policy meeting when the decision is made.

On the daily chart, the price of the GBP/USD currency pair is still at the beginning of forming an ascending channel that is changing from the bearish pressure, and the bulls have to move to the resistance levels 1.3570 and 1.3700 to support the change of the general trend, which will lend momentum to the downside if it succeeds. Bears must get below the support at 1.3390 and then 1.3275. I expect the performance to fluctuate in the coming days in response to any news about Covid cases, closure restrictions, and what will be said by monetary policy officials of both the Bank of England and the US Federal Reserve.

Today’s economic calendar is devoid of important British economic releases, and from the United States, the number of US existing home sales will be announced. 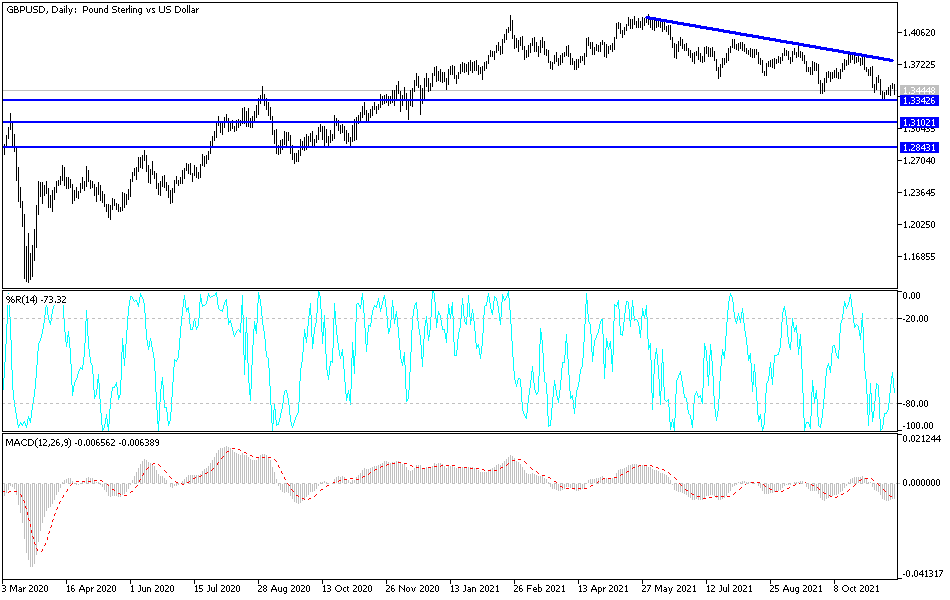