Until now, the GBP/USD upward momentum persisted, but the recent stability warns of the possibility of a price explosion in one of the two directions.

The GBP/USD currency pair maintained its upward momentum that recently pushed it towards the 1.3242 resistance at the beginning of this week’s trading. The pair took advantage of the return of pressure on the US currency as a safe haven with the continuous announcements of strong coronavirus vaccines. The currency pair is stabilizing around 1.3195 at the start of Tuesday’s trading session, awaiting any developments.

It is possible that the British pound will remain directionless against the rest of major currencies in the coming hours and days as investors await developments related to a prospective post-Brexit trade deal, but the lack of a decisive trend does not in any way prevent the British currency from the possibility of sharp fluctuations with increased daily fluctuations.

The European Union and the United Kingdom have a deadline this week for the two sides to reach a new agreement, with focus on the European Union leaders meeting next Thursday when they can agree on a formula that supports markets and investor sentiment. The market will focus on any news – official or unofficial – related to the talks and the British pound will trade accordingly. Despite the desire to agree on a deal this week, media reports indicated over the weekend that due to the outstanding issues, talks will fail to make much progress.

“The hope was to reach an agreement before a videoconference of European Union leaders on November 19, but that seems unlikely,” Said Mikael Milhog, senior analyst at Danske Bank. “The next three weeks will be crucial, and if we are right about the Brexit deal – and we’re still getting more positive vaccine news – we expect the EUR/GBP pair to start moving down towards 0.86.”

Regarding the European/British summit, political analysts say that the two sides will ask for new mandates from their leaders if the deadlock is to be broken.

David Frost, chief negotiator for Brexit, said upon his arrival in Brussels on Sunday: “We are working towards an agreement, but the only thing that is possible is an agreement that is in line with our sovereignty and takes back control of our laws, our trade and our water. This was our consistent position from the start, and I will not change it.” He added: “There has been some progress in a positive direction in recent days. We now largely have the texts of a common treaty, although of course the important elements have yet to be agreed upon. We will work to build on it and get a comprehensive agreement if we can.”

In general, the two sides remain divided over the future access of EU fishing fleets into UK waters and Britain’s ability to depart from EU standards and subsidy rules.

Sean Osborne, Scotiabank’s chief Forex strategist, said: “The UK’s guide to trade negotiations is unlikely to change much, if at all. We still expect that the United Kingdom and the European Union will beat the deadline for last Sunday’s negotiations, possibly to extend it to Wednesday, but with very little chance of an agreement, the British pound is at risk of quickly reversing its recent gains.”

Until now, the GBP/USD upward momentum persisted, but the recent stability warns of the possibility of a price explosion in one of the two directions. This will depend on the results of the ongoing meetings between the European Union and Britain, the strength of the dollar, positivity from the announcement of coronavirus vaccines, as well as global stock markets’ performance and the extent of investors’ risk appetite. So far, stability above the 1.3200 resistance supports bulls dominating the performance and more momentum may push the pair towards resistance at 1.3255, 1.3320 and 1.3400, respectively. In return, failure of the Brexit negotiations will end the pound’s gains quickly, so the pair may be ready to test the 1.3000 psychological support very soon.

The pound awaits new comments from the Governor of the Bank of England. Then the US economic data will follow, which is represented in the announcement of US retail sales numbers, and then industrial production numbers. 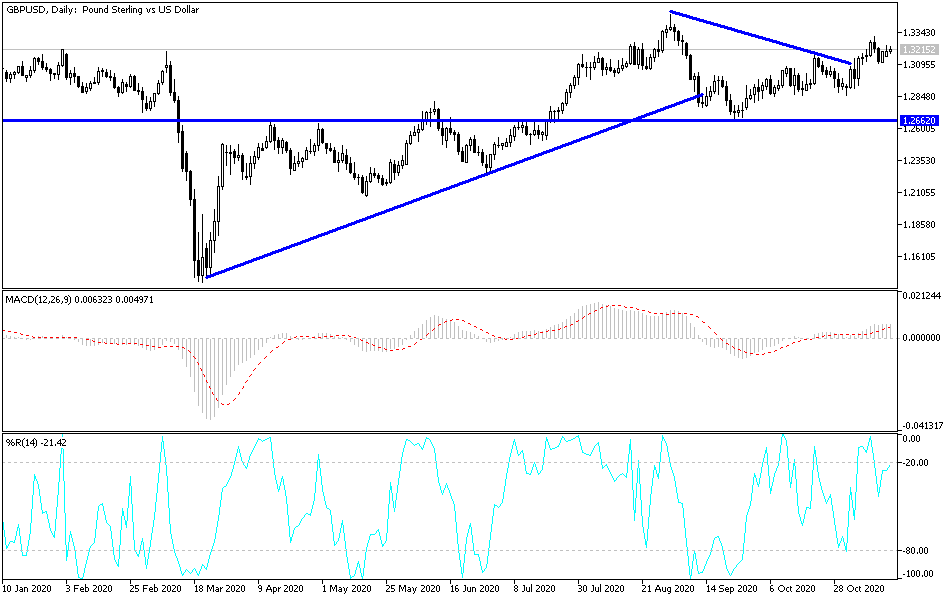