In general, the pair’s gains will be under threat of any definite failure of the EU-UK negotiations.

The pound was second in strength over the course of last week’s trading amid strong performance from global stock markets, as well as possible indications that Downing Street may be about to make concessions in trade talks on Brexit. The influence of that on the GBP/USD pair pushed it towards the resistance level at 1.3313, its highest level in two and a half months. Even with the return of the US currency’s strength against the rest of other major currencies, the bears could not pull the pair below the 1.3100 support, and the currency pair succeeded in closing the week’s transactions stable around the 1.3198 level. At the end of last week, the British pound was the best-performing main currency after surpassing the Australian dollar when it emerged that the closest aide to Prime Minister Boris Johnson, Dominic Cummings, left Downing Street after what was widely described as a power struggle.

It was previously reported that Cummings would remain in office until the end of the year and leave after that, in what some analysts interpreted as a positive omen for the Brexit talks. But the influential advisor was photographed leaving Downing Street through the front door on Friday, carrying a box of belongings. So prominent Brexit activists, including Nigel Farage, expressed concern Friday about what Cummings’ leaving could mean for the Brexit trade negotiations, which are in a critical phase just weeks before the self-imposed deadline, while there still are major differences between the two sides.

Commenting on the pound’s performance, Derek, Head of Research and Global Markets at MUFG, said: “The S&P advanced slightly this week after strong gains last week. Continued risk sentiment was less pronounced in the foreign exchange markets, however, the US dollar reversed some of its losses last week, mainly against the low-yielding Swiss franc and yen. The G10 currencies are becoming more and more related to the stock markets’ performance.”

Cummings’ departure and the sterling gains came after Brexit negotiators postponed trade talks for the weekend after spending another week in a deadlock over “family disputes”, with only days left before the self-imposed deadline in mid-November to strike a deal.

Analysts believe that one factor that may help support the pound in the midst of bad economic news is the hope that Prime Minister Johnson is on the verge of moving first at an important moment in trade negotiations between the UK and the EU. The departure of Lee Caine from Downing Street followed by Dominic Cummings and possibly David Frost raised speculation that the Vote Leave faction had lost influence, and it appears that the British pound is reasonably priced based on our fair value model and recent historical moves. But it is unlikely that any strength will last after a deal given the relative blow from COVID-19 and the potential for trade disruption after the deal.

The EU leaders’ summit on November 16 was described by both sides as a last-minute deadline for striking a deal in time for it to be ratified before the end of the transition period on Dec. 31. However, some analysts say the deal could in fact be late from the European Council meeting scheduled for 10-11 December, which will be followed by the final plenary session of the European Parliament in the following days.

However, in the absence of confirmation that something is in the pipeline, this week’s gains may make the pound sterling vulnerable to a fall in the coming days, especially if the stock markets are unable to hold onto their recent gains, for one reason or another.

According to the performance on the daily chart, the GBP/USD still has the opportunity to complete the upward correction, and the 1.3300 high recorded last week will be important to activate more buying operations to move towards higher resistance levels. In general, the pair’s gains will be under threat of any definite failure of the EU-UK negotiations. The support levels 1.3080 and 1.2980 will be the key to a bears’ strong launch and an end to the current bullish momentum theory.

The currency pair does not expect any important or influential economic data today, and it will be affected by the extent of investors’ risks appetite, along with the path of global stock markets. 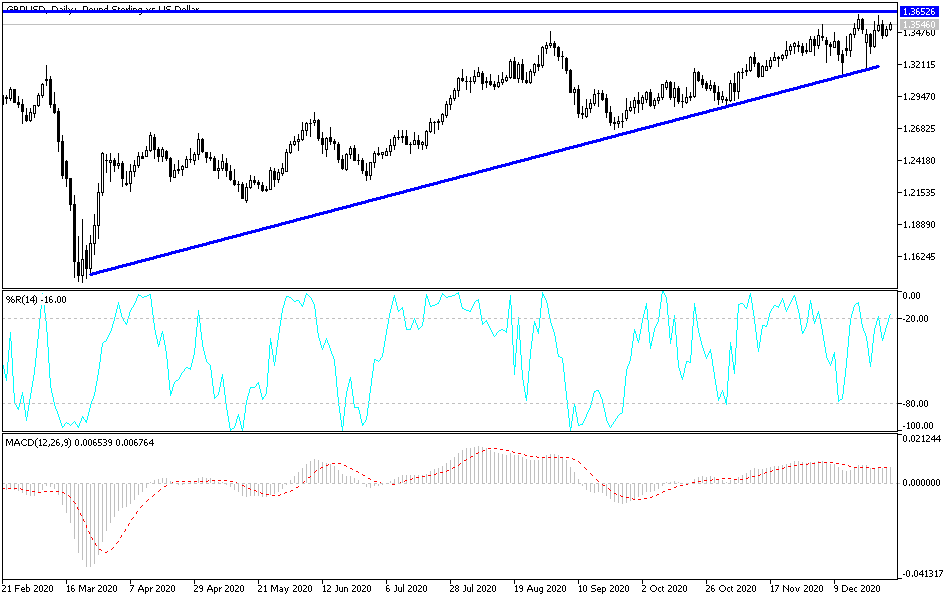