In the near term, and according to the performance on the hourly chart, it appears that the GBP/USD currency pair is trading within an upward channel.

For seven trading sessions in a row, the GBP/USD pair was in an upward correction range with a distinguished performance. This culminated in a move towards the 1.3280 resistance, its highest level in two months, and is stable near it at the time of this writing. Although the dollar’s ​​losses stopped after the announcement of the US presidential election results, the pound remained supported by optimism that Trump’s loss would pressure both sides of Brexit – the European Union and Britain – to work more seriously to avoid a no-deal Brexit.

The unemployment rate in Britain matched the three-month period ending September 30, with expectations of a 4.8% rise from the previous period of 4.5%. The change in the number of claimants for the month of October exceeded the expected change of 36,000 claims, recording a -29.8,000, while the number of claimants decreased to 7.3% from 7.4%. On the other hand, the average earnings including bonuses for the 3-month period outpaced the expected change (annually) by 1.1% with a change of 1.3%. The equivalent change came excluding bonuses of 1.9% against expectations of 1.5%. Prior to that, corresponding retail sales for October were released below expectations (year-on-year) at 8.4%, with a change of 5.2%.

However, reports by the Office for National Statistics indicate that job vacancies have continued to recover in the recent period, but are still below pre-COVID-19 levels. Working hours – which some economists see as a key signal – are still low, but are showing signs of recovery. The Office for National Statistics says that from April to June 2020 and from July to September 2020, total actual weekly working hours in the UK saw a record increase of 83.1 million, or 9.9%, to 925 million hours. Actual average weekly work hours saw a record quarterly increase of 2.7 hours to 28.5 hours.

Despite the improvement, hours are still said to be 12% less than pre-pandemic levels.

The British government has insisted that it will press ahead with legislation that breaches the legally binding Brexit treaty with the European Union, despite rejection of the bill by the Senate. The House of Lords voted by large margins late Monday to strip the Home Market Bill provisions that gives the Conservative government the power to break portions of the divorce pact it signed with the European Union before the UK left the bloc in January.

Prime Minister Boris Johnson’s government acknowledges that the bill violates international law, and the legislation has been condemned by the European Union, US President-elect Joe Biden and dozens of British lawmakers, including many of Johnson’s conservative party. But the British government believes the bill is necessary as an insurance policy to ensure smooth trade between all parts of the UK – especially Northern Ireland, which shares borders with the European Union – regardless of what happens to the trade between the UK and the European Union after Brexit. Critics say it could undermine peace in Northern Ireland by conducting border checks along the currently invisible border between Ireland and Northern Ireland.

In the near term, and according to the performance on the hourly chart, it appears that the GBP/USD currency pair is trading within an upward channel. This indicates a slight upward slope in the short term in market sentiment. Accordingly, bulls will look to ride the current bullish wave by targeting profits at around 1.3276 or higher at 1.3337. On the other hand, bears will be looking to jump on short-term pullback gains around 1.3171 or lower at 1.3107. 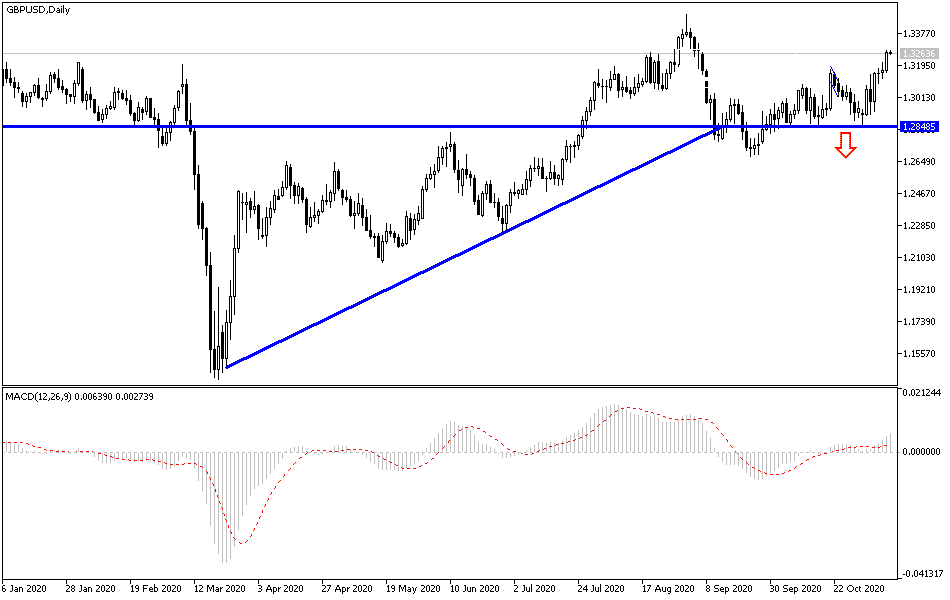