For two days in a row, the GBP/USD has had bearish setbacks that pushed it towards the 1.3641 support level, the lowest in more than two weeks. The pound has rebounded from its October highs against the dollar and further losses are likely in the coming days, especially if the Bank of England disappoints the markets by staying away from raising interest rates. With that in mind, keep an eye out for the pivotal Federal Reserve meeting on Wednesday where details of the quantitative easing program are expected to be announced.

The dollar rose in value at the end of last week’s trading in response to some disappointing US economic data, reminding us of how important the dollar is not only to the GBP/USD but also to the Forex market in general. Technical studies indicate that the balance of risks in the near term (the period covering the next few days) is pointing to a decline.

The British central bank could raise interest rates by 15 basis points, a decision that investors have been expecting for most of the past month according to money market pricing. Faced with rising inflation, members of the Bank’s Monetary Policy Committee (MPC) spoke of the need to raise interest rates to ensure inflation expectations among businesses and consumers do not rise.

Therefore, the decision to raise interest rates will be in line with the bank’s main role in protecting price stability in the economy. However, it should be noted that the odds of a rally in November have subsided over the past week while the odds of a rally in December have increased, according to money market pricing. Repricing in favor of a December rate hike in recent days may explain why the GBP/USD has lost some upward momentum.

Some BOE MPs will prefer to wait for December because they will have the full set of official labor market data since the government’s holiday plan ended in September. This will give policy makers an idea of ​​how strong the labor market is and also suggest that the November labor market report (scheduled for November 16) may be the single most important event in the remainder of the year for the British pound.

A better-than-expected labor market report could give the MPC needed cover for a December rate move, while a softer-than-expected result could provide enough hesitation to drive any rate hike in 2022. And if the bank abandons a November rate hike, the pound may fall initially, but losses could be strong if the bank provides guidance indicating a possible interest rate hike in December – provided the November labor market report is strong.

Goldman Sachs said it would be difficult for the BoE to over-delivery significantly at this point, and created room for disappointment if the MPC steered towards a more “calculated” pace. Such a “calculated pace” would be a 15 basis point increase in November, followed by a 25 basis point increase in February, which is what Goldman Sachs currently expects.

On the daily chart, there is an attempt by the GBP/USD to form a bearish channel that will strengthen by moving below the 1.3600 support, which might give the bears the momentum to move towards the support levels 1.3545 and 1.3480. Those expectations may change if the bulls return to the vicinity of the 1.3840 resistance level again. The GBP/USD currency pair is not awaiting any important and influential economic data today, and therefore investor sentiment will be the main driver of the currency pair. 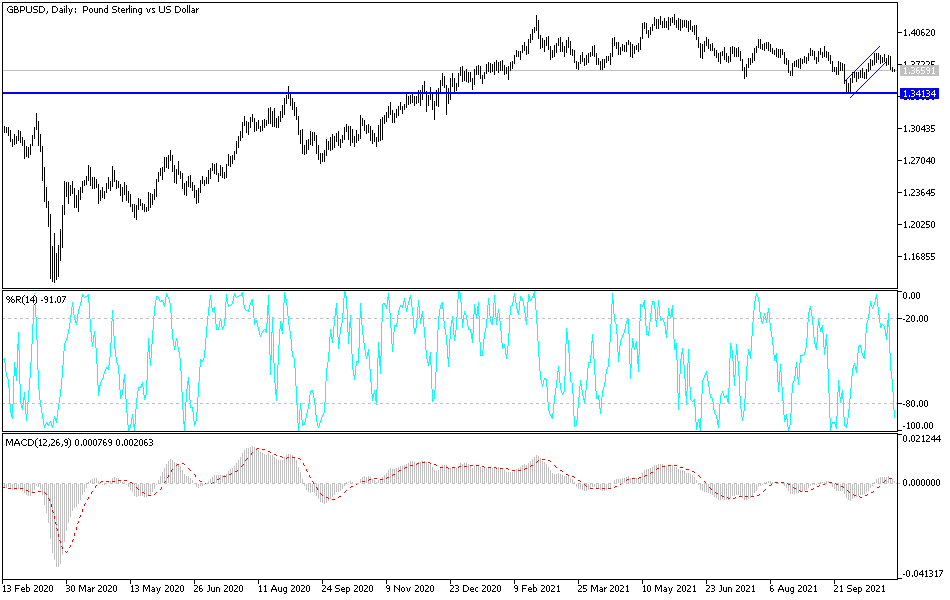