The British pound was subjected to several pressure factors that weakened it against the rest of the other major currencies recently.  The GBP/USD pair moved towards the 1.3726 support level after three bearish trading sessions, today settling around the 1.3775 level as of this writing. In general, families affected by the risks of high taxes contributed to pressure on the exchange rate of the pound. And according to new research, the UK government’s decision to raise taxes will set back the recovery in UK household spending for up to a year.

The research has found that the Bank of England will disappoint a large number of investors anticipating a rate hike in the second quarter of 2022, a disappointment that is likely to weigh on sterling. “Markets are still expecting the MPC to raise interest rates in the second quarter of 2022, despite surprise plans to raise National Insurance in April,” says Samuel Tombs, chief UK economist at Pantheon Macroeconomics. “The tax hike will delay the full recovery in household spending until the second half of next year.”

Sterling has proven vulnerable to tax hike announcements, falling after British Prime Minister Boris Johnson told the House of Commons that the increases were needed to pay for additional NHS spending and social care. The government said it would look to increase National Insurance contributions from both employees and employers by 1.25 percentage points, while increasing dividend taxes.

In March, it was highlighted by markets and investors that the UK was the most generous among the developed world economies after Chancellor Rishi Sunak announced the budget, and that this might help the pound. On the ground, however, it is now spinning in the opposite direction. After the announcements, widespread weakness was observed in most of the pound exchange rates, indicating that the currency was under pressure especially as further losses against the euro and the dollar are likely over the coming days.

Commenting on what happened, KBC Markets analyst Matthias van der Jugt says that any weakness in sterling resulting from these announcements may be short-lived. “The pound has underperformed the euro a little bit, but at the moment the impact on the pound of the British government raising taxes to fund the healthcare bill is still limited,” he said.

But the macroeconomic pantheon crunched the numbers and found that government tax increases are likely to have consequences for UK consumer behavior – a driver of the UK’s services economy – moving forward. So experts say it is “large enough to slow the economic recovery next year”.

National Insurance contributions are charged to earnings over £120 a week, or £6.2k a year.

Cuts in the UK’s economic growth rate are significant for the pound’s outlook and leave it exposed at current levels. After all, Forex valuations tend to reflect expectations for one economy relative to another, and if the Eurozone and US economies show better growth rates, the British pound may give up its value against the euro and dollar over time.

On the daily chart, the GBP/USD pair broke the lower line of the rising channel that was formed recently. Moving towards and below the support level at 1.3700 will push the currency pair to continue the general trend in the long term, which is still bearish. After the emergence of the recent pressure factors, the currency pair’s gains will remain subject to selling again. The closest targets for the bulls are currently 1.3830, 1.3920 and 1.4000. The most important targets for the bears will be 1.3685 and 1.3600.

The currency pair is not anticipating any important British economic data and the focus will be on the weekly jobless claims announcement ,as well as the statements of many US monetary policy officials. 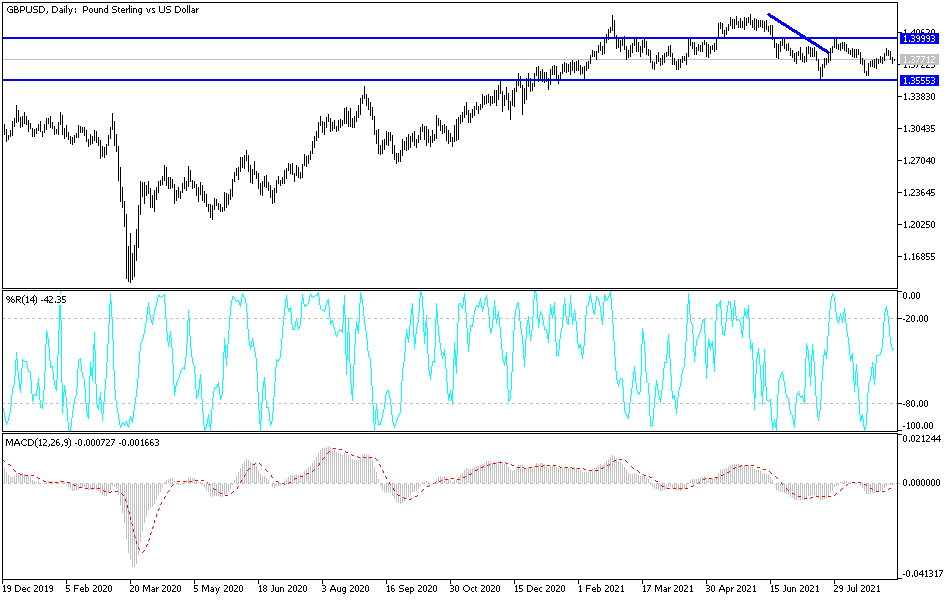